This page can be viewed at http://www.historycommons.org/entity.jsp?entity=lisa_beamer_1

Lisa Beamer was a participant or observer in the following events:

September 13, 2001: Company Head Possibly Aware of Todd Beamer Phone Call Before it is Made Public

Larry Ellison. [Source: Mike Kepka / San Francisco Chronicle]The head of the company for which Flight 93 passenger Todd Beamer worked appears to be aware of Beamer’s call from the plane before its existence has been made public, and before even Beamer’s wife has been informed of it. Larry Ellison is the CEO of software company Oracle Corporation. In a memo sent out to the company’s employees, he writes, “We know Todd Beamer is dead. We believe he died when he and other passengers aboard Flight 93 tried to recover the hijacked airplane from the terrorists.… Considering the devastation wrought by the other aircraft, it is unquestionable that Todd’s brave actions, and [those] of his fellow passengers, saved countless lives on the ground.” Beamer’s wife Lisa later writes, “Clearly Larry was convinced that Todd had been involved. How did Larry know that? The FBI hadn’t made any announcement to that effect. Todd’s name had not shown up in any reports indicating that he might have been involved in some way.” The explanation she proposes is that “Larry, like many of us, couldn’t imagine Todd Beamer sitting idly by while terrorists threatened to hurt others.” (Cowley 9/13/2001; Associated Press 9/14/2001; Beamer and Abraham 2002, pp. 184-185) Todd Beamer had spoken for 13 minutes to GTE supervisor Lisa Jefferson before Flight 93 crashed (see 9:45 a.m.-9:58 a.m. September 11, 2001). Yet the FBI has instructed Jefferson not to inform Beamer’s wife of the call, and only lifts this restriction on September 14. Lisa Beamer first learns of her husband’s call from Flight 93 on September 14, in a phone call from United Airlines (see September 14, 2001). (McKinnon 9/22/2001; Breslau, Clift, and Thomas 12/3/2001; Jefferson 2006) Ellison and Oracle long have had close ties to US intelligence agencies, and in fact the company’s name originated from a CIA project code-named “Oracle.” (Wallack 5/20/2002) 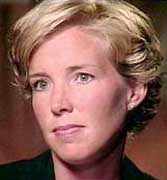 Lisa Beamer. [Source: NBC]Since 9/11, Lisa Beamer—whose husband Todd Beamer died on Flight 93—has reportedly had one “nagging question.” According to Newsweek, she’d wondered, “Why had her husband, a man so attached to his cell phone that [she] had to confiscate it when they went on vacation, not called her from the plane? Other passengers had called home from Flight 93 to say goodbye and talk to their loved ones. Why not Todd?” (Breslau, Clift, and Thomas 12/3/2001) This evening, she receives a call from her family liaison with United Airlines, informing her that the FBI has released information that Todd made a call from the flight: Using a GTE Airfone, he’d spoken to an operator in the Chicago area. The FBI had been keeping the information private until it reviewed the material. The liaison reads her a summary of the call written by Lisa Jefferson, the GTE supervisor with whom Todd had spoken (see 9:45 a.m.-9:58 a.m. September 11, 2001). (Beamer and Abraham 2002, pp. 185-186) During the call, Jefferson had asked Todd if he’d wanted to be connected to his wife. However, as Jefferson later recalls, he’d “said no, that he did not want to upset her as they were expecting their third child in January.” (Smith 9/5/2002) Instead, he’d asked Jefferson to contact his family if he didn’t “make it out of this.” (Longman 2002, pp. 200) In her book, published in 2002, Lisa Beamer writes that she was “so glad he didn’t” contact her from the plane, because, “Had I learned about Todd’s circumstances by hearing his voice from the plane, I no doubt would have lost it.” While Lisa Beamer only learns of her husband’s call from Flight 93 on this day, the CEO of the company for which he’d worked appears to have been aware of its details a day earlier (see September 13, 2001). (Beamer and Abraham 2002, pp. 184-185 and 201-202)