This page can be viewed at http://www.historycommons.org/entity.jsp?entity=louis_west_1

Louis West was a participant or observer in the following events: 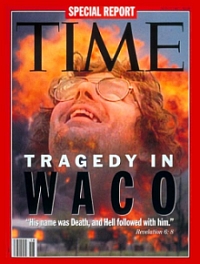 The May 3, 1993 cover of Time magazine featuring its special report on David Koresh and the Branch Davidians. [Source: Time]Time magazine publishes a lengthy series of articles on David Koresh (see November 3, 1987 and After) and the Waco, Texas, Branch Davidians (see March 1, 1993 and April 19, 1993) titled “Tragedy in Waco.” Among its articles is a profile of Koresh that characterizes him as a cult leader and a psychopath. Of his near-total control over his followers, Time writes: “In the manner of cult leaders before him, Koresh held sway largely through means that were both more subtle and more degrading. Food was rationed in unpredictable ways. Newcomers were gradually relieved of their bank accounts and personal possessions. And while the men were subjected to an uneasy celibacy, Koresh took their wives and daughters as his concubines” (see February 27 - March 3, 1993). The profile notes Koresh’s “mangled theological rationale” as the “Second Coming” of Jesus Christ in a sinful, mortal form. It discusses what it calls his “creamy charm and a cold-blooded willingness to manipulate those drawn to him,” and says “students of cult practices” readily recognize his type: “He was the most spectacular example since Jim Jones, who committed suicide in 1978 with more than 900 of his followers at the People’s Temple in Guyana. Like Jones, Koresh fashioned a tight-knit community that saw itself at desperate odds with the world outside. He plucked sexual partners as he pleased from among his followers and formed an elite guard of lieutenants to enforce his will. And like Jones, he led his followers to their doom.” UCLA psychology professor Louis West calls Koresh a psychopath, and explains: “The psychopath is often charming, bright, very persuasive. He quickly wins people’s trust and is uncannily adept at manipulating and conning people.” Former Davidian David Bunds, who left the Waco compound in 1989, says Koresh was preparing his followers for the Apocalypse and mortal death for years. “Koresh would say we would have to suffer, that we were going to be persecuted, and some of us would be killed and tortured,” Bunds recalls. Psychologist Murray Miron, who advised the FBI during the standoff, says: “The adulation of this confined group work on this charismatic leader so that he in turn spirals into greater and greater paranoia. He’s playing a role that his followers have cast him in.” In a sense, the article concludes, both Koresh and the Davidians gave one another what they needed. The Davidians confirmed Koresh’s belief that he was the son of God and destined for a martyr’s death. He helped them bring their spiritual wanderings to a close. The article concludes with the following: “In the flames of last week, they all may have found what they were searching for.” (Lacayo, Cole, and Woodbury 5/3/1993)