This page can be viewed at http://www.historycommons.org/entity.jsp?entity=lyglenson_lemorin_1

Lyglenson Lemorin was a participant or observer in the following events:

June 23, 2006: “Miami Seven” Arrested in Connection with Sears Tower Plot, but Capability of Plotters Is Doubted 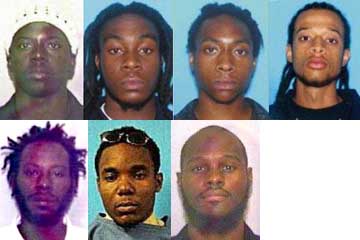 The Miami Seven. Group leader Narseal Batiste is on the bottom right. [Source: BBC]Police arrest seven people during a raid on a warehouse in the Miami area. The men are alleged to be a “home-grown” terrorist cell plotting to blow up the Sears Tower in Chicago and the FBI building in Miami, as well as possible other unspecified targets. They had allegedly conducted video surveillance of their targets. (CNN 6/23/2006) The men are identified in the federal indictment as Narseal Batiste, Patrick Abraham, Stanley Grant Phanor, Naudimar Herrera, Burson Augustin, Lyglenson Lemorin, and Rotschild Augustine. (FindLaw 6/22/2006) Two are Haitians, five are US citizens, and two are US immigrants. (Democracy Now! 6/26/2006) Vice President Dick Cheney describes them as a “a very real threat.” (Thompson and Baxter 6/25/2006) Bruce Hoffman, a counterterrorism expert who heads the Washington office of the Rand Corp., says that “amateur terrorists can kill as effectively as the professional kind.” (Whoriskey and Eggen 6/24/2006) However, officials concede that the group never had any contact with any other terrorist groups, including al-Qaeda. (BBC 6/23/2006) Officials also admit that the men had not acquired any explosives or weapons. Chicago Police Superintendent Philip Cline says “there was never any danger to the Sears Tower or Chicago.” Deputy FBI Director John Pistole says that the plot had not progressed beyond early planning stages and “was aspirational rather than operational.” Hoffman says that it is “not clear is whether they had any real capabilities to pull [the plot] off.” (Whoriskey and Eggen 6/24/2006) An FBI informant posing as an al-Qaeda operative had infiltrated the group for nearly six months and many conversations were recorded. (Pincus 9/2/2006) Batiste, the leader of the group, allegedly stated that he and his “soldiers” wanted to receive terrorist training in order to wage a “full ground war” against the US and to “kill all the devils we can.” (BBC 6/23/2006) He requested boots, uniforms, machine guns, radios, vehicles, and $50,000 in cash from the informant. However, the men were only able to acquire military boots and a video camera. The indictment indicates that the men lacked any real resources; these organizational problems caused the plot to peter out by May. (Whoriskey and Eggen 6/24/2006) Critics accuse the FBI of running a border-line entrapment operation in which a plot that was virtually a pipe-dream was kept alive by the involvement of the informant. Max Rameau of Miami CopWatch points out that the military gear and cameras had been supplied to the men by the government, via the informant. (Democracy Now! 6/26/2006) Court records would later show that not only did the government provide materiel to the group, but the informant also suggested the Miami FBI office as the first target. The records show that the informant, known as CW2, played a key role in the advancement of the plot, such as administering the “al-Qaeda oaths” taken by the men. At a detention hearing, judge Ted E. Bandstra says that the allegations are “disturbing,” but adds that “the plans appear to be beyond the present ability of these defendants.” (Pincus 9/2/2006)

The trial of the “Miami Seven” results in a deadlocked federal jury after nine days of deliberations, with one man, Lyglenson Lemorin, acquitted and a mistrial declared for the other six. The men each faced four terrorism-related conspiracy charges that carry a combined maximum of 70 years in prison. The charges relate to an alleged terrorist cell formed by the men, who hoped to forge an alliance with al-Qaeda to carry out bombings against the Sears Tower in Chicago, the FBI’s Miami office and other federal buildings (see June 23, 2006). The group operated out of a warehouse in the Liberty City section of Miami. (Anderson 12/13/2007) The arrests of the men in 2006 were heralded as a major victory for the Bush administration’s “War on Terror.” Then-US Attorney General Alberto Gonzales warned that, if “left unchecked, these homegrown terrorists may prove to be as dangerous as groups like al-Qaeda.” The alleged plot was used as an example of the government’s post-9/11 improvements to counter-terrorism methods. The men were members of the Moorish Science Temple, a sect that blends Islam, Christianity and Judaism and does not recognize the legitimacy of the US government. The majority of the evidence in the case came from an FBI Middle Eastern informant, Elie Assad, posing as an al-Qaeda operative named “Brother Mohammad.” He had worked for the FBI for years before he approached Narseal Batiste, the alleged ringleader. Among the evidence he obtained was a recording from March 16, 2006 in which the men vowed to act as “Islamic soldiers” for al-Qaeda. Other evidence included a further 12,000 recorded conversations, including one in which Batiste spoke of waging a “ground war.” The prosecution also presented surveillance photos some defendants took of federal buildings in Miami, wish lists of weapons, and a request for $50,000 made to the informant. Batiste claimed during the trial that he was conning the informant, just as the informant was conning him. He says he was desperate for money to aid his failing construction business, so he went along with the informant in hopes of tricking him into giving him $50,000. (Ripley 12/13/2007) The mistrial and acquittal is considered a major loss for the government and its strategy of pre-emptive prosecution of suspected terrorists. The jury of six men and six women twice sent notes to the presiding judge indicating they could not reach verdicts but were told to keep trying. The mistrial came after their third vote. (Anderson 12/13/2007) The jury foreman, Jeffrey Agron, says, “It was a very difficult case with a lot of evidence… people see evidence in different ways. There were different takes that people had.” A large part of the defense was based on the extensive FBI involvement in the plot: the warehouse was paid for by the FBI and the defendants moved their operations there at the suggestion of the FBI informant. The vows to al-Qaeda were instigated by the informant, who even suggested the bombing of the Miami FBI office. Defense attorney Albert Levin says, “The case was written, produced and directed by the FBI.” Attorney Joshua Dratel, who has defended several suspects in terrorism cases, says: “[A]re we interested in finding terrorists or creating them? Even in cases where people are found guilty, I’m not sure that [this strategy] is necessarily finding people who are a genuine danger. What it’s really doing is finding people who—with enough inducement and encouragement—may do something. But whether they would ever do anything on their own, we’ll never know.” A new trial is scheduled for next year. (Ripley 12/13/2007)