This page can be viewed at http://www.historycommons.org/entity.jsp?entity=marc_h._morial

Marc H. Morial was a participant or observer in the following events:

Mayor Ray Nagin, a Democrat and a former cable television executive, is sworn into office as the mayor of New Orleans Parish, succeeding Marc H. Morial. (US Conference of Mayors 5/13/2002; Josh Fecht 9/28/2005) 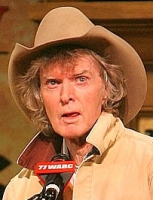 Don Imus. [Source: New York Post]CBS fires radio host Don Imus over Imus’s racially inflammatory characterization of the Rutgers women’s basketball team as a group of “nappy-headed hos” (whores). On April 4, 2007, Imus called the Rutgers team, which has eight African-American and two white players, “nappy-headed hos” immediately after the show’s executive producer, Bernard McGuirk, called the team “hard-core hos.” McGuirk also said the NCAA championship game between Rutgers and Tennessee was a “Spike Lee thing” between “the Jigaboos [and] the Wannabees,” referencing the 1988 Lee film School Daze, which depicted a rivalry on an all-black college campus between the darker-skinned “Jigaboos” and the lighter-skinned “Wannabees.” CBS president Leslie Moonves says in a statement, “There has been much discussion of the effect language like this has on our young people, particularly young women of color trying to make their way in this society.” Civil rights and women’s rights groups around the country have called on CBS to fire Imus from its radio programming for almost two years. Marc Morial of the National Urban League recently said, “It’s important that we stand with the women of Rutgers who are deeply hurt by the highly insensitive comments of Don Imus.” Imus is a prominent, conservative-libertarian radio host who was recently named one of the 25 Most Influential People in America, and is a member of the National Broadcaster Hall of Fame. Last week, MSNBC dropped its simulcast of Imus’s program after Imus insulted the Rutgers athletes. Civil rights activist Jesse Jackson, who along with the Reverend Al Sharpton met with Moonves over the controversy, says Imus’s firing is “a victory for public decency. No one should use the public airwaves to transmit racial or sexual degradation.” Sharpton adds: “He says he wants to be forgiven. I hope he continues in that process. But we cannot afford a precedent established that the airways can commercialize and mainstream sexism and racism.… It’s not about taking Imus down. It’s about lifting decency up.” Imus has apologized for his words and called his comments “really stupid.” Imus asked for the opportunity to apologize to the Rutgers athletes in person; though the meeting took place on April 12 with the blessing of coach C. Vivien Stringer, it was not enough to save Imus’s position. (Media Matters 4/4/2007; Nichols and Siemaszko 4/13/2007; CBS News 2/11/2009)

January 1-3, 2012: Republican Presidential Candidate Says He Will Not Improve African-Americans’ Lives ‘by Giving Them Someone Else’s Money’; Controversy over Candidate’s Word Choice Ensues