This page can be viewed at http://www.historycommons.org/entity.jsp?entity=marcia_boehm_1

Marcia Boehm was a participant or observer in the following events: 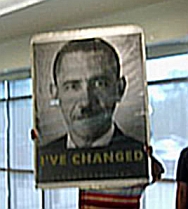 An anti-reform protester displays a large sign depicting President Obama as Adolf Hitler. [Source: Daily Kos]House Representative John Dingell (D-MI), an 83-year-old advocate of health care reform, hosts a “town hall” meeting in Romulus, Michigan, to discuss the Obama administration’s plans to reform health care. The forum has so many people attempting to participate that its organizer, the local chapter of the American Association of Retired Persons (AARP), says it will sponsor a second forum at a later date. Like many other forums where health care is a primary topic of discussion, anti-health care protesters attempt to disrupt and dominate the discussion by shouting down and chanting over Dingell and other audience members (see June 30, 2009, July 6, 2009, July 25, 2009, July 27, 2009, July 27, 2009, July 31, 2009, August 1, 2009, August 1, 2009, August 2, 2009, August 3, 2009, August 3, 2009, August 3, 2009, August 3, 2009, August 4, 2009, August 4, 2009, August 5, 2009, August 5, 2009, August 6, 2009, and August 6-8, 2009).
Louder and Angrier Participants Garner More Media Coverage - One audience participant, health care reform supporter Chris Savage, writes about the forum on the liberal blog Daily Kos. Savage also takes a photograph of an anti-health care reform protester carrying a large sign depicting President Obama as Adolf Hitler. He says that anti-reform protesters outnumber supporters approximately five to one. In the Huffington Post, Savage later writes: “Typically, the more hysterical the person’s message was or the more angrily they shouted, the more likely they were to get attention from the press. The young black man with the Obama-as-Hitler poster was the busiest one of them all.”
Shouting Down Participants from Outset - Even before the event begins, protesters are shouting and catcalling, with one woman yelling to an elderly reform supporter: “You may be dead in five years! They may euthanize you!” AARP official Erick Schneidewind is shouted down with calls of “Traitor!” and “Liar!” before he can even introduce himself. One disabled woman, Marcia Boehm, attempts to tell her story—how she lost her health care in December 2008 and her pre-existing conditions make it difficult for her to get new coverage—but is shouted down by protesters who scream, “I shouldn’t have to pay for your healthcare!” and “Get government healthcare!” After Dingell takes the podium, another protester, Mike Sola, approaches him, pushing his son before him in a wheelchair. The man accuses Dingell of participating in a government plan to kill his son, who has cerebral palsy, by denying him health care. When Dingell denies the charge, the man begins shouting “Liar!” over and over, and trying to push forward into Dingell’s personal space with his wheelchair-bound son. He is prevented from getting within touching distance by Dingell staffers; he is soon escorted out by police officers. The Daily Kos blogger writes that no matter what Dingell attempts to say, he is countered and sometimes drowned out by screams and chants of “Liar!” “Traitor!” “Bullsh_t!” “Did you even read the bill?” (Dingell helped write the House version of the bill.) “The goverment is going to kill us when we are older!” “The goverment is providing abortion money!” and other shouts, boos, catcalls, and chants. One protester in the second session, Matt McCormack, is particularly noticeable; after the first few minutes of the meeting, where he repeatedly shouts phrases like “Look at me! Look at me! You are being used!” he begins a loud conversation on his cell phone, looking up periodically to scream “Liar!” at inappropriate moments, like when questions are being asked. McCormack later stands up, launches a spate of invective towards Dingell, and storms towards the podium, but is intercepted by police and escorted outside. On his blog, McCormack later claims to have been arrested.
Attempts at Confrontation Outside Hall - Savage reports that outside the hall, anti-reform protesters attempt to provoke a physical confrontation with him, apparently in an attempt to create a disturbance for the media. One protester tells the blogger’s son, “Your dad is a coward!” for refusing to argue with him. (Daily Kos 8/6/2009; Anstett and Gray 8/6/2009; Savage 8/10/2009)
Many from Outside District - Almost half of the attendees who sign in to the event put down addresses outside of Dingell’s district. The Huffington Post will note, “In short, the sign-in sheets lend credence to the accusation that the protests are the product of Washington-based ‘Astroturf’ organizations, rather than evidence of a groundswell of popular resistance to health care reform.” (Grim 8/11/2009)
Refusing Offer to Meet One-on-One, Claims Intimidation - Dingell later offers Sola the chance to meet with him one-on-one to discuss his concerns over his son’s health care coverage, but Sola refuses. Dingell writes: “The offer still stands.… I have served in Congress and I have seen enough in my lifetime to know that the cause before us is too vital, too necessary, and too timely to allow it to fail. I remember many times in my career and in my life when powerful forces tried to stop progress. We cannot let this happen and we cannot allow this opportunity to go by without providing that each and every American has health care. As long as I have a vote, I will not let shouting, intimidation, or misinformation deter me from fighting for this cause.” (US House of Representatives 8/7/2009) Sola will later tell a Fox News interviewer that one or more “liberal thugs” visit his house later in the evening to attempt to intimidate him. These “thugs” are supporters of House Speaker Nancy Pelosi (D-CA), Sola claims, and says that if he experiences a second such visit, he will use “lethal force” to protect his family. (Kuznia 8/10/2009)