This page can be viewed at http://www.historycommons.org/entity.jsp?entity=mary_jo_kilroy_1

Mary Jo Kilroy was a participant or observer in the following events: 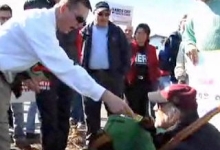 Tea party protester Chris Reichert berates pro-reform protester Robert Letcher. [Source: Columbus Dispatch]During a tea party protest against the Democratic attempt to reform health care in front of the Columbus, Ohio, office of Representative Mary Jo Kilroy (D-OH), one protester, Chris Reichert, confronts a counter-protester, Robert Letcher, and verbally mocks his illness. Letcher suffers from Parkinson’s disease, and when Reichert accosts him, is sitting down in front of the anti-reform protesters carrying a sign announcing his illness. The sign reads: “‘Got Parkinson’s?’ I Do and You Might. Thanks for helping! That’s community!” The incident begins when an unidentified man berates Letcher, saying: “If you’re looking for a hand-out, you’re on the wrong end of town. Nothing for free over here, you have to work for everything you get.” Reichert then steps out of the crowd, bends over Letcher, waggles his finger in Letcher’s face, throws a pair of dollar bills in his face, and says: “I’ll pay for this guy. Here you go. Let’s start a pot, I’ll pay for you.” He throws more dollar bills at Leichert, and shouts: “I’ll decide when to give you money. Here. Here’s another one.… No more handouts.” Letcher, a former nuclear engineer who was diagnosed with Parkinson’s in 2000, later explains: “I feel I embody the controversy that was being fought out. No one was engaging, everyone was screaming. I thought, I don’t have to scream, I just have to be there. I walked over and sat down.… I sort of presented myself as an argument by myself.” Kilroy and Democratic supporters immediately condemn Reichert’s actions, and Kilroy enters a link to a YouTube video of the incident into the Congressional Record. Reichert initially denies doing anything of the sort, but the videos prove his involvement. He eventually admits his actions, and will explain: “I snapped. I absolutely snapped and I can’t explain it any other way.” He will continue: “He’s got every right to do what he did and some may say I did too, but what I did was shameful. I haven’t slept since that day. I made a donation [to a local Parkinson’s disease group] and that starts the healing process.… I wanted this to go away, but it won’t and I’m paying the consequences.” Reichert will go on to say that he fears for the safety of himself and his family after reading some of the comments people have posted on the Internet. “I’ve been looking at the Web sites,” he will say. “People are hunting for me.” Reichert says he is a registered Republican, but is not politically active: “That was my first time at any political rally and I’m never going to another one. I will never ever, ever go to another one.” (Candisky 3/17/2010; Elliot 3/19/2010; Candisky 3/24/2010; Magloff 3/25/2010) The progressive news blog TPM LiveWire later says Reichert may be connected to the conservative lobbying group Americans for Prosperity (AFP). The videos show him carrying an “I am AFP!” sign under his arm. AFP’s Ohio director, Rebecca Heimlich, says she does not know either Reichert or the other man who berates Letcher in the video. She states: “I have seen the video and found [Reichert]‘s behavior completely inappropriate. Americans for Prosperity certainly does not encourage or condone harassing behavior. Our goal is to send a message to Rep. Kilroy that we oppose this health care takeover bill. We always encourage our members to be considerate of others in their demonstrations.” AFP is a financial supporter of a number of tea party organizations, and sometimes helps the groups coordinate their rallies and actions. (Elliot 3/22/2010; Elliot 3/24/2010)