This page can be viewed at http://www.historycommons.org/entity.jsp?entity=matt_rosenberg

Matt Rosenberg was a participant or observer in the following events:

Sergeant Matt Rosenberg, an army medic at the Pentagon, is studying “a new medical emergency disaster plan based on the unlikely scenario of an airplane crashing into the place.” (Maraniss 9/16/2001) The day before, Rosenberg later recalls in an interview with the Office of Medical History, he called the FBI with questions about who would have medical jurisdiction if such an event were to take place. “Believe it or not, the day prior to the incident, I was just on the phone with the FBI, and we were talking ‘so who has command should this happen, who has the medical jurisdiction, who does this, who does that,’ and we talked about it and talked about it, and he helped me out a lot. And then the next day, during the incident, I actually found him. He was out there on the incident that day.” (Marble and Milhiser 9/2004, pp. 9)

Shortly After 9:37 a.m. September 11, 2001: Some Pentagon Medical Workers Initially Think Evacuation Is Part of a Drill

Paul Carlton Jr. [Source: Publicity photo]A number of medical workers at the US Army’s DiLorenzo Tricare Health Clinic (DTHC) initially believe the evacuation in response to the Pentagon attack is part of a training exercise. The DTHC is located in the basement on the east side of the Pentagon, more than 1,000 feet from where the building was hit, and therefore many of the people there did not feel or hear the impact when the attack occurred. (Boivin 9/24/2001; Goldberg et al. 2007, pp. 107-108; Creed and Newman 2008, pp. 57-58)

After being told to get out of the clinic, Captain Jennifer Glidewell leaves along with Sergeant Matthew Rosenberg. According to Glidewell, they are “thinking fire drill.” They head for the Pentagon’s center courtyard where they see an injured man running and screaming, with his face burnt and the skin hanging off. According to authors Patrick Creed and Rick Newman, Glidewell initially thinks this is “the best moulage job she had ever seen. Moulage was the makeup medical practitioners put on mock patients during exercises, to simulate injuries.” When she realizes the injuries are genuine, she grabs her radio and yells into it: “This is not a drill! This is real!” (Marble and Milhiser 9/2004, pp. 19; Creed and Newman 2008, pp. 57-58)

Sergeant Mark Maxey Davis will recall, “I just thought [the evacuation] was a routine fire drill or something like that.” (Marble and Milhiser 9/2004, pp. 69)

Dr. Veena Railan describes: “I was not very sure what was happening, what was going on at that time. Maybe this is a drill because of what happened in New York.” (Marble and Milhiser 9/2004, pp. 125)

US Air Force Surgeon General Paul Carlton Jr. is accompanying a team of medics from the DTHC to the center courtyard. (Goldberg et al. 2007, pp. 109) He will recall that a young sergeant with him is “under the impression that this crash was yet another exercise.” Carlton tells him, “I think this one’s for real, my friend.” (Murphy 2002, pp. 222)

Captain Liza Lindenberg later describes, “Not until we went out the door did I see these plumes of smoke and thought, this is definitely not a drill.” (Marble and Milhiser 9/2004, pp. 85)

Major Bridget Larew remains at the clinic to help an injured victim. Soon, she will recall, “our medical teams were starting to come back in the building, realizing that this was not a drill and that they needed to be here with us to get supplies and stuff.” (Marble and Milhiser 9/2004, pp. 83)
A factor that may have contributed to this confusion is that personnel from the DTHC have participated in at least two training exercises during the previous 12 months based around the scenario of a plane crashing into the Pentagon (see October 24-26, 2000 and May 2001). (Ryan 11/3/2000; US Department of Health and Human Services 7/2002, pp. B17

; Goldberg et al. 2007, pp. 107) In response to the attack, the clinic’s workers will be involved with the emergency response, performing triage and treatment at the Pentagon. (US Department of Health and Human Services 7/2002, pp. B1 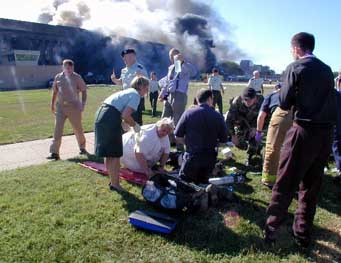 Medical workers at the first triage area set up outside the Pentagon after it is attacked. [Source: Mark D. Faram / US Navy]Soon after the Pentagon is hit, medical workers initiate their mass casualty plan (MASCAL) for dealing with disasters. Sergeant Matthew Rosenberg, a medic at the Pentagon’s DiLorenzo Tricare Health Clinic, arrives at the center courtyard. Seeing smoke rising from the side of the building and patients staggering out, he radios the clinic: “You need to initiate MASCAL right now! We have mass casualties! I need medical assets to the courtyard!” Major Lorie Brown, chief nurse of the DiLorenzo Clinic, says that as soon as she sees people running down the corridor to evacuate, “we initiated the MASCAL, started galvanizing all of our assets and put our plan in action.” (Maraniss 9/16/2001; Marble and Milhiser 9/2004, pp. 7, 39) The Pentagon has actually conducted at least three MASCAL training exercises in the previous 12 months, based around a plane crashing into the place (see October 24-26, 2000)(see May 2001)(see Early August 2001). Lieutenant Colonel John Felicio, the deputy commander for administration of the DiLorenzo Clinic, says, “The saving grace to our efforts was the two MASCAL exercises we previously had conducted.… Our scenario for both MASCALS was a plane flying into the Pentagon courtyard.” Furthermore, the nearby Walter Reed Army Medical Center (WRAMC), which sends ambulances in response to the attack, has recently recovered from a four-day power loss (see August 27-31, 2001). A military report will later state: “Many believe that [this] extended emergency… helped WRAMC in its response on September 11.” (Marble and Milhiser 9/2004, pp. 18, 146)