This page can be viewed at http://www.historycommons.org/entity.jsp?entity=matthew_alexander_1

Matthew Alexander was a participant or observer in the following events: 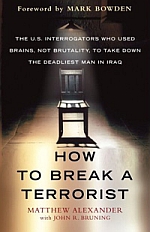 Cover of ‘How to Break a Terrorist.’ [Source: Military (.com)]Former Iraq interrogator “Matthew Alexander” (a pseudonym) publishes his book How to Break a Terrorist: The US Interrogators Who Used Brains, Not Brutality, to Take Down the Deadliest Man in Iraq. Alexander has just published an editorial in the Washington Post detailing his success in using non-coercive interrogation techniques to locate terrorist leader Abu Musab al-Zarqawi, and denouncing the use of torture by US interrogators in Iraq and Guantanamo (see November 30, 2008). Time’s Gilbert Cruz writes, “Structured around a series of interrogations, [Alexander’s book] details the battle of wills between ‘gators [Alexander’s term for interrogators] and suspects as well as the internal fight between Alexander’s team and the old-school military inquisitors used to more brutal methods of questioning.” In his book, Alexander writes that these “old-school” interrogation tactics not only failed to elicit useful information, they “led down the disastrous path to the Abu Ghraib scandal.” Cruz calls the book “a claustrophobic read,” bringing the reader into the interrogation rooms with him, his partner, and the detainee during marathon questioning sessions. However, “Alexander scarcely discusses the theories behind his interrogation strategy, its derivation, or whether the US military continues to use it.” He concludes, “[A] fuller epilogue could have broadened the story beyond this single set of circumstances.” (Cruz 12/2/2008)
'Times Where You Have to be Harsher' - In an interview about the book, Fox News host Sean Hannity attempts to assert that there will be times when torture is necessary to gain critical information. Alexander refuses to agree. Hannity says: “But I do think there’s going to be times where you have to be harsher. That’s an outsider’s view. Never? It never will work?” Alexander replies: “No.… I don’t say that torture doesn’t work; it does work on occasion. But what I say is that there’s better ways to do it.” (Fox News 12/3/2008)
'Extremely Ineffective and Counter-Productive' - In another interview the same evening, Alexander tells MSNBC’s Keith Olbermann that torture is “extremely ineffective and counter-productive to what we are trying to accomplish in both the short-term and the long-term.” He explains: “In the short-term, when you torture somebody, it hardens their resolve, the information that you get is unreliable. And if you do get reliable information, you’re able to stop a terrorist attack, al-Qaeda is then going to use the fact that we torture people to recruit new members, and then we’re going to have to deal with a whole new wave of terrorists.” In the MSNBC interview, Alexander calls for an outright ban on torture and the retraining of US interrogators in non-coercive methods of questioning. (MSNBC 12/4/2008)

Experts say that the so-called “ticking time bomb” scenario, which is often used to justify the use of torture, is fallacious. Many novels (see 1960), movies, and television shows, most recently Fox’s 24 (see Fall 2006), routinely portray a time-critical scene where the hero of the story must torture a prisoner to obtain information needed to avert an imminent attack, usually the “ticking time bomb” planted and ready to explode. Terrorism expert Bruce Hoffman says that such scenarios are dubious at best. “I’ve personally been told that they happen but I have to admit that in the years, in now the decade I have been told about it, I have become increasingly skeptical,” he says. “A ticking bomb becomes a default assumption which in turn becomes a legitimization or justification for torture. And in actual fact, even though people have told me about it, I have yet to see an actual documented case independently of what I was told.” Former CIA agent Michael Scheuer says that he knows of cases where torture elicited useful and critical information, but refuses to give specifics. CIA officials are unwilling or unable to provide details of the effectiveness of techniques such as waterboarding. Former military interrogator Matthew Alexander (see December 2-4, 2008) says of the CIA’s waterboarding of Khalid Shaikh Mohammed (see April 16, 2009 and April 18, 2009), “What I get most out of the waterboarding of Khalid Shaikh Mohammed is that any approach—I don’t care what it is—if you have to do it 183 times, it is not working,” he says. “When they did use the waterboard on Khalid Shaikh Mohammed, what they were getting each time was the absolute minimum he could get away with. And that’s what you get when you use torture—you get the absolute minimum amount of information.” (Temple-Raston 5/5/2009)