This page can be viewed at http://www.historycommons.org/entity.jsp?entity=maulana_fazlur_rehman_khalil_1

Maulana Fazlur Rehman Khalil was a participant or observer in the following events:

According to a confession made later to Indian police, Pakistani militant leader Maulana Masood Azhar travels to Somalia to help al-Qaeda operatives train local forces the US is attacking. Azhar is assisted by other radicals linked to Osama bin Laden (see Late 1992-October 1993). The training will culminate in the Black Hawk Down incident in October 1993 (see October 3-4, 1993).
Trip - Azhar initially travels to Nairobi, Kenya, on the orders of Maulana Fazlur Rehman Khalil, leader of the Pakistani militant organization Harkat ul-Ansar (later known as Harkat ul-Mujahedeen). In Nairobi, he meets with leaders of the Somali group Al-Ittihad al-Islamiya, and gives them money and equipment, as well as making three journeys to Somalia itself. Azhar will also say that some of the militants helping the anti-American Somalis are the same people who fought as the mujaheddin in the Soviet-Afghan War, but were expelled from Pakistan after the war.
Alleged Yemen Connection - Indian authorities will also say that Azhar helped with the movement of mercenaries from Yemen to Somalia, and that he was assisted in this by a Yemeni militant leader named Tariq Nasr al-Fadhli. Tariq is said to have fought in Afghanistan against the Soviets and to have been involved in an anti-US bombing in Yemen in late 1992 (see December 29, 1992). (Watson and Barua 2/25/2002) Azhar is also associated with Pakistan’s ISI. He will be imprisoned briefly in Pakistan after 9/11 and then released (see December 14, 2002).

A secret CIA report indicates the Pakistani ISI is giving “at least $30,000 - and possibly as much as $60,000 - per month” to the Harkat ul-Ansar, a Pakistani radical militant group that will be renamed Harkat ul-Mujahedeen (HUM) one year later. By this time, US intelligence is aware this group kidnapped and killed Americans and other Westerners in 1995 (see July 4, 1995). The CIA reports that Pakistan says it is reducing some of its monetary support to the group, presumably in an effort to avoid being placed on the US list of state sponsors of terrorism. But apparently this is just posturing, because in 2001 the State Department will report that the ISI is continuing to fund HUM (see April 30, 2001). The CIA also notes that HUM “might undertake terrorist actions against civilian airliners.” Saeed Sheikh, an alleged 9/11 paymaster, is a leader of the group (see April 1993), and in 1999 an airplane hijacking will free him and another HUM leader from prison (see December 24-31, 1999). (Central Intelligence Agency 8/1996

) Several months later, another secret US report will note the growing ties between HUM, Osama bin Laden, and the Taliban. But the US will not take any serious action against HUM or Pakistan. (US Embassy (Islamabad) 2/6/1997 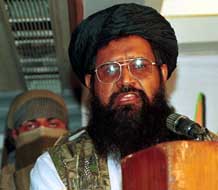 Maulana Fazlur Rehman Khalil. [Source: Public domain]The Los Angeles Times reports that Maulana Fazlur Rehman Khalil, leader of the Pakistani militant group Harkat ul-Mujahedeen (HUM), is living and operating openly in Pakistan. He lives with his family in the city of Rawalpindi and urges his followers to fight the US. Khalil was a signatory to Osama bin Laden’s February 1998 fatwa [religious edict] that encouraged attacks on Americans and Jews anywhere in the world (see February 22, 1998). In late 1998, Khalil said, “We will hit back at [the Americans] everywhere in the world, wherever we find them. We have started a holy war against the US and they will hardly find a tree to take shelter beneath it.” The Pakistani government banned HUM in January 2002 (see Shortly After January 12-March 2002), but the group simply changed its name to Jamiat ul-Ansar and continued to operate. Then it was banned again in November 2003 (see November 2003). The Times reports that HUM is openly defying the most recent ban. HUM publishes a monthly magazine that urges volunteers to fight the US in Afghanistan and Iraq. In a recent issue published since the most recent ban, Khalil calls on followers to “sacrifice our life, property and heart” in order to help create one Muslim nation that will control the whole world. The magazine continues to appear on newsstands in Pakistan and gives announcements for upcoming HUM meetings and events, despite the group supposedly being banned.
Government Takes No Action - The Pakistani government claims not to know where Khalil is, even though his magazine publishes his contact information (Times reporters attempting to find him for an interview were detained and roughed up by his supporters.) Government officials also claim that Khalil and HUM are doing nothing illegal, even though HUM’s magazine makes clear fund-raising appeals in each issue, and Pakistani law clearly specifies that banned groups are not allowed to fund-raise. Officials also say that they don’t know where the leaders of other banned militant groups like Jaish-e-Mohammed and Lashkar-e-Toiba are, but these leaders make frequent public appearances and documents obtain by the Times show the ISI intelligence agency is closely monitoring them. Militant leader Maulana Masood Azhar has not been arrested even though his group, Jaish-e-Mohammed, was recently implicated in the attempted assassination of Pakistani President Pervez Musharraf (see December 14 and 25, 2003). (Watson and Zaidi 1/25/2004)
Link to California Suspect - In 2005, a Pakistani immigrant to the US named Umer Hayat will be arrested in California on terrorism charges. He will allegedly confess to having toured training camps in Pakistan run by Khalil, who is a family friend. He will only serve a short time for making false statements to the FBI, but his son Hamid Hayat will be sentenced to 24 years in prison on similar charges (see June 3, 2005). (Tempest, Krikorian, and Romney 6/9/2005)

A cell phone could link Osama bin Laden to an Islamist militant group with ties to the ISI, Pakistan’s intelligence agency, the New York Times reports. The US military raid that killed bin Laden in his Abbottabad hideout on May 2, 2011 (see May 2, 2011) also killed a courier who had links to Harkat-ul-Mujahedeen, an Islamist militant group in Pakistan with links to the ISI. This suggests that the ISI may have been indirectly linked to bin Laden in his hideout.
Links to Harkat Could Lead to ISI - The cell phone of bin Laden’s trusted courier Ibrahim Saeed Ahmed (also known as Abu Ahmed al-Kuwaiti) was recovered by US forces during the raid. The New York Times reports that senior US officials say the cell phone contains contacts to Harkat-ul-Mujahedeen. This group has long been considered an asset of the ISI. Tracing the phone calls, US intelligence analysts determined Harkat leaders in communication with Ahmed had called ISI officials. One Harkat leader met an ISI official in person. No “smoking gun” showing the ISI protected bin Laden has been found so far. However, the Times says that this raises “tantalizing questions about whether the group and others like it helped shelter and support bin Laden on behalf of Pakistan’s spy agency, given that it had mentored Harkat and allowed it to operate in Pakistan for at least 20 years.”
Harkat Has Strong Local Presence - Harkat is said to have a strong presence in the area around Abbottabad. The group has training camps and other facilities in Mansehra, only a few miles away. Bin Laden’s courier Ahmed appears to have stopped by a camp in Mansehra belonging to a Harkat splinter group, Jaish-e-Mohammed. Members of Harkat are able to move freely within Pakistan. Even now, the group’s top leader, Maulana Fazlur Rehman Khalil, lives openly in the Pakistani capital of Islamabad, about 30 miles away from Abbottabad. Analysts suspect this support network could explain why bin Laden chose to hide where he did. Harkat also has a presence in Pakistan’s tribal region where many al-Qaeda operatives are believed to live, so bin Laden could have used it to send money and messages back and forth to the tribal region.
Harkat 'Very, Very Close to the ISI' - Former CIA officer Bruce Riedel says that Harkat “is one of the oldest and closest allies of al-Qaeda, and they are very, very close to the ISI. The question of ISI and Pakistani Army complicity in bin Laden’s hide-out now hangs like a dark cloud over the entire relationship” between Pakistan and the US. (Gall, Shah, and Schmitt 6/23/2011)