This page can be viewed at http://www.historycommons.org/entity.jsp?entity=maureen_dooley_1

Maureen Dooley was a participant or observer in the following events:

At NORAD’s Northeast Air Defense Sector (NEADS), the technical sergeant who has been notified of the suspected hijacking of Flight 11 passes on this news to colleagues of his on the NEADS operations floor. (Spencer 2008, pp. 25) The FAA’s Boston Center has just called NEADS to report “a hijacked aircraft headed towards New York,” and has requested that fighter jets be launched in response (see (8:37 a.m.) September 11, 2001). (9/11 Commission 7/24/2004, pp. 20) Tech. Sgt. Jeremy Powell, who answers this call, reportedly “bolts up and turns toward the ID section behind him on the ops floor.” He says, “We’ve got a hijack going on!” Master Sergeant Maureen Dooley, the leader of the ID section, mistakenly thinks this is part of the day’s training exercise (see (6:30 a.m.) September 11, 2001) and tells the other members of her team: “We have a hijack going on. Get your checklists. The exercise is on.” But Powell then clarifies: “No, you don’t understand. We have a no-shit hijack!” Sitting next to Dooley is Master Sergeant Joe McCain, the NEADS mission crew commander technician, who gets on the paging system and calls for the mission crew commander (MCC), Major Kevin Nasypany, to come to the operations floor immediately. Nasypany is in charge of the operations floor and needs to know if anything important is happening. He arrives moments later and learns of the hijacking. (Bronner 8/1/2006; Spencer 2008, pp. 25-26 and 40)

Major Kevin Nasypany. [Source: CBC]When the FAA’s Boston Center first contacts NORAD’s Northeast Air Defense Sector (NEADS) to notify it of the hijacking of Flight 11 (see (8:37 a.m.) September 11, 2001), personnel there initially mistake the hijacking for a simulation as part of an exercise.

Lieutenant Colonel Dawne Deskins, mission crew chief for the Vigilant Guardian exercise currently taking place (see (6:30 a.m.) September 11, 2001), will later say that initially she and everybody else at NEADS think the call from Boston Center is part of Vigilant Guardian. (Seely 1/25/2002) Although most of the personnel on the NEADS operations floor have no idea what the day’s exercise is supposed to entail, most previous major NORAD exercises included a hijack scenario. (Komarow and Squitieri 4/18/2004; Cooper 8/5/2004) The day’s exercise is in fact scheduled to include a simulated hijacking later on. (Bronner 8/1/2006)

Major Kevin Nasypany, the NEADS mission crew commander, had helped design the day’s exercise. Thinking the reported hijacking is part of it, he actually says out loud, “The hijack’s not supposed to be for another hour.” (Bronner 8/1/2006)

In the ID section, at the back right corner of the NEADS operations floor, technicians Stacia Rountree, Shelley Watson, and Maureen Dooley react to the news. Dooley, the leader of the ID section, tells the other members of her team: “We have a hijack going on. Get your checklists. The exercise is on” (see (8:38 a.m.) September 11, 2001). Rountree asks, “Is that real-world?” Dooley confirms, “Real-world hijack.” Watson says, “Cool!” (Bronner 8/1/2006; Spencer 2008, pp. 25)

When NEADS Commander Robert Marr sees his personnel reacting to the news of the hijacking (see (8:38 a.m.) September 11, 2001), he reportedly thinks the day’s exercise “is kicking off with a lively, unexpected twist.” Even when a colleague informs him, “It’s a hijacking, and this is real life, not part of the exercise,” Marr thinks: “This is an interesting start to the exercise. This ‘real-world’ mixed in with today’s simex [simulated exercise] will keep [my staff members] on their toes.” (Spencer 2008, pp. 26)

Major General Larry Arnold, who is at Tyndall Air Force Base, Florida, also later says that when he first hears of the hijacking, in the minutes after NEADS is alerted to it, “The first thing that went through my mind was, is this part of the exercise? Is this some kind of a screw-up?” (ABC News 9/11/2002; 9/11 Commission 5/23/2003) According to author Lynn Spencer: “Even as NORAD’s commander for the continental United States, Arnold is not privy to everything concerning the exercise. The simex is meant to test commanders also, to make sure that their war machine is operating as it should.” (Spencer 2008, pp. 38)

One of the ID technicians at NORAD’s Northeast Air Defense Sector (NEADS) calls the FAA’s Boston Center, and learns that there have been “threats in the cockpit” of Flight 11. The communications team at NEADS is currently trying to quickly find out all they can about the hijacked plane, such as its flight number, tail number, and where it is. ID tech Shelley Watson calls the management desk at the Boston Center, which had alerted NEADS to the hijacking minutes earlier (see (8:37 a.m.) September 11, 2001), wanting to make sure she has all the information that is available on Flight 11. Her call is answered by Boston Center’s military liaison, Colin Scoggins. Scoggins tells Watson: “He’s being hijacked. The pilot’s having a hard time talking to the… I mean, we don’t know. We don’t know where he’s goin’. He’s heading towards Kennedy [International Airport in New York City]. He’s… 35 miles north of Kennedy now at 367 knots. We have no idea where he’s goin’ or what his intentions are.” Scoggins says, “I guess there’s been some threats in the cockpit,” and adds, “We’ll call you right back as soon as we know more info.” Master Sergeant Maureen Dooley is standing over Watson, relaying any pertinent information she hears to Major Kevin Nasypany. She calls to him, “Okay, he said threat to the cockpit!” (Bronner 8/1/2006; Spencer 2008, pp. 34)

Technicians on the operations floor at NORAD’s Northeast Air Defense Sector (NEADS) receive what is apparently their first notification that a plane has hit the World Trade Center, in a phone call from the FAA’s Boston Center. (Bronner 8/1/2006) NEADS ID technicians are currently trying to locate Flight 11, when they are called by Colin Scoggins, the military liaison at the Boston Center. ID tech Stacia Rountree answers the call. In response to Scoggins’s information, Rountree says to her colleagues, “A plane just hit the World Trade Center.” She asks Scoggins, “Was it American 11?” He tells her this is not confirmed. (Spencer 2008, pp. 50) Another of the ID techs, Shelley Watson, starts murmuring in response to the news: “Oh my God. Oh God. Oh my God.” (Bronner 8/1/2006) A computer maintenance technician then runs onto the operations floor and announces that CNN is broadcasting that a 737 has hit the WTC. (Spencer 2008, pp. 51)
NEADS Calls New York Center - Master Sergeant Maureen Dooley, the leader of the ID techs, tells Watson: “Update New York! See if they lost altitude on that plane altogether.” Watson immediately calls the FAA’s New York Center and asks, “Did you just hear the information regarding the World Trade Center?” When the person who answers her call says no, Watson explains, “Being hit by an aircraft.” The person at New York Center says, “You’re kidding,” but Watson adds, “It’s on the world news.” (Bronner 8/1/2006) One of the NEADS technicians is finally able to display the live CNN coverage on one of the 15-foot screens at the front of the room. People stare in silence at the footage of the burning North Tower. (Spencer 2008, pp. 51) 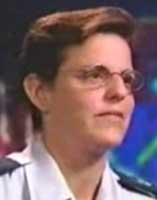 Master Sergeant Maureen Dooley. [Source: ABC News]Rumors have started circulating through the civilian air traffic system that the plane that hit the World Trade Center was a small Cessna. There is increasing confusion on the operations floor at NORAD’s Northeast Air Defense Sector (NEADS) as to whether it was really Flight 11. ID tech Stacia Rountree is on the phone with Colin Scoggins, a civilian manager who is the military liaison at the FAA’s Boston Center. Scoggins initially seems to confirm that the plane was Flight 11, saying: “Yeah, he crashed into the World Trade Center.… [D]isregard the tail number [given earlier for American 11].” When Rountree asks, “He did crash into the World Trade Center?” Scoggins replies, “[T]hat’s what we believe, yes.” However, an unidentified male staff member at NEADS overhears, and queries: “I never heard them say American Airlines Flight 11 hit the World Trade Center. I heard it was a civilian aircraft.” Master Sergeant Maureen Dooley takes the phone from Rountree and asks Scoggins, “[A]re you giving confirmation that American 11 was the one?” Apparently contradicting what he’d previously said, Scoggins replies: “No, we’re not gonna confirm that at this time. We just know an aircraft crashed in.… The last [radar sighting] we have was about 15 miles east of JFK [International Airport in New York City], or eight miles east of JFK was our last primary hit. He did slow down in speed… and then we lost ‘em.” (Bronner 8/1/2006) This confusion will continue later on, when NEADS will be misinformed that Flight 11 is still airborne (see 9:21 a.m. September 11, 2001). 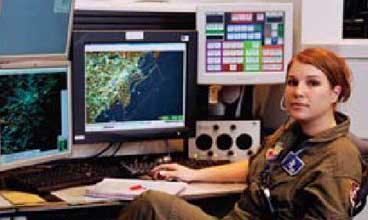 Stacia Rountree. [Source: Vanity Fair]Colin Scoggins, the military liaison at the FAA’s Boston Center, contacts NORAD’s Northeast Air Defense Sector (NEADS) and incorrectly notifies it that another aircraft, Delta Air Lines Flight 1989, is a possible hijacking. (9/11 Commission 2004; Bronner 8/1/2006) Boston Center previously called NEADS at 9:27 and said that Delta 1989 was missing (see 9:27 a.m. September 11, 2001). (North American Aerospace Defense Command 9/11/2001; 9/11 Commission 5/23/2003)
NEADS Technicians Respond - At NEADS, Stacia Rountree, the ID technician who takes Scoggins’s call, announces to her colleagues: “Delta ‘89, that’s the hijack. They think it’s possible hijack.… South of Cleveland.” The plane’s transponder is still on, and she adds, “We have a code on him now.” Rountree’s team leader, Master Sergeant Maureen Dooley, instructs: “Pick it up! Find it!” The NEADS technicians quickly locate Delta 1989 on their radar screens, just south of Toledo, Ohio, and start alerting other FAA centers to it. (Bronner 8/1/2006; Spencer 2008, pp. 177) NEADS mission crew commander Major Kevin Nasypany will be notified by his staff of the suspected hijacking at about 9:41 or 9:42 a.m. (9/11 Commission 1/22/2004