This page can be viewed at http://www.historycommons.org/entity.jsp?entity=medstar_health_1

MedStar Health was a participant or observer in the following events: 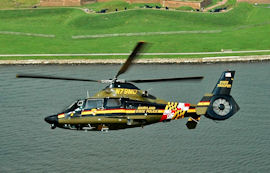 ) The Maryland State Police Aviation Command owns 12 helicopters and most of its work involves medical transport, with its helicopters carrying injured patients to hospital. (Maryland State Police 2/16/2003; Desmon 3/7/2006) According to Galey, the unit has “the most resources for aircraft, medevac aircraft, that we knew were manned and ready to go.” However, Galey will later recall, in response to his request, “they came back and said, ‘No, we can’t respond.’”
Maryland Police Think They Cannot Launch Helicopters - When Galey is told that the unit cannot respond, he and the rest of his crew are “very shocked,” and, Galey will say, “[T]hat’s when we were starting to suspect there was something more to it.” According to later accounts, the unit cannot respond because the airspace has been shut down. (Forror 11/2001; Galey 11/20/2001) (The FAA has issued a nationwide “ground stop” that prevents any aircraft from taking off (see (9:26 a.m.) September 11, 2001) and has also ordered that all airborne aircraft must land at the nearest airport (see (9:45 a.m.) September 11, 2001). (US Congress. House. Committee On Transportation And Infrastructure 9/21/2001; 9/11 Commission 7/24/2004, pp. 25, 29) Galey is currently unaware that the airspace has been shut down. However, the Maryland State Police helicopters should be able to respond all the same, because NORAD has told him, “The aircraft that you’re calling in, we’re going to allow to come in” (see (Shortly After 9:55 a.m.) September 11, 2001). According to Galey, the Maryland State Police “just didn’t know [that] if we requested them they could come.”
Other Departments Send Helicopters - Galey then contacts MedStar at the Washington Hospital Center and AirCare at Inova Fairfax Hospital in Virginia. Each of them dispatches helicopters to the Pentagon. Galey will recall that these two departments “hadn’t gotten the word that the airspace was shut down, and since I’m the one who requested the aircraft and informed NORAD, NORAD allowed them to come in.” (Forror 11/2001; Galey 11/20/2001) It is unclear exactly when Galey contacts the different departments. But according to the Arlington County After-Action Report, the helicopter that MedStar launches arrives at the Pentagon at around 10:18 a.m. Inova Fairfax Hospital launches one helicopter at “approximately 10:00 a.m.” and then sends a second helicopter to the Pentagon at around 10:40 a.m. (US Department of Health and Human Services 7/2002, pp. A-45