This page can be viewed at http://www.historycommons.org/entity.jsp?entity=metropolitan_washington_airports_authority_1

Metropolitan Washington Airports Authority (MWAA) was a participant or observer in the following events:

Shortly before the Pentagon is attacked, firefighters with the Metropolitan Washington Airports Authority (MWAA) respond to a multiple vehicle car crash at the upper level of Terminal B of Reagan National Airport, which is less than a mile from the Pentagon. Captain Michael Defina, the acting shift commander, has seen the World Trade Center attacks on television and, although the airport is not on alert, he later claims he has a feeling that Washington could be another terrorist target. Although the shift commander doesn’t usually respond to motor vehicle accidents, Defina accompanies the rescue engine and medic unit to the crash at Terminal B because, he says, “something didn’t sound right about it.” He then hears a “dull roar” when the Pentagon is struck, and turns to see smoke rising above it. (Murphy 11/1/2001; Ward 4/2002

) Fire Communications initially tells him that a Boeing 757 crashed off the end of Runway 1-19 at Reagan Airport. This report is soon corrected, and the MWAA is directed to respond to the Pentagon attack. It has substantial resources for this, including two foam units and two mass casualty units. MWAA has authority to automatically respond to plane crashes within 5 miles of Reagan Airport, so two of its heavy rescue units self-dispatch to the Pentagon. Its fire and medical units arrive at the crash site within 5 minutes of the attack. (US Department of Health and Human Services 7/2002, pp. A6-A7

) The Airports Authority firefighters are able to set up directly in front of the impact hole, and their foam units knock down much of the fire within seven minutes of arriving. (Murphy 11/1/2001) 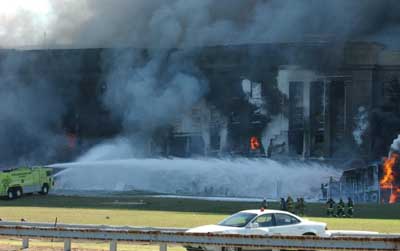 Initial firefighting efforts after the attack on the Pentagon. [Source: US Department of Defense] (click image to enlarge)Numerous area firefighters and other emergency workers promptly learn of the Pentagon crash and are able to arrive at the crash scene within 5 or 6 minutes of the attack. These responders include members of the Arlington County Fire Department (ACFD) and the Fort Myer Fire Department, plus units belonging to the Fire and Rescue Department of the Metropolitan Washington Airports Authority (MWAA). (Goldberg et al. 2007, pp. 66) ACFD’s training officer, Captain Chuck Gibbs, reaches the crash site within 3 minutes of the attack, followed a minute later by Battalion Chief Bob Cornwell, who assumes initial incident command responsibilities. ACFD Captain Edward Blunt arrives at 9:42 and establishes Emergency Medical Services control. ACFD Truck 105 is the first unit to arrive, reaching the scene at 9:41. (US Department of Health and Human Services 7/2002, pp. A5-A6 and 1-1

) A minute after it, Rescue Engines 161 and 162 of the Fort Myer Fire Department arrive, followed by a reserve pumper, Engine 163. (Goldberg et al. 2007, pp. 68) MWAA fire and medical units, and the first contingent of the FBI’s National Capital Response Squad, also arrive within 5 minutes of the crash. By 10:00 a.m., most of the ACFD duty shift will be engaged at the Pentagon. (US Department of Health and Human Services 7/2002, pp. A7

) Federal, state, and local civilian police officers also arrive within minutes of the attack. (Goldberg et al. 2007, pp. 161) Most Arlington County Police Department officers will have reached the scene within 3 hours. (US Department of Health and Human Services 7/2002, pp. C6

) Several factors have contributed to the prompt emergency response:

The Arlington County Emergency Communications Center (ECC), which is the focal point of all police and fire 911 calls for the county, received several calls from emergency workers who saw the low-flying plane approaching the Pentagon (see (9:36 a.m.-9:39 a.m.) September 11, 2001). (Goldberg et al. 2007, pp. 66)

Some fire and rescue units responded after hearing the radio message of Fire Captain Steve McCoy, reporting the crash. (US Department of Health and Human Services 7/2002, pp. A4

Numerous emergency units were already on the road near the Pentagon, and were able to quickly respond, after being called out to an apartment fire that was found to have already gone out (see (Shortly Before 9:37 a.m.) September 11, 2001). (Eversburg 11/2002)