This page can be viewed at http://www.historycommons.org/entity.jsp?entity=mitzi_torri_1

Mitzi Torri was a participant or observer in the following events: 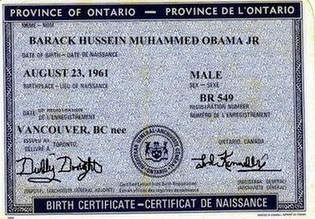 The fake Canadian birth certificate lawyer Philip Berg submitted to ‘prove’ his contention that President Obama is not an American citizen. [Source: Obama Conspiracy Theories (.org)]Attorney Philip J. Berg files a lawsuit alleging that Senator Barack Obama (D-IL) is not an American citizen and is therefore ineligible to hold the office of president (see June 13, 2008, June 27, 2008, July 2008, and August 21, 2008). Berg’s lawsuit is dismissed three days later by Federal Judge R. Barclay Surrick on the grounds that Berg lacks the standing to bring the lawsuit. Berg names Obama as a defendant in the lawsuit under his given name of Barack Hussein Obama and under three alleged “pseudonyms,” “Barry Soetoro,” “Barry Obama,” and “Barack Dunham.” Berg alleges that Obama “cheated his way into a fraudulent candidacy and cheated legitimately eligible natural-born citizens from competing in a fair process.” Surrick rules that ordinary citizens cannot sue to ensure that a presidential candidate actually meets the constitutional requirements of the office. Instead, Surrick writes, Congress could determine “that citizens, voters, or party members should police the Constitution’s eligibility requirements for the presidency,” but it would take new laws to grant individual citizens that ability. “Until that time, voters do not have standing to bring the sort of challenge that Plaintiff attempts to bring.” Surrick cites Article III of the Constitution in ruling that Berg has no standing to bring his lawsuit. He also criticizes Berg’s premise, noting that it is unlikely in the extreme that Obama could have gone so long without being discovered as a foreign-born alien. “Plaintiff would have us derail the democratic process by invalidating a candidate for whom millions of people voted,” Surrick rules, “and who underwent excessive vetting during what was one of the most hotly contested presidential primary [sic] in living memory.” Surrick cites a similar case, Hollander v. McCain, which failed to find that presidential contender John McCain (R-AZ) is not an American citizen. McCain was born in the Panama Canal Zone to American parents serving in the military, and thusly is a US citizen (see March 14 - July 24, 2008). After the dismissal, Berg tells a conservative blogger: “This is a question of who has standing to stand up for our Constitution. If I don’t have standing, if you don’t have standing, if your neighbor doesn’t have standing to ask whether or not the likely next president of the United States—the most powerful man in the entire world—is eligible to be in that office in the first place, then who does?” Berg says he will appeal the decision. (Berg v. Obama et al 8/21/2008; US District Court for the Eastern District of Pennsylvania 8/24/2008

; Zahn 10/25/2008; Amerman 1/16/2009)
McCain Lawyer Calls Lawsuit 'Idiotic' - A lawyer for the McCain-Palin campaign, reading over the filing before Surrick issues his ruling, assesses it as “idiotic” and determines that it will certainly be dismissed. The McCain-Palin campaign will begin investigating the claims of Obama’s “non-citizenship,” and determine them to be groundless (see July 29, 2009). (Weigel 7/24/2009)
Injunction to Supreme Court Requested - Berg will also file an injunction asking the Supreme Court to block Obama’s ascendancy to the presidency. “I am hopeful that the US Supreme Court will grant the injunction pending a review of this case to avoid a constitutional crisis by insisting that Obama produce certified documentation that he is or is not a ‘natural born’ citizen and if he cannot produce documentation, that Obama be removed from the ballot for president,” Berg writes in a press release. (Smith 10/31/2008)
Appeal Built on Fraudulent Evidence - In his appeal, Berg will introduce a fraudulently edited audiotape purporting to provide evidence that Obama was born in a Kenyan hospital (see October 16, 2008 and After); Berg will write in a filing: “Obama’s grandmother on his father’s side, half brother, and half sister claim Obama was born in Kenya. Reports reflect Obama’s mother went to Kenya during her pregnancy.… Stanley Ann Dunham (Obama) gave birth to Obama in Kenya, after which she flew to Hawaii and registered Obama’s birth.” (Greg Doudna 12/9/2008

) Berg will also include incorrect and falsified citations of American and international law drawn from such sources as “Wikipedia Italian version” and “Rainbow Edition News Letter.” He alleges, without real proof, that Obama had lied or been unclear about what hospital he was born in, and that he had been adopted by his stepfather Lolo Soetoro. Berg’s “proof” of the Soetoro “adoption” comes from an incorrect record made by an Indonesian grade school which listed Obama’s name as “Barry Soetoro” and listed his nationality as “Indonesian.” Berg writes that obviously Obama had “renounced” his American citizenship, and, thusly, there is “absolutely no way Obama could have ever regained ‘natural born’ status.” Immigration lawyer Mitzi Torri later calls Berg’s assertion “completely wrong,” citing the 1952 Immigration and Nationality Act, which would have precluded a child of Obama’s age from renouncing his citizenship even had he wanted to do so. Torri will note, “Berg wants to say that this document from a school in Indonesia, which has no signature, which has no standing whatsoever, is more important than Obama’s birth certificate or our immigration law.” Berg will also make the false claim that because Obama went to Pakistan in 1981 when, he will claim, the US had a travel ban in effect, Obama could not have done so on an American passport and therefore must have used a passport drawn on his “foreign” citizenship. The claim is fraudulent; no such travel ban existed in 1981 (see Around June 28, 2010). Berg will later say of the Pakistan claim, “We got that from someplace.” (BERG v. OBAMA et al (second filing) 9/29/2008; Weigel 7/24/2009) Berg’s lawsuit was not helped by his submission of an obviously fraudulent Canadian birth certificate that purported to prove Obama was born in Vancouver, Canada. The certificate lists Obama as “Barack Hussein Mohammed Obama Jr.,” and the registrar is listed as “Dudley DoRight,” a famous Canadian cartoon character. (Obama Conspiracy (.org) 8/2/2009)
Appeal Rejected - The Supreme Court will refuse to hear the appeal. Justice Department spokesman Charles Miller will say Berg’s lawsuit is “dead in the water,” but Berg will promise, “We’re not going to give up on this.” (Amerman 1/16/2009)