This page can be viewed at http://www.historycommons.org/entity.jsp?entity=mohammed_abbas_1

Mohammed Abbas was a participant or observer in the following events: 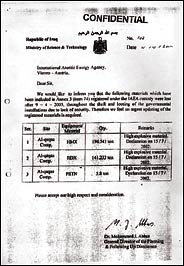 The letter sent by an Iraqi official to IAEA inspectors reporting hundreds of tons of missing explosives. [Source: New York Times]Dr. Mohammed Abbas of the Iraqi Ministry of Science and Technology writes a letter to the International Atomic Energy Agency warning that the huge explosives cache at Al Qaqaa (see May 2003) has been cleaned out. The IAEA had warned US officials of the likelihood of such an event months before, as well as before the March 2003 invasion (see May 2004). Abbas says that “urgent updating of the registered materials is required.” According to Abbas, the facility is missing around 377 tons of HMX, RDX, and PETN explosives, some of the most powerful explosives ever created. HMX stands for “high melting point explosive,” RDX for “rapid detonation explosive,” and PETN for “pentaerythritol tetranitrate.” The IAEA will forward the letter to the US. IAEA head Mohamed ElBaradei is “extremely concerned” about the “potentially devastating consequences” of the missing explosives, according to a European diplomat. Dr. Van Romero of the New Mexico Institute of Mining and Technology says: “HMX and RDX have a lot of shattering power.… Getting a large amount is difficult” because most nations carefully regulate who can buy such explosives. An expert who recently led a team that searched Iraq for deadly arms says that the “immediate danger” of the looted explosives “is its potential use with insurgents in very small and powerful explosive devices. The other danger is that it can easily move into the terrorist web across the Middle East.” (Glanz, Broad, and Sanger 10/25/2004)