This page can be viewed at http://www.historycommons.org/entity.jsp?entity=mohammed_quayyum_khan_1

Mohammed Quayyum Khan was a participant or observer in the following events: 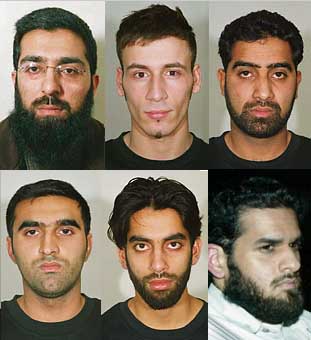 Six alleged members of the fertilizer bomb plot: Salahuddin Amin, Anthony Garcia, Waheed Mahmood, Momin Khawaja, Jawad Akbar, and Omar Khyam. [Source: Metropolitan Police/ CP Jonathan Hayward]In early 2003, the British intelligence agency MI5 is tracking a suspected al-Qaeda leader living in Britain known as Mohammed Quayyum Khan (a.k.a. “Q”) (see March 2003 and After), and they see him repeatedly meeting with a Pakistani-Briton named Omar Khyam. Quayyum is believed to be an aide to al-Qaeda leader Abd al-Hadi al-Iraqi. (BBC 5/1/2007) By around March or April 2003, investigators begin monitoring Khyam, and soon discover he is a ringleader in a fertilizer bomb plot on unknown targets in Britain. (Taylor 4/30/2007)
Surveillance Intensifies - By the beginning of February 2004, surveillance intensifies. Thousands of hours of audio are recorded on dozens of suspects. The investigation soon focuses on a smaller group of Khyam’s close associates who are originally from Pakistan and had attended training camps in mountainous regions of Pakistan in recent years. Most of these men have links to Al-Muhajiroun, a banned Islamist group formed by radical London imam Omar Bakri Mohammed. The plotters are monitored discussing various targets, including nightclubs, pubs, and a network of underground high-pressure gas pipelines. In February 2004, MI5 intercepts a phone conversation between Khyam talking to his associate Salahuddin Amin, in Pakistan, about the quantities of different ingredients needed to construct a fertilizer bomb. An al-Qaeda operative in Pakistan had encouraged Amin to bomb targets in Britain.
Fertilizer Found and Replaced - Later in February, employees at a self storage depot in London call police after discovering a large amount of ammonium nitrate fertilizer being stored and suspecting it might be used for a bomb. Investigators discover the fertilizer belongs to Khyam and his group, and has been stored there since November 2003. The fertilizer is covertly replaced with an inert substance so a bomb cannot be successfully made from it.
Arrests Made - Investigators discover that Khyam is planning to fly to Pakistan on April 6, and the decision is made to arrest the suspects before he leaves the country. On March 29, a bomb plotter named Momin Khawaja is arrested where he is living in Canada. Weapons and a half-built detonator are found in his house. The next day, Khyam and seventeen others are arrested in England (see March 29, 2004 and After). Aluminum powder, a key bomb ingredient, is found in a shed owned by Khyam. Amin, still living in Pakistan, turns himself in to authorities there a few days later. Another key member of the group, Mohammed Junaid Babar, is not arrested and flies to the US on April 6. But he is arrested there four days later and quickly agrees to reveal all he knows and testify against the others (see April 10, 2004).
Five Convicted in Trial - The suspects will be put on trial in 2006 and Babar will be the star prosecution witness. Five people, including Khyam, will be sentenced to life in prison in 2007. Trials against Khawaja in Canada and Amin in Pakistan have yet to be decided. Curiously, Quayyum, who has been alleged to the mastermind of the plot and the key al-Qaeda link, is never arrested or even questioned, and continues to live openly in Britain (see March 2003 and After). (Cobain and Norton-Taylor 5/1/2007)

March 2003 and After: Alleged Leader of Al-Qaeda Bomb Plot Is Monitored in Britain but Mysteriously Never Arrested or Even Questioned 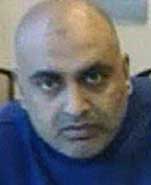 Mohammed Quayyum Khan. [Source: BBC]In March 2003, the British intelligence agency MI5 begins monitoring Mohammed Quayyum Khan (a.k.a. “Q”), a part-time taxi driver living in Luton, England, and born in Pakistan. He is said to be an associate of the radical London imams Omar Bakri Mohammed and Abu Hamza al-Masri. It is not known how MI5 first gains an interest in Quayyum, but apparently during a trip to Pakistan in 2003, Pakistan’s intelligence agency, the ISI, tracks him overtly to warn him that they are aware of his activities. During a later court trial, an al-Qaeda operative turned informant named Mohammed Junaid Babar will allege that Quayyum:

Takes his orders from al-Qaeda leader Abd al-Hadi al-Iraqi. He is said to be one of about three or four operatives working directly under this leader.

Arranges for Mohammad Sidique Khan, the head suicide bomber in the 7/7 London bombings, to travel to Pakistan and attend militant training camp in 2003.

Provides funds and equipment for militants fighting US troops in Afghanistan.

Is the leader of the 2004 British fertilizer bomb plot. Five of Quayyum’s associates will be sentenced to life in prison for roles in this plot.
In early February 2004, MI5 first discovers the existence of the fertilizer bomb plot while it monitors the various plotters meeting with Quayyum (see Early 2003-April 6, 2004). For instance, Omar Khyam, one of those who will later be sentenced to life in prison, is secretly videotaped meeting with Quayyum. Khyam will later admit that just before he left for militant training in Pakistan, Quayyum gave him money and said: “It’s better for both of us if we don’t meet each other. Because the security services may be monitoring me.” Yet when all the other members of the plot are arrested in late March 2004, Quayyum stays free. The Guardian will later report, “Despite the number of serious allegations leveled against him [in court], police and MI5 say they have never found sufficient evidence to arrest or charge him.” Quayyum is never questioned about his links to the fertilizer bomb plotters. After the 7/7 suicide bombings in 2005, he is not questioned about his verified links with the suicide bombers either (such as the monitored calls between him and the head suicide bomber (see Shortly Before July 2003)). He continues to live in Luton and is seen by a Guardian journalist working as a chef in a small cafe there. “He is thought to have since disappeared.” (Cobain and Vasagar 5/1/2007; Cobain and Norton-Taylor 5/1/2007) Author Loretta Napoleoni will later comment that the lack of action against Quayyum is especially strange given the British government’s power to detain suspects for years without charge. She will say, “The press has proffered the hypothesis—neither confirmed nor denied by the special services—that Quayyum was a ‘Deep Throat’” mole or informant. (Napoleoni 5/8/2007)

Omar Khyam in Pakistan in 2003. [Source: Public domain]In early 2003, the British domestic intelligence agency MI5 begins investigating a man named Mohammed Quayyum Khan (a.k.a. “Q”), who is a taxi driver living in Luton, England. MI5 believes he is an important al-Qaeda operative. Mohammad Sidique Khan is the head suicide bomber in the 7/7 London bombings, and at some point before he goes to a training camp in Pakistan in July 2003 (see July-September 2003), MI5 traces his cell phone number from a phone call or calls between him and Quayyum. It will later be revealed in court that Quayyum arranged for Sidique Khan to attend the training camp, so it seems probable the monitored communication relates to these arrangements. MI5 discovers the prepaid phone belongs to a “Siddique Khan,” but they find no reference to him in their own records or on the Police National Computer, so they do not pursue the lead any further. In early 2004, MI5 will repeatedly monitor Khan meeting with Omar Khyam (see February 2-March 23, 2004), the head bomber in a plot to bomb a target in Britain with a large fertilizer bomb (see Early 2003-April 6, 2004). They allegedly do not know Khan’s name, but they learn in June 2004 that the car he has been driving Khyam around in is registered to the name “Siddeque Khan.” But, as the London Times will later note, “For reasons that remain unexplained, no one at MI5 made the connection to the Siddique Khan whose mobile phone number had already cropped up.” Strangely, despite his links such as this to both the fertilizer bomb plot and the 7/7 bombers, Quayyum will never be arrested or even questioned by officials, and continues to live openly in Britain (see March 2003 and After). (McGrory et al. 5/1/2007; BBC 5/25/2007) 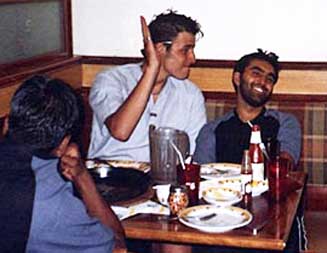 Anthony Garcia (left) and Omar Khyam (right) facing the camera, in Pakistan in 2003. Both will be sentenced to life in prison for the fertilizer bomb plot. [Source: Corbis]In the summer of 2003, a group of young Pakistani-Briton men rent a room in a hostel in Lahore, Pakistan. The group is very noisy at night, talking and playing music, which draws complaints from neighbors. One neighbor will later tell the Times of London that it was obvious they were violent militants: “We knew what they were doing and we were afraid at those boys being here, but we couldn’t do anything about it.” The neighbors finally call the police after hearing a series of late night explosions coming from their room. The group tells police that a propane gas cylinder had exploded. But the police do not believe it and begin a surveillance operation.
Investigation - Investigators learn the group recently traveled to Malakand, a very mountainous region of Pakistan near the border with Afghanistan. It is known that al-Qaeda maintains training camps there. Members of the group are also seen making regular visits to an office complex in Lahore where Al-Muhajiroun and other militant groups rent space. Most of the group members are linked to Al-Muhajiroun back in Britain. One member of the group is Omar Khyam, who is a key figure in a fertilizer bomb plot in Britain that will be foiled by British intelligence in March 2004 (see Early 2003-April 6, 2004). Another member is Mohammad Sidique Khan, the head suicide bomber in the 7/7 London bombings (see July 7, 2005). Yet another member is Mohammed Junaid Babar, an al-Qaeda operative living in Britain who is important enough to attend a key al-Qaeda summit in 2004 (see March 2004).
Return Home - Khan returns to Britain in August 2003 and Khyam returns one month later (Khyam is already under surveillance in Britain). It is unknown when Babar returns exactly, but in early April 2004 he flies from Britain to the US, is arrested, and begins telling all he knows about his associates in return for a reduced sentence (see April 10, 2004). He only knows Khyam by his alias “Ausman” and Khan by his alias “Ibrahim,” and it is unknown just how much he reveals about their training together in Pakistan.
Warnings - But the Pakistani ISI will later claim that they twice gave warnings to British intelligence about the monitored group in Lahore. Apparently the ISI decided the group was not a threat in Pakistan but was planning a bombing in Britain. A high-ranking ISI official will later claim: “There is no question that 7/7 could have and should have been stopped. British agencies did not follow some of the information we gave to them.” (McGrory et al. 5/1/2007)
Surveillance - If the ISI does not in fact warn British intelligence, then it is likely the British have at least some awareness of this group in Lahore attending training camps through another source. British intelligence has been closely monitoring Mohammed Quayyum Khan, who is believed to be a key al-Qaeda operative living in Britain and sending funds and militant recruits to Pakistan (see March 2003 and After). Quayyum remains in phone contact with Khayam in Pakistan. He also is monitored as he talks on the phone with Salahuddin Amin, a member of the fertilizer bomb plot who lives in Pakistan. (BBC 5/25/2007)