This page can be viewed at http://www.historycommons.org/entity.jsp?entity=national_preparedness_directorate_1

National Preparedness Directorate (NPD) was a participant or observer in the following events:

The National Preparedness Directorate within the Federal Emergency Management Agency (FEMA), which is responsible for overseeing parts the highly classified Continuity of Government (COG) program, develops and maintains a high-tech fleet of mobile command centers, known as Mobile Emergency Response Support (MERS) units. The MERS vehicles, crafted out of 18-wheel tractor-trailer trucks, are meant to provide federal leaders with the ability to not only escape a nuclear attack, but also monitor information and communicate with the rest of the government while on the move. The MERS units cost billions of dollars to develop and are packed with sophisticated technology. According to Cox News Service: “Sensitive radio, telephone, and satellite gear—much of it classified—is stored in custom-built trucks that resemble mobile bank vaults.… The mobile units can operate for a month without support. They include generators capable of powering a three-story airport terminal and a fuel tanker that can suck diesel fuel from whatever service stations survive the nuclear blast.” One truck carries a pop-up satellite dish and weighs 24 tons. Early models, however, are inundated with problems. When the first two MERS prototypes are tested in 1984, one gets wedged beneath a highway overpass because it is too tall, while the other causes a road to collapse because it is too heavy. There are also technical flaws. The communication system at the heart of the Continuity of Government program does not function properly from late 1985 until at least December 1990 (see Late 1985 and December 1990). Despite the complications, FEMA eventually constructs 300 MERS vehicles and stations them at secure facilities in Washington State, Massachusetts, Denver, southern Georgia, and rural Texas. Most of the MERS vehicles are used rarely, if ever. “Billions of dollars were spent on such equipment, much of which is now gathering dust in Army depots,” the New York Times reports in 1994. (Emerson 8/7/1989; Cox News Service 2/22/1993; Weiner 4/18/1994)

President Reagan signs classified National Security Decision Directive 55, Enduring National Leadership. The directive authorizes a dramatic expansion of the highly secretive Continuity of Government (COG) procedures, intended to ensure the survival of the federal government in times of extreme national emergency. NSDD-55 will spawn a new wave of ultra-secretive programs and policies aimed at protecting the federal government during disasters, particularly in cases of prolonged nuclear war. A clandestine branch of the Federal Emergency Management Agency (FEMA), known as the National Preparedness Directorate, will oversee many of the revamped COG programs. President Reagan’s directive substantially boosts spending for “government preparedness” within FEMA, from $21.9 million to $131 million a year. Spending for civil defense within FEMA is increased as well. Also around this time, a highly clandestine agency, the National Program Office (NPO), is established by way of a top-secret presidential directive (see (1982 -1991)). It is unclear, however, if this directive is NSDD-55, which is classified and never made public. NSDD-55 will be briefly mentioned years later in media reports, but details of its contents will remain unknown. Some information regarding the document’s background will be confused in the press. Cox News Service will mistakenly identify the order as National Security Directive 58, while the New York Times will report it was signed in January 1983. Records gathered by the Federation of American Scientists will date the directive September 14, 1982. (CNN Special Assignment 11/17/1991; Cox News Service 2/22/1993; Weiner 4/18/1994; Federation of American Scientists 6/9/2009)

The Clinton administration reorganizes the Federal Emergency Management Agency (FEMA), shifting resources away from secret projects and into disaster relief programs. During the previous two administrations, FEMA’s resources were overwhelmingly geared towards the highly classified Continuity of Government program, meant to keep the government functioning in times of extreme national emergency (see April 1, 1979-Present). The changes to the disaster agency are prompted by strong criticism of FEMA’s response to Hurricane Andrew (see August-September 1992). The secret COG programs are scaled back, but not totally discontinued. The newly appointed director of FEMA, James Lee Witt, eliminates FEMA’s secretive National Preparedness Directorate and shifts its responsibilities to other sections of the disaster agency. FEMA’s budget shows a dramatic drop in funding for secret projects, from about $100 million in 1993 to only $7.5 million in 1994. “What [Director Witt has] done is put FEMA in an all-hazards approach and put it aboveboard,” says FEMA spokesperson Morrie Goodman. “There are, of course,” Goodman adds, “certain areas that can’t be discussed or even acknowledged. That’s just the nature of the beast.” Indeed, uncertainties remain regarding the true extent of FEMA’s reformation. As Mother Jones magazine notes, the reduced classified budget “reflects only a fragment of FEMA’s investment in doomsday preparations, given that many former projects have been redesignated as ‘dual-use’ responses for both natural disasters and national security emergencies.” According to Mother Jones, “much of the doomsday bureaucracy remains intact, parts of the fifth floor are still restricted, and there has been no concerted effort to declassify the underground command posts.” Government officials will claim in 1994 that the COG program is coming to a total end (see April 18, 1994), but FEMA will continue to pursue its secret agenda for years to come (see April 1, 1979-Present). (National Academy of Public Administration 2/1993

The Federal Emergency Management Agency (FEMA), known best as a relief agency for victims of natural disasters, is preoccupied with preparations for a nuclear doomsday, according to Cox News Service. FEMA employees planning for natural disasters are outnumbered more than three-to-one by those working for the agency’s National Preparedness Directorate, which is responsible for overseeing preparations for nuclear war. Since its creation, FEMA has been secretly dedicated to the highly classified Continuity of Government (COG) program, meant to keep the government functioning in times of national emergency (see April 1, 1979-Present and 1982-1991). Cox News Service finds: “Only 20 members of Congress—those with adequate security clearance—know that rather than concentrating on natural disasters such as last year’s Hurricane Andrew, the Federal Emergency Management Agency has been gearing up for Armageddon. While a small group [of FEMA employees] is responsible for helping victims of natural disasters, most of the agency is preoccupied with developing high-tech gadgets for a nuclear doomsday.” (Cox News Service 2/22/1993)

May 8, 2001: Cheney to Oversee National Effort for Responding to Domestic Attacks, but No Action Is Taken before 9/11 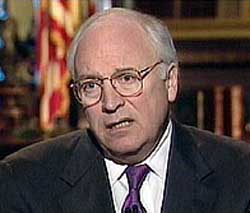 Vice President Dick Cheney on television, May 8, 2001. [Source: CNN]In a brief statement, President Bush announces that Vice President Dick Cheney will oversee a “coordinated national effort” aimed at integrating the government’s plans for responding to the use of a chemical, biological, radiological, or nuclear weapon within the United States. Bush declares, “Should our efforts to reduce the threat to our country from weapons of mass destruction be less than fully successful, prudence dictates that the United States be fully prepared to deal effectively with the consequences of such a weapon being used here on our soil.” Bush says a new agency within the Federal Emergency Management Agency (FEMA), known as the Office of National Preparedness, will be “responsible for implementing the results of those parts of the national effort overseen by Vice President Cheney that deal with consequence management.” The Office of National Preparedness appears to be a reincarnation of FEMA’s old National Preparedness Directorate (NPD), which was disbanded by the Clinton administration in 1993 (see January 1993-October 1994). During the 1980s and early 1990s, the NPD secretly spent billions of dollars preparing for nuclear war and other national emergencies as part of the highly classified Continuity of Government (COG) program (see February 1993, 1982-1991, and April 1, 1979-Present). (Cox News Service 2/22/1993) Under the Bush administration, the Office of National Preparedness (ONP) will apparently take over where the National Preparedness Directorate left off. According to Bush, the ONP “will coordinate all Federal programs dealing with weapons of mass destruction consequence management within the Departments of Defense, Health and Human Services, Justice, and Energy, the Environmental Protection Agency, and other federal agencies.” Cheney, who played a central role in the COG program during the Reagan administration (see 1981-1992 and 1980s), informs CNN, “[O]ne of our biggest threats as a nation” could be “domestic terrorism, but it may also be a terrorist organization overseas or even another state using weapons of mass destruction against the US.… [W]e need to look at this whole area, oftentimes referred to as homeland defense.” According to FEMA, the ONP will be up and running as early as the summer of 2001. President Bush says he “will periodically chair a meeting of the National Security Council to review these efforts.” (CNN 5/8/2001; White House 5/8/2001; Rich 7/8/2002) Cheney is meant to head a group that will draft a national terrorism response plan by October 1. (Chicago Sun-Times 5/5/2001; Waller 6/18/2001) But, according to Barton Gellman of the Washington Post, “Neither Cheney’s review nor Bush’s took place.” (Gellman 1/20/2002) Former Senator Gary Hart (D-CO) later implies that Bush assigned this specific role to Cheney in order to prevent Congress from enacting counterterrorism legislation proposed by a bipartisan commission he had co-chaired in January (see January 31, 2001). (Talbot 4/2/2004; Hart 4/6/2004) In July, two senators will send draft counterterrorism legislation to Cheney’s office, but a day before 9/11, they are told it might be another six months before he gets to it (see September 10, 2001). (Hirsh and Isikoff 5/27/2002) Cheney’s “National Preparedness Review” is just beginning to hire staff a few days before 9/11 (see September 10, 2001). (Rood 4/15/2004)