This page can be viewed at http://www.historycommons.org/entity.jsp?entity=national_security_political_action_committee_1

National Security Political Action Committee (NSPAC) was a participant or observer in the following events:

The Bush presidential re-election campaign, trailing Democratic challenger Michael Dukakis, the governor of Massachusetts, in the polls, decides on a “two-track” campaign strategy. The strategy is crafted by campaign manager Lee Atwater. The “high road” track will be taken by President Bush and the campaign directly, attacking Dukakis’s record on law enforcement and challenging his reputation as having led Massachusetts into a period of economic growth (the so-called “Massachusetts Miracle”). The “low road,” designed by Atwater to appeal to the most crude racial stereotypes (see 1981), is to be taken by ostensibly “independent” voter outreach organizations. Because of a loophole in campaign finance rules, the Bush campaign could work closely with “outside groups” and funnel money from “independent” organizations to the outside groups, while denying any connections with those groups were they to run objectionable or negative political ads. Atwater wants to avoid a potential backlash among voters, who may turn against the campaign because of their antipathy towards “attack politics.” Atwater and his colleagues determine that the outside groups will use “brass knuckle” tactics to attack Dukakis, and because the ads come from these “independent” organizations, the Bush campaign can distance itself from the groups and even criticize them for being too negative. In 1999, InsidePolitics.org will write: “In so doing, Bush’s presidential effort would train a generation of campaign operatives how to run a negative campaign. Its ‘two-track’ approach would become a model of how to exploit campaign finance laws and use outside groups to deliver hard-hitting messages on behalf of the candidate. Over the course of the following decade, this strategy would become commonplace in American elections.” The idea of “outsourcing” attack ads had been popularized by the 1980 Reagan presidential campaign, which used what it called “independent expenditures” to finance “outside” attacks on its Democratic opponent, President Jimmy Carter. In 1988, “independent” conservative groups spend $13.7 million on the Bush campaign, most of which goes towards attacks on Dukakis. In comparison, progressive and liberal groups spend $2.8 million on behalf of Dukakis—an almost five-to-one discrepancy. Most of the outside money is spent on television advertising. InsidePolitics will write, “Increasingly, candidates were discovering, electoral agendas and voter impressions could be dominated through a clever combination of attack ads and favorable news coverage.” (Inside Politics (.org) 1999) The result of Atwater’s “two-track” strategy is the “Willie Horton” ad, which will become infamous both for its bluntly racist appeal and its effectiveness (see September 21 - October 4, 1988). An earlier “independent” ad attacking Dukakis’s environmental record provides something of a template for the Horton ad campaign. The so-called “Boston Harbor” ad, which depicted garbage floating in the body of water, challenged Dukakis’s positive reputation as a pro-environmental candndate. The ad helped bring Dukakis’s “positives” down, a strong plus for Bush, whose record as an oil-company executive and reputation as a powerful political friend to the oil companies hurts him in comparison with Dukakis. In July 1988, Readers Digest, a magazine known for its quietly conservative slant, publishes a profile of Horton titled “Getting Away With Murder.” The Bush campaign reprints the article and distributes it by the tens of thousands around the country. (Simon 10/1/1990; Inside Politics (.org) 1999) 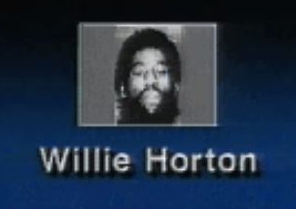 Two Democratic organizations in Ohio file a complaint with the Federal Election Commission (FEC) in the matter of the now-infamous “Willie Horton” ads used to great effect by the Bush re-election campaign (see June-September 1988 and September 21 - October 4, 1988). The complaint alleges that the ostensibly independent political organization that created and financed the first ad, the National Security Political Action Committee (NSPAC), violated the law on independent expenditures (see May 1990 and After). The complaint uncovers numerous connections between NSPAC and the Bush campaign. However, the FEC refuses to charge the Bush campaign with campaign finance violations. (Inside Politics (.org) 1999)

May 1990 and After: Democrats Accuse Bush Campaign of Illegal Campaign Activity over Horton Ad

The Ohio Democratic party and a group called Black Elected Democrats of Ohio file a complaint with the Federal Election Commission (FEC) over the infamous “Willie Horton” campaign ad of 1988 (see September 21 - October 4, 1988), claiming that the “outside” organization that released the ad, the National Security Political Action Committee (NSPAC), violated the law on independent expenditures, and that NSPAC functioned as an arm of the 1988 Bush presidential campaign. According to the complaint, it was legal for NSPAC to expend funds criticizing Democratic presidential candidate Michael Dukakis and supporting President Bush’s election only if the expenditures were independent and uncoordinated between the two organizations. Any spending that was made “in cooperation, consultation, or concert, with, or at the request or suggestion of, a candidate, his authorized political committees, or their agents,” represented an illegal “in-kind contribution” in excess of federal contribution limits. The FEC conducts an investigation into the relationship between NSPAC and the Bush campaign. The investigation uncovers several ties between the two organizations. For example, Larry McCarthy, the NSPAC media consultant who, as a top marketing expert for the NSPAC’s “Americans for Bush” organization, created the Horton ad, worked for top Bush campaign adviser Roger Ailes; McCarthy was a former senior vice president of Ailes Communications, Inc. (ACI), which functioned as the main media consulting firm for the Bush campaign. McCarthy tells investigators he worked at ACI until January 1987, but continued to work with ACI on “a contractual basis” until December 1987, when he began working as Senator Robert Dole (R-KS)‘s media consultant. McCarthy admits to having a number of contacts with Ailes during the Bush-Dukakis campaign, but says some of them were “of a passing social nature,” such as “running into one another in restaurants or at airports.” He denies discussing “anything relative to the Bush presidential campaign, NSPAC, or political matters.” McCarthy’s story is contradicted by Ailes, who tells the FEC that he had talked to McCarthy twice about opportunities to work for the Bush campaign, opportunities Ailes says McCarthy lost by working for NSPAC. The FEC also discovers that another former ACI employee, Jesse Raiford of Raiford Communications, worked on the Horton ad, and while doing so “simultaneously received compensation from NSPAC and the Bush campaign.” Raiford also “expended NSPAC funds for the production of the Willie Horton ad.” Though there is clear evidence of illegal connections and complicity between the Bush campaign and NSPAC, the FEC’s Board of Commissioners deadlock 3-3 on voting whether to bring formal charges against the two organizations. The swing vote, commissioner Thomas Josefiak, says the explanations from Ailes and McCarthy about their lack of substantive contacts during the campaign “were plausible and reasonably consistent.” Josefiak says both were guilty of “bad judgment” and may have acted “foolish[ly],” but did nothing warranting legal action. The FEC also determines that Raiford only “performed technical tasks” for the two organizations, “and played no role in any substantive or strategic decisions made by either organization.” The commissioners conclude that neither organization violated campaign finance law. (Inside Politics (.org) 1999)

Fox News talk show host Sean Hannity claims, falsely, that former vice president and Democratic presidential candidate Al Gore “brought Willie Horton to the American people.” Hannity is referring to the infamous “Willie Horton” ad of the 1988 presidential campaign, a Republican campaign strategy that claimed African-American Willie Horton was released and went on to rape a white woman by Democratic presidential candidate Michael Dukakis (see September 21 - October 4, 1988). Hannity’s statement comes in response to a recent citation of the Horton ad by Princeton University professor Cornel West, who cited the ad as an example of the Republican Party’s political exploitation of race. Hannity notes correctly that in the 1988 Democratic presidential primaries, Gore asked Dukakis about “weekend passes for convicted criminals,” referring to the Massachusetts furlough program that freed Horton. However, Gore never mentioned Horton at all. The first national mention of Horton came in the ads released by the Bush campaign and by an ostensibly independent conservative organization, the National Security Political Action Committee (NSPAC). According to progressive media watchdog organization Media Matters, Hannity has made similar claims about Gore first bringing up Horton in the past. (Media Matters 11/10/2004)