This page can be viewed at http://www.historycommons.org/entity.jsp?entity=nawaf_bin_abdul_aziz

Nawaf bin Abdul Aziz was a participant or observer in the following events:

Prince Turki al-Faisal, head of Saudi Arabia’s intelligence service for 24 years, is replaced. No explanation is given. He is replaced by Nawaf bin Abdul Aziz, his nephew and the king’s brother, who has “no background in intelligence whatsoever.” (Agence France-Presse 8/31/2001; Henderson 10/22/2001; Seattle Times 10/29/2001) The Wall Street Journal later reports: “The timing of Turki’s removal—August 31—and his Taliban connection raise the question: Did the Saudi regime know that bin Laden was planning his attack against the US? The current view among Saudi-watchers is probably not, but that the House of Saud might have heard rumors that something was planned, although they did not know what or when. (An interesting and possibly significant detail: Prince Sultan, the defense minister, had been due to visit Japan in early September, but canceled his trip for no apparent reason less than two days before an alleged planned departure.)” (Henderson 10/22/2001) It will later come out that Turki’s removal takes place during a time of great turmoil in the relationship between the US and Saudi Arabia, though it is not known if there is a connection (see August 27, 2001, August 29-September 6, 2001, and September 6, 2001). Turki is later sued in August 2002 for his role in 9/11 (see August 15, 2002), and is later appointed ambassador to Britain (see October 18, 2002) and then ambassador to the US (see August 21, 2005). 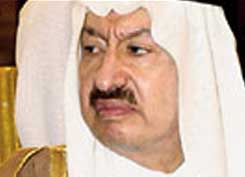 Prince Nawaf bin Abdul Aziz. [Source: New York Times]According to the private intelligence service Intelligence Online, a secret meeting between fundamentalist supporters in Saudi Arabia and the ISI takes place in Riyadh, Saudi Arabia, on this day. Crown Prince Abdullah, the de facto ruler of Saudi Arabia, and Prince Nawaf bin Abdul Aziz, the new head of Saudi intelligence, meet with Gen. Mohamed Youssef, head of the ISI’s Afghanistan Section, and ISI Director Lt. Gen. Mahmood Ahmed (just returning from discussions in Afghanistan). They agree “to the principle of trying to neutralize Osama bin Laden in order to spare the Taliban regime and allow it to keep its hold on Afghanistan.” There has been no confirmation that this meeting in fact took place, but if it did, its goals were unsuccessful. (Intelligence Online 10/4/2001) There may have been a similar meeting before 9/11 in the summer of 2001.

September 6, 2002: Al-Qaeda Figure with Ties to Rich Saudis Is Declared Terrorist Financier, but to Little Effect 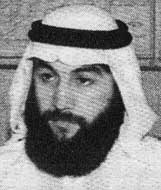 Wael Hamza Julaidan. [Source: Public domain, via Evan Kohlmmann]The US and United Nations designate Wael Hamza Julaidan a terrorist financier and freezes the funds of the Rabita Trust. Julaidan worked with bin Laden’s mentor Abdullah Azzam in the Muslim World League in Pakistan in the 1980s and was one of the founders of al-Qaeda in 1988 (see August 11-20, 1988). (Kaplan, Ekman, and Latif 12/15/2003) Julaidan’s name was on the “Golden Chain” list of early al-Qaeda funders (see 1988-1989), serving as an intermediary between bin Laden and Saudi multimillionaires. Beginning in 2000, he became director general of the Rabita Trust, a Pakistani charity which the UN determined has been funding al-Qaeda. The US froze the bank accounts of the Rabita Trust shortly after 9/11 due to suspected terrorist links, but the organization changed its name and continued to operate (see Mid-September-October 12, 2001). Julaidan is considered highly connected in Saudi Arabia and even though the Saudi government officially goes along with the terrorist designations of Julaidan and the Rabita Trust, some top Saudi officials publicly defend him. For instance, Saudi Interior Minister Prince Nawaf bin Abdul Aziz publicly suggests that Julaidan is innocent. Julaidan is not arrested and the Saudi government offers no proof that they seized any of his or Rabita’s bank accounts. In December 2003, the Washington Post will report that US and UN officials believe Julaidan continues to work with charity fronts and handles large sums of money. (Farah 12/14/2003; Burr and Collins 2006, pp. 100-101)