This page can be viewed at http://www.historycommons.org/entity.jsp?entity=oded_ellner

Oded Ellner was a participant or observer in the following events:

A homemaker living near Liberty State Park, Jersey City, New Jersey sees three men behaving strangely on a nearby roof and alerts the authorities. This homemaker, who has given only her first name Maria, is called by a neighbor shortly after the first plane has hit the WTC and is told about the impact. She has a view of the WTC from her apartment building so she gets her binoculars and watches the disaster. However, she also notices three young men kneeling on the roof of a white van in the parking lot of her apartment building. Maria will later recall, “They seemed to be taking a movie.” They are taking video or photos of themselves with the WTC burning in the background. But what strikes Maria is their expressions: “They were like happy, you know… They didn’t look shocked to me. I thought it was very strange.” She writes down the license plate number of the van and calls the police. (ABC News 6/21/2002) Apparently the men leave the area a few minutes after the first attack is over. (Ketcham 2/7/2007) An FBI lookout bulletin for the van will be issued later in the day (see 3:31 p.m. September 11, 2001) and the three men (plus two more discovered with them) will be detained (see 3:56 p.m. September 11, 2001). When the men detained, one of them will be found with pictures of the group standing with the burning wreckage of the WTC in the background. (Perelman 3/15/2002) At least some of the pictures were taken while standing on top of the van. (Cowan 10/8/2001) The lawyer for the five men will later note that one photograph developed by the FBI shows one of the men, Sivan Kurzberg, holding a lighted lighter in the foreground, with the burning WTC in the background. (Lewin and Cowan 11/21/2001) It will apparently be determined at least two of the men are Israeli spies, but what they were doing and why will remain in dispute. One of these Israelis will later say, “our purpose was to document the event.” (ABC News 6/21/2002) 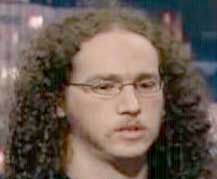 Yaron Shmuel, one of the five Israelis found in the van. [Source: Public domain via Israeli television]The FBI issues a BOLO (be on lookout) bulletin for three suspicious men who were seen leaving the New Jersey waterfront minutes after the first hijacked plane hit the WTC (see Shortly After 8:46 a.m. September 11, 2001). Law enforcement officers in the greater New York City area are warned in a radio dispatch to watch for a “vehicle possibly related to New York terrorist attack.” The bulletin reads, in part: “White, 2000 Chevrolet van…with ‘Urban Moving Systems’ sign on back seen at Liberty State Park, Jersey City, NJ, at the time of first impact of jetliner into World Trade Center…. Three individuals with van were seen celebrating after initial impact and subsequent explosion. FBI Newark Field Office requests that, if the van is located, hold for prints and detain individuals.” The van is located a short time later and five men inside it are arrested (see 3:56 p.m. September 11, 2001). (Ketcham 2/7/2007)

The white van used by five Israeli agents as they were leaving New York on 9/11.Five Israelis are arrested for “puzzling behavior” related to the WTC attacks. Shortly after an FBI lookout bulletin was issued for a van with the words “Urban Moving Systems” written on the side, officers with the East Rutherford Police Department in New Jersey stop the van after matching the license plate number with the one given in the bulletin. According to the police report, Officer Scott DeCarlo and Sgt. Dennis Rivelli approach the van and demand the driver exit the vehicle. The driver, Sivan Kurzberg, does not obey after being asked several more times, so the police physically remove Kurzberg and four other men from the van and handcuff them. They have not been told the reasons for their arrest, but Kurzberg tells them, “We are Israeli. We are not your problem. Your problems are our problems. The Palestinians are the problem.” Again before the police have made any mention of the 9/11 attacks, another one of the arrested men says, “[W]e were on the West Side Highway in New York City during the incident.” In fact, it will later be determined they were on the roof of a building at Liberty State Park, watching and videotaping the first crash into the WTC (see Shortly After 8:46 a.m. September 11, 2001). (Lima 9/12/2001; Melman 9/17/2001; Ketcham 2/7/2007) The FBI and additional police quickly arrive. They shut down the section of Route 3 in East Rutherford where the van was stopped and evacuate a nearby hotel as a security precaution. (Lima 9/12/2001) One man is found with $4,700 in cash hidden in his sock, another has two foreign passports on him, and a box cutter is found in the van. (ABC News 6/21/2002) Another has pictures of the men standing with the burning wreckage of the WTC in the background. (Perelman 3/15/2002) All five identify themselves as Israeli citizens and claim to be working for the New Jersey-based Urban Moving Systems company. In addition to the driver Sivan Kurzberg, the others are identified as Paul Kurzberg (Sivan’s brother), Oded Ellner, Omer Marmari, and Yaron Shmuel. The men are detained but not charged. (Perelman 3/15/2002; ABC News 6/21/2002) The next day it will be reported that “bomb-sniffing dogs reacted as if they had detected explosives.” An investigator high up in the Bergen County law enforcement hierarchy will say in 2006, “There are maps of the city in the car with certain places highlighted…. It looked like they’re hooked in with this [referring to the 9/11 attacks]. It looked like they knew what was going to happen.…It looked like they knew what was going to happen when they were at Liberty State Park.” (Lima 9/12/2001) The FBI will later conclude at least two of the five are Mossad agents and that all were on a Mossad surveillance mission. The FBI interrogates them for weeks. (Perelman 3/15/2002) They are held on immigration violation charges, but will be released 71 days later (see November 20, 2001). (ABC News 6/21/2002)

From left to right: Oded Ellner, Omer Marmari, and Yaron Shmuel. Three of the five accused Israelis briefly appear on Israeli television in November 2001 after being released and deported. [Source: Public domain via Israeli television] (click image to enlarge)Around this time intense political pressure is put on US officials holding five Israeli men arrested for suspicious behavior at the time of the 9/11 attacks (see 3:56 p.m. September 11, 2001). According to the Israeli newspaper Ha’aretz, Deputy Secretary of State Richard Armitage and two unidentified “prominent New York congressmen” lobby heavily for their release. According to a source at ABC News, well-known criminal lawyer Alan Dershowitz also becomes involved as a negotiator to help get the men released. (Dershowitz will later refuse to comment on the matter.) (Ketcham 2/7/2007) ABC News will later report that was “high-level negotiations between Israeli and US government officials” over the five men, resulting in a settlement. (ABC News 6/21/2002) Apparently the political pressure will succeed because the men will be released a few weeks later (see November 20, 2001]).

November 20, 2001: Israelis Who Videotaped WTC Attack Are Released and Deported 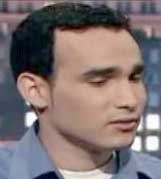 Oded Ellner, one of the five Israelis arrested on 9/11. [Source: Public domain via Israeli television]The five Israelis arrested on 9/11 for videotaping the WTC attack and then cheering about it (see 3:56 p.m. September 11, 2001) are released and deported to Israel. Some of the men’s names had appeared in a US national intelligence database, and the FBI has concluded that at least two of the men were working for the Mossad, according to ABC News. However, the FBI says that none of the Israelis had any advanced knowledge of the 9/11 attacks, and they were released as part of a deal between the US and the Israeli government. After their release, they claim to have been tortured. (Perelman 3/15/2002; ABC News 6/21/2002)