This page can be viewed at http://www.historycommons.org/entity.jsp?entity=omar_khadr_1

Omar Khadr was a participant or observer in the following events:

FBI agent Robert Fuller interrogates Canadian citizen Omar Khadr at Bagram Air Base in Afghanistan. Fuller is an FBI agent who failed to locate the 9/11 hijackers in the US before 9/11 (see September 4, 2001, September 4-5, 2001, and September 4-5, 2001), while Khadr is a minor accused of throwing a hand grenade that killed a US soldier in Afghanistan. The interrogation lasts from October 7 to October 22. On the first day, Fuller shows Khadr a black-and-white photograph provided by the FBI in Massachusetts of Maher Arar, a Canadian terror suspect the US has been holding in New York (see September 26, 2002). Fuller will later say that Khadr identifies Arar as someone he has seen in a safe house run by al-Qaeda in Afghanistan and that he also “may have” seen Arar at a terror training camp near Kabul. However, at the time Khadr says he saw Arar in Afghanistan—September and October 2001—Arar was first in the US and then in Canada under surveillance by the local authorities, according to Walter Ruiz, a lawyer who will later represent Khadr. Ruiz will also point out that it takes Khadr several minutes to identify Arar. Another of Khadr’s lawyers, Lieutenant Commander Bill Kuebler, will say that Khadr repeatedly lies to his interrogators to avoid being abused. Deputy Attorney General Larry Thompson decides that Arar will be deported to Syria on this day (see October 7, 2002), and the deportation is soon carried out (see October 8, 2002). However, it is unclear whether Thompson’s decision is motivated by Fuller’s interrogation of Khadr or other factors. (CBC News 1/20/2009; Edwards 1/20/2009) Fuller will testify about the identification at a Guantanamo hearing (see January 19, 2009), but facts calling it into question will emerge under cross-examination (see January 20, 2009).

A judge says that the designation “enemy combatant,” used to label detainees held by the US in Guantanamo Bay, is meaningless, throwing proceedings for hundreds of the men into what the Guardian describes as “chaos.” Tribunals had been held in Guantanamo Bay to determine whether detainees held there were “enemy combatants,” and it was thought that such designation was a necessary preliminary step to putting them on trial. However, the judge, Colonel Peter Brownback, says that it is not enough to designate a detainee as an “enemy combatant,” and that a tribunal must be proceeded by a designation that a detainee is an “unlawful enemy combatant,” as this is the wording used in the Military Commissions Act, which established the tribunals. Colonel Brownback throws out cases against detainees Omar Khadr and Salim Ahmed Hamdan, alleged to have been Osama bin Laden’s chauffeur, saying that a person “has a right to be tried only by a court that has jurisdiction over him,” and the court does not have that right. The ruling means that none of the other hundreds of detainees can be brought before the tribunals, because the incorrect designation was applied to all of them. However, the ruling is without prejudice, and the US can still try to re-designate detainees “unlawful enemy combatants” and bring them before tribunals. Defense attorney Kristine Huskey calls the situation a “shambles,” and says, “It’s another example of how everything has been so ad hoc. The Military Commissions Act was just not done thoughtfully.” Another defense attorney, Colonel Dwight Sullivan, comments, “The system right now should just stop… The commission is an experiment that failed and we don’t need any more evidence that it is a failure.” (Goldenberg 6/5/2007)

Darrel Vandeveld, in a photo from 2001. [Source: Go Erie (.com)]Former military prosecutor Lieutenant Colonel Darrel Vandeveld agrees with the American Civil Liberties Union’s position that Guantanamo detainee Mohammed Jawad should be released. Vandeveld was the lead prosecutor on the military commission trying Jawad, who has been held for over six years. Vanderveld says in a declaration that there is “no credible evidence or legal basis” to justify Jawad’s detention or prosecution. “There is, however, reliable evidence that he was badly mistreated by US authorities both in Afghanistan and at Guantanamo,” says the declaration, which Vandeveld files in a Washington court in support of the ACLU’s habeas corpus petition. Jawad, who was captured in Afghanistan in 2002 at age 16, was accused of throwing a hand grenade at two US soldiers and their interpreter. Jawad and fellow detainee Omar Khadr, a Canadian citizen, are the last two detainees to face charges based on acts they allegedly committed while they were juveniles. The ACLU maintains that Jawad was tortured to force him to confess. Vandeveld resigned from the military commissions in September 2008, saying he could not ethically proceed with Jawad’s case. In his declaration, Vandeveld says the “chaotic state of evidence” in the military commissions “make it impossible for anyone to harbor the remotest hope that justice is an achievable goal” (see January 20, 2009). (Agence France-Presse 1/13/2009)

Robert Fuller, an FBI agent who interrogated Canadian terror suspect Omar Khadr at Bagram Air Base in 2002 (see October 7-22, 2002), testifies about the interrogation at a Guantanamo hearing. The hearing was requested by Khadr’s defence team, to have self-incriminating statements Khadr made during interrogations suppressed ahead of proceedings before a military commission. Fuller says that, during the interrogation, Khadr told him he recognised a man named Maher Arar from a safe house run by al-Qaeda in Afghanistan and also possibly from a terror training camp. “He identified him by name,” Fuller says. (CBC News 1/20/2009; Edwards 1/20/2009) However, cross-examination by the defense the next day will raise several issues that cast doubt on the identification (see January 20, 2009).

Under cross-examination at a pre-military commission hearing, FBI agent Robert Fuller provides a version of an interrogation of detainee Omar Khadr different to the one he gave a day earlier under direct examination (see January 19, 2009). Fuller had previously described an interrogation of Khadr at Bagram Air Base in Afghanistan where Khadr linked a terror suspect named Maher Arar to al-Qaeda (see October 7-22, 2002) through a photograph identification. However, a lawyer for Khadr pulls out Fuller’s contemporary report of the interrogation and shows that the identification did not happen immediately, as Fuller initially claimed, but that it took several minutes. Lawyers for Khadr will also argue that their client made false statements to interrogators to avoid abuse, and that Arar was in the US and Canada at the time Khadr said he saw him in Afghanistan. (CBC News 1/20/2009; Edwards 1/20/2009) 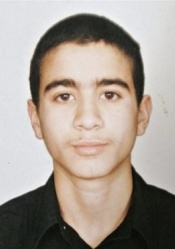 Omar Khadr. The photo, presumably taken in 2001, was given to Canadian reporters by his mother, Maha Khadr, after a 2005 press conference. [Source: Maha Khadr / Associated Press]Colonel Patrick Parrish, a military judge in the Guantanamo prosecutions, orders that the trial of Omar Khadr be suspended. President Obama has asked for all trials of Guantanamo detainees to be suspended for 120 days (see January 20, 2009). Other trials are almost certain to be suspended as well, including the trial of five detainees accused of participating in the 9/11 attacks. Khadr is accused of killing a US soldier in Afghanistan with a grenade during a firefight in 2001. Khadr, who was 15 at the time, was captured shortly thereafter. He has been in detention ever since. Military prosecutors say it is “in the interests of justice” to freeze the trials until about May 20 to give the new administration time to evaluate the cases and decide what forum best suits any future prosecution. Obama has repeatedly promised to shut down the Guantanamo prison camp; it is not clear what will happen to the approximately 245 detainees currently housed there. While officials of the former Bush administration have said they planned to bring some 80 detainees to trial, as yet only three trials have been held. (Reuters 1/21/2009) Prosecutor Clay Trivett says all pending cases should be suspended because a review of the military commissions system may result in significant changes. Khadr’s defense lawyer, Lieutenant Commander William Kuebler, says the suspension “has the practical effect of stopping the process, probably forever.… This military process and the charges Omar faced are dead.” Kuebler says Khadr should either be returned to his native Canada or tried in a civilian court. “He’s anxious, he’s nervous,” Kuebler says. “Let’s hope this creates the process… that will take Omar back to Canada.” The de facto leader of the five men accused of planning the 9/11 attacks, Khalid Shaikh Mohammed, tells court officials he opposes the delay. “We should continue so we don’t go backward, we go forward,” he says. (Associated Press 1/21/2009; Finn 1/21/2009)

The US Justice and Defense Departments announce that five detainees are to be moved from Guantanamo to New York, where they will face trial in ordinary civilian courts for the 9/11 attacks. The five are alleged 9/11 mastermind Khalid Shaikh Mohammed (KSM), Ramzi bin al-Shibh, who helped coordinate the attacks, Ali Abdul Aziz Ali and Mustafa Ahmed al-Hawsawi, who assisted some of the 19 hijackers in Asia, and Khallad bin Attash, who attended a meeting with two of the hijackers in January 2000 (see January 5-8, 2000). The five previously indicated they intend to plead guilty (see December 8, 2008). US Attorney General Eric Holder says: “For over 200 years, our nation has relied on a faithful adherence to the rule of law to bring criminals to justice and provide accountability to victims. Once again we will ask our legal system to rise to that challenge, and I am confident it will answer the call with fairness and justice.” Secretary of Defense Robert Gates was also involved in the decision on where to try the men. (US Department of Justice 11/13/2009) However, five detainees are to remain in the military commissions system. They are Ibrahim al-Qosi, Omar Khadr, Ahmed al-Darbi, Noor Uthman Mohammed, and Abd al-Rahim al-Nashiri. (McClatchy 11/14/2009) These five detainees are fighting the charges against them:

Khadr’s lawyers claim he was coerced into admitting the murder of a US solider in Afghanistan; (Edwards 11/14/2009)

Noor Uthman Mohammed denies most of the charges against him (see (Late 2004));