This page can be viewed at http://www.historycommons.org/entity.jsp?entity=operation_helmet_1

Operation Helmet was a participant or observer in the following events: 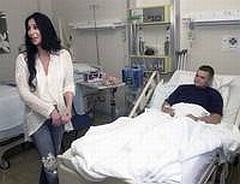 Cher talks with a wounded soldier at Landstuhl Medical Center in Germany. [Source: Todd Goodman / US Army]Cher, the celebrity singer and actress, calls in to a morning C-SPAN talk show broadcast. She calls anonymously to discuss her recent visit to the Walter Reed Army Medical Center, where she visited with soldiers wounded in Iraq. She praises the courage and resilience of the soldiers, many of whom have suffered horrific wounds. After she admits to being an entertainer who has worked with the USO, C-SPAN host Peter Slen realizes who she is, and asks, “Is this Cher?” She replies, “Yeah,” and continues to discuss the troops and their “unbelievable courage.” Shortly thereafter, she says: “I wonder why [Dick] Cheney, [Paul] Wolfowitz, [Paul] Bremer, the president—why aren’t they taking pictures with all these guys?… Talking about the dead and wounded, that’s two different things. But these wounded are so devastatingly wounded.… It’s unbelievable. You know, if you’re going to send these people to war, then don’t hide them.… Have some news coverage where people are sitting and talking to these guys and seeing how they are and seeing their spirit. It’s just—I think it’s a crime.” (Ridgway 11/5/2003; Carter 2004, pp. 65-66) Shortly after the Walter Reed visit, Cher will become heavily involved in working with wounded veterans through organizations such as Operation Helmet and the Intrepid Fund. She will say of her activism: “I don’t have to be for this war to support the troops because these men and women do what they think is right. They do what they’re told to do. They do it with a really good heart. They do the best they can. They don’t ask for anything.… I can’t speak for everyone, but everyone seems to be against the war but not realizing that that’s not good enough. You’ve got to do something besides just be against it. You’ve got to do some helping as well.” (Mraz 7/16/2006)