This page can be viewed at http://www.historycommons.org/entity.jsp?entity=osama_awadallah_1

Osama Awadallah was a participant or observer in the following events:

Sam’s Star Mart gas station. [Source: Daniel Hopsicker]9/11 hijacker Nawaf Alhazmi works at a gas station while living in San Diego where other suspected Islamist militants work. This is the only apparent instance of any of the hijackers having a job while in the US. He and 9/11 hijacker Khalid Almihdhar frequently socialize at the gas station, but only Alhazmi works there for pay on and off for about a month at some point after Almihdhar has gone overseas in June 2000. (Goldstein and Booth 12/29/2001; McDermott 9/1/2002; US Congress 7/24/2003, pp. xii, 11-12, 143-146, 155-157

)
Gas Station's Owner Was Investigated - The Texaco gas station, Sam’s Star Mart, is owned by Osama “Sam” Mustafa. (Thornton 7/25/2003) Mustafa was first investigated by the FBI in 1991 after he told a police officer that the US needed another Pan Am 103 attack and that he could be the one to carry out the attack. He also said all Americans should be killed because of the 1991 Iraq War. In 1994, he was investigated for being a member of the Palestinian organizations PFLP and PLO and for threatening to kill an Israeli intelligence officer living in San Diego. The investigation was closed, but reopened again in 1997 when he was tied to a possible plot in North Carolina. Apparently, it was closed again before 9/11. He also associates with Osama Basnan and others who have contacts with the hijackers. Witnesses later claim he cheered when he was first told of the 9/11 attacks. (US Congress 7/24/2003, pp. xii, 11-12, 143-146, 155-157

)
Gas Station's Manager Was Also Investigated - The gas station is managed by Ed Salamah (who apparently is also known as Iyad Kreiwesh). (Goldstein and Booth 12/29/2001; Thornton 7/25/2003) In January 2000, the brother of an unnamed, known al-Qaeda operative was under surveillance and was seen chatting with Salamah. The Los Angeles FBI office was investigating this operative, and it called Salamah about the person. Salamah refused to come to Los Angeles for an interview, and refused to give his home address to be interviewed there. Faced with a reluctant witness, the FBI dropped the matter. (US Congress 7/24/2003, pp. xii, 11-12, 143-146, 155-157

; Isikoff and Klaidman 7/28/2003)
Other Gas Station Employees May Know of 9/11 Plot - Mohdar Abdullah, a friend of Alhazmi and Almihdhar, also works at the gas station around this time. He may have learned of the 9/11 plot as early as the spring of 2000 (see Early 2000). Additionally, according to one witness, Abdullah, Osama Awadallah, Omar Bakarbashat, and other gas station employees will appear to show foreknowledge of the 9/11 attacks one day before they take place (see Late August-September 10, 2001). (9/11 Commission 7/24/2004, pp. 219-220, 249-50, 532)
FBI Informant Stays Silent - The hijackers are living with an FBI informant named Abdussattar Shaikh who is aware of their contact with at least Mustafa, and Shaikh has given reports about Mustafa to the FBI in the past. However, Shaikh fails to tell the FBI about their contacts with him. The 9/11 Congressional Inquiry will later strongly imply that Salamah and Mustafa assisted the hijackers with the 9/11 plot, but the FBI will appear uninterested in them and will maintain that the hijackers received no assistance from anyone. (US Congress 7/24/2003, pp. xii, 11-12, 143-146, 155-157

) Shaikh will also later admit that he knew Alhazmi was working illegally at the gas station, but he didn’t tell his FBI handler about this (see Autumn 2000).

Osama Awadallah. [Source: Chris Park / Associated Press]Associates of 9/11 hijackers Nawaf Alhazmi and Khalid Almihdhar in San Diego reportedly change their behavior and seem to be aware that “something big” is about to happen. But it is not clear how they would have obtained this information.

He will later brag to someone in prison that he was told of the attack date three weeks in advance (see Early 2000).

Both Abdullah and another former associate of the hijackers, Yazeed al-Salmi, suddenly become intent on marrying before 9/11. The 9/11 Commission will quote a witness saying al-Salmi told him, “I knew they were going to do something, that is why I got married.”

In addition, employees at the Texaco station where Alhazmi worked (see Autumn 2000), including one named Iyad Kreiwesh, apparently expect that law enforcement authorities will visit them in the near future.

Further, according to one witness, early on the morning of September 10, Abdullah, Osama Awadallah, Omar Bakarbashat, and others behave suspiciously at the gas station. The witness will say that after the group meets, Awadallah tells the others, “[I]t is finally going to happen” and they celebrate with high fives. (9/11 Commission 7/24/2004, pp. 219-220, 249-50, 532) 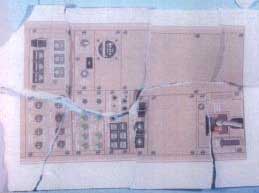 One page of a torn up 757 cockpit poster used by the hijackers. It was found in a trash compactor at the Days Inn, near the Newark Airport. [Source: FBI]Investigators find a remarkable number of possessions left behind by the hijackers:

Two of Mohamed Atta’s bags are found on 9/11. They contain a handheld electronic flight computer, a simulator procedures manual for Boeing 757 and 767 aircraft, two videotapes relating to “air tours” of the Boeing 757 and 747 aircraft, a slide-rule flight calculator, a copy of the Koran, Atta’s passport, his will, his international driver’s license, a religious cassette tape, airline uniforms, a letter of recommendation, “education related documentation” and a note (see September 28, 2001) to other hijackers on how to mentally prepare for the hijacking. (NPA 9/15/2001; Cullen and Ranalli 9/18/2001; Fisk 9/29/2001; Harkavy 10/5/2001) Author Terry McDermott will later comment, “Atta’s bag contained nearly every important document in his life… If you wanted to leave a roadmap for investigators to follow, the suitcase was a pretty good place to start.” (McDermott 2005, pp. 306)

Marwan Alshehhi’s rental car is discovered at Boston’s Logan Airport containing an Arabic language flight manual, a pass giving access to restricted areas at the airport, documents containing a name on the passenger list of one of the flights, and the names of other suspects. The name of the flight school where Atta and Alshehhi studied, Huffman Aviation, is also found in the car. (Rempel and Serrano 9/13/2001)

A car registered to Nawaf Alhazmi is found at Washington’s Dulles Airport on September 12. This is the same car he bought in San Diego in early 2000 (see March 25, 2000). Inside is a copy of Atta’s letter to the other hijackers, a cashier’s check made out to a flight school in Phoenix, four drawings of the cockpit of a 757 jet, a box cutter-type knife, maps of Washington and New York, and a page with notes and phone numbers. (Arizona Daily Star 9/28/2001; King and Bhatt 10/21/2001; Schrom 10/1/2002) The name and phone number of Osama Awadallah, a friend of Alhazmi and Khalid Almihdhar in San Diego, is also found on a scrap of paper in the car (see September 12, 2001 and After). (Hirschkorn 2/1/2002)

A rental car is found in an airport parking lot in Portland, Maine. Investigators are able to collect fingerprints and hair samples for DNA analysis. (Portland Press Herald 10/14/2001)

Two days before 9/11, a hotel owner in Deerfield Beach, Florida, finds a box cutter left in a hotel room used by Marwan Alshehhi and two unidentified men. The owner checks the nearby trash and finds a duffel bag containing Boeing 757 manuals, three illustrated martial arts books, an 8-inch stack of East Coast flight maps, a three-ring binder full of handwritten notes, an English-German dictionary, an airplane fuel tester, and a protractor. The FBI seizes all the items when they are notified on September 12 (except the binder of notes, which the owner apparently threw away). (Davies 9/16/2001; Wilson 9/16/2001)

In an apartment rented by Ziad Jarrah and Ahmed Alhaznawi, the FBI finds a notebook, videotape, and photocopies of their passports. (Viglucci and Garcia 9/15/2001)

In a bar the night before 9/11, after making predictions of a attack on America the next day, the hijackers leave a business card and a copy of the Koran at the bar. The FBI also recovers the credit card receipts from when they paid for their drinks and lap dances. (Associated Press 9/14/2001)

A September 13 security sweep of Boston airport’s parking garage uncovers items left behind by the hijackers: a box cutter, a pamphlet written in Arabic, and a credit card. (Gugliotta 9/16/2001)

A FedEx bill is found in a trash can at the Comfort Inn in Portland, Maine, where Atta stayed the night before 9/11. The bill leads to Dubai, United Arab Emirates, allowing investigators to determine much of the funding for 9/11. (Klaidman and Hosenball 11/11/2001; McGrory 12/1/2001)

A bag hijackers Alhazmi and Almihdhar left at a mosque in Laurel, Maryland, is found on September 12. The bag contains flight logs and even receipts from flight schools from San Diego the year before (see September 9, 2001).

On 9/11, in a Days Inn hotel room in Newark, New Jersey, investigators find used plane tickets for Saeed Alghamdi, Ahmed Alhaznawi, Ziad Jarrah, and Ahmed Alnami. The tickets are all from a Spirit Continental Airlines flight from Ft. Lauderdale, Florida, to Newark on September 7. Also, flight manuals for Boeing 757 and 767 airplanes are found in English and Arabic. (Investigative Services Division, FBI Headquarters 4/19/2002)
The hijackers past whereabouts can even be tracked by their pizza purchases. An expert points out: “Most people pay cash for pizza. These [hijackers] paid with a credit card. That was an odd thing.” (Bigelow 9/3/2002) “In the end, they left a curiously obvious trail—from martial arts manuals, maps, a Koran, Internet and credit card fingerprints. Maybe they were sloppy, maybe they did not care, maybe it was a gesture of contempt of a culture they considered weak and corrupt.” (Morgan, Kidwell, and Corral 9/22/2001) The New Yorker quotes a former high-level intelligence official as saying: “Whatever trail was left was left deliberately—for the FBI to chase” (see Late September 2001). (Hersh 10/8/2001)

September 12, 2001 and After: Phone Number in 9/11 Hijacker’s Car Points to Suspicious Associate in San Diego

On September 12, 2001, 9/11 hijacker Nawaf Alhazmi’s 1988 Toyota Corolla is found at a parking lot near Washington, DC. Alhazmi and fellow hijacker Khalid Almihdhar bought the car in San Diego in March 2000 (see March 25, 2000). (Lichtblau and Meyer 9/27/2001) Various items are found in the car (see September 11-13, 2001), including an old telephone number of Osama Awadallah. Alhazmi knew Awadallah when he lived in San Diego in 2000. Awadallah’s San Diego house is searched soon thereafter, and photos, videos, and articles relating to Osama bin Laden are found. Investigators also discover that copies of bin Laden’s fatwas (religious edicts) and other similar materials were distributed by people living in the house. (9/11 Commission 7/24/2004, pp. 219-220) Awadallah worked with Alhazmi at a San Diego gas station with a number of radical Islamists (see Autumn 2000). A witness claims that one day before 9/11, he seemed to be celebrating the upcoming 9/11 attacks at the gas station, telling co-workers, “it is finally going to happen” (see Late August-September 10, 2001). Authorities will never develop enough evidence to charge Awadallah with any serious crime, and he will be deported in 2006 after a long legal battle (see May 4, 2006).

Osama Awadallah, an alleged associate of two 9/11 hijackers in San Diego, is acquitted in a US trial. Awadallah, a Jordanian living in the US since 1999, was not accused of terrorist activity, but was merely charged with lying to a grand jury investigating the 9/11 attacks. Nine days after 9/11, he was interviewed by the FBI, and he admitted that he knew 9/11 hijacker Nawaf Alhazmi. However, he denied knowing hijacker Khalid Almihdhar, who lived with Alhazmi in San Diego. Awadallah was detained as a material witness. After 9/11, his old phone number was found in a car used by some of the hijackers. Eleven jurors wanted to convict him, but one did not, so a mistrial was declared after jurors made clear they could not reach a unanimous verdict. Had he been convicted, he would have faced little to no jail time, and then deportation. Instead, he will continue his studies at San Diego State University. (Associated Press 5/5/2006) It has been claimed that one day before the 9/11 attacks, Awadallah and others appeared to be celebrating the upcoming attacks (see Late August-September 10, 2001).