This page can be viewed at http://www.historycommons.org/entity.jsp?entity=p._patrick_leahy_1

P. Patrick Leahy was a participant or observer in the following events: 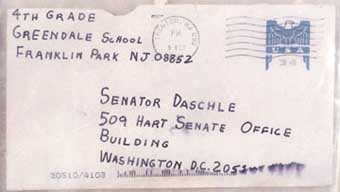 The envelope to the Tom Daschle letter. [Source: FBI]Two Democratic senators are targets of the 2001 anthrax attacks (see October 5-November 21, 2001). On this day, Senator Tom Daschle’s office opens a letter mailed October 9, containing a lethal dose of anthrax (see October 6-9, 2001). A similar letter to Senator Patrick Leahy mailed the same day and from the same location is misrouted to Virginia on October 12, and is not discovered until November 17. Neither Leahy nor Daschle come into contact with the anthrax, but some of Daschle’s staffers do. (South Florida Sun-Sentinel 12/8/2001)

December 13, 2006: USGS to Screen All Documents by Agency Scientists of a ‘Policy-Sensitive Nature’

The US Geological Survey establishes new rules requiring the screening of all facts and interpretations by agency scientists. The rules say that the USGS’s communications office must be “alerted about information products containing high-visibility topics or topics of a policy-sensitive nature.” Such “products” include all public documents, even minor reports or prepared talks. P. Patrick Leahy, USGS’s head of geology and its acting director, insists the new requirements are being implemented to improve scientists’ accountability, maintain their neutrality, and “harmonize” the review process. Jim Estes, an internationally recognized marine biologist in the USGS field station at Santa Cruz, Calif, disagrees. “I feel as though we’ve got someone looking over our shoulder at every damn thing we do,” he says, adding that he thinks the motivation behind the new rules is “to keep us under their thumbs. It seems like they’re afraid of science. Our findings could be embarrassing to the administration.” (Heilprin 12/13/2006)