This page can be viewed at http://www.historycommons.org/entity.jsp?entity=pat_mahoney_1

Pat Mahoney was a participant or observer in the following events: 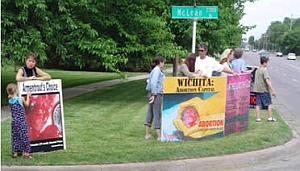 Anti-abortion protesters gather on a street corner in Wichita. [Source: Patriotic Thunder (.org)]Anti-abortion organization Operation Rescue (see 1986), under the new leadership of the Reverend Keith Tucci, conducts a seven-week occupation of three women’s clinics in Wichita, Kansas. Some 2,700 activists and protesters are arrested during the course of events. (Associated Press 7/5/1993; Kushner 2003, pp. 38-39) The occupation is part of what the organization calls the “Summer of Mercy,” which involves a series of clinic blockades, occupations, and harassment of abortion providers, clinic staff, and patients. The event lasts six weeks, and culminates in a rally that fills Wichita’s Cessna Stadium and features conservative Christian activist Dr. James Dobson. One of the clinics targeted is operated by Dr. George Tiller; Tiller will be shot by an anti-abortion activist in 1993 (see August 19, 1993) and murdered by another in 2009 (see May 31, 2009). (Associated Press 7/5/1993) Some of the Operation Rescue members arrested face charges for attacking police officers trying to keep order at the clinics. Tucci and two other anti-abortion organization leaders, the Reverends Pat Mahoney and Joe Slovenec, are jailed until they agree to comply with Judge Patrick Kelly’s order not to blockade the clinics. Two other Operation Rescue leaders, Randall Terry and Michael McMonagle, are ordered along with Tucci, Mahoney, and Slovenec to leave Wichita; when they refuse to comply with Kelly’s initial order to stop the blockades after agreeing to it, Kelly observes, “You are learning for the first time, I think, that you can’t trust a damned thing they say.” Mahoney retorts, “Hell will freeze over before I surrender my constitutional rights.” He, Tucci, and Slovenec promise to return to Wichita despite the court orders and again protest at the clinics. (Associated Press 8/31/1991; Associated Press 7/5/1993) The Bush administration attempts to derail Kelly’s curbing of the anti-abortion activities; the Justice Department files a “friend of the court” brief challenging Kelly’s jurisdiction in the case. “The position we have taken before the Supreme Court of the United States is that the courts do not have jurisdiction, that it is a matter properly handled in state and local courts,” says Attorney General Richard Thornburgh. (Spencer 8/9/1991)