This page can be viewed at http://www.historycommons.org/entity.jsp?entity=patrick_lamar_1

Patrick Lamar was a participant or observer in the following events: 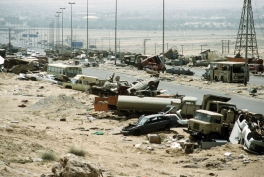 Demolished and disabled vehicles litter the ‘Highway of Death’ in the hours after Iraqi forces were slaughtered by US strikes. [Source: Public domain / US Department of Defense]Thousands of Iraqi soldiers retreating on two highways from Kuwait City, Kuwait, towards Basra, Iraq, are slaughtered by US forces on what is later called the “Highway of Death.” (PBS Frontline 1/9/1996) The so-called “Battle of Rumaylah,” or as some call it, the “Battle of the Junkyard,” is not a battle in the classic sense, as the huge losses of Iraqi soldiers and vehicles are contrasted with the loss of a single American tank, lost when an Iraqi tank explodes too close to it. Only one US soldier is injured. In the two separate but connected US assaults that make up the battle, at least 600 Iraqi tanks, armored vehicles, and trucks are destroyed or disabled; estimates of Iraqi personnel losses vary widely, but the losses are well in the thousands. Iraqi, Kuwaiti, and Palestinian civilians, including children, are caught in the heavy US assault as well as innumerable Iraqi soldiers. (Some believe the Kuwaitis and Palestinians were being taken to Baghdad to be used as hostages.) Most of the bodies are buried within hours, making it impossible to ascertain the number of dead. During the US assault, US tanks, using sophisticated thermal-imaging targeting, have little trouble sighting and destroying Iraqi tanks before the Iraqi units are even aware that they are being fired upon. (Time 3/18/1991; Hersh 5/22/2000; Newsweek 5/29/2000)
Air Strikes - Initially, a force of retreating Iraqi armored units are bombed front and rear by US aircraft during the night of February 27-28, trapping the convoy between the centers of destruction. The remaining units are targets for later air strikes. Most of the vehicles—military tanks, trucks, and armored personnel carriers, as well as civilian cars and trucks—are destroyed.
Five-Hour Air, Armor Assault - The March 2 attack on the Iraqi Republican Guard “Hammurabi” tank division is ordered by Army General Barry McCaffrey (the general who commanded the already-famous “left hook” maneuver days before—see February 23, 1991 and After), in response to what McCaffrey says is an attack on his forces with rocket-propelled grenades (RPGs). The decision surprises some in the Allied command structure in Saudi Arabia and causes unease among civilian and military leaders in Washington, who worry about the public relations ramifications of an attack that comes days after a cease-fire was implemented (see February 28, 1991). McCaffrey himself later calls the attack “one of the most astounding scenes of destruction I have ever participated in.” The “Hammurabi” division is obliterated in the assault.
Criticism from Fellow Officers - Some senior US officers are not sure that McCaffrey’s unit, the 24th Mechanized Division, was in fact attacked; many senior US officers privately assert that McCaffrey’s five-hour assault was well out of proportion. (McCaffrey, later accused of war crimes by an anonymous but well-informed accuser, will be exonerated by an Army inquiry.) McCaffrey will assert that his troops were indeed attacked—an assertion backed by other field officers on the scene—and that he ordered the retaliation because had he not, his forces would have come under heavy attack by Iraqi armored units. Besides, McCaffrey will later say, the entire war was intended to be a one-sided affair: “We didn’t go up there looking for a fair fight with these people.” The whole war, one British commander said in earlier weeks, was “rather like a grouse shoot.” (Hersh 5/22/2000; Newsweek 5/29/2000)

One critic is the commander of the Army’s 82nd Airborne Unit, Lieutenant General James Johnson, who will later say: “There was no need to be shooting at anybody. [The Iraqis] couldn’t surrender fast enough. The war was over.” Johnson, whose unit is deployed near McCaffrey’s, will add, “I saw no need to continue any further attacks.” Explaining why McCaffrey ordered the assault on his own authority, Johnson will say that McCaffrey—widely perceived as CENTCOM commander General Norman Schwarzkopf’s favorite general—“does what he wants to do.”

Lieutenant General Ronald Griffith, commanding the 1st Armored Division of VII Corps, will later say that many of the tanks destroyed in the assault were being transported on trailer trucks to Baghdad, with their cannons facing away from the US troops, and thus posing no threat. “It was just a bunch of tanks in a train, and he made it a battle,” Griffith will later say of McCaffrey. “He made it a battle when it was never one. That’s the thing that bothered me the most.”

Major James Kump, the senior intelligence officer for the Army’s 124th Military Intelligence Battalion, is monitoring what he believes to be a routine retreat before McCaffrey’s units begin attacking the Iraqi forces. Kump will later recall: “I thought, I can’t believe what I’m hearing! There’s nothing going on. These guys are retreating.” Kump receives a large amount of electronic data indicating that McCaffrey is attacking a retreating force. “I had links to several intelligence systems—more than I can talk about,” he will later say. “And I’d have known if troops were moving toward us.… I knew of no justification for the counterattack. I always felt it was a violation of the ceasefire. From an integrity standpoint, I was very troubled.”

McCaffrey’s orders will be questioned even by one of his own subordinates, Lieutenant Colonel Patrick Lamar, the 24th’s operations officer. Lamar, who is in charge of the assault command post and who relays McCaffrey’s orders to the field units, will later say: “There was no incoming. I know that for a fact.” The battle is “a giant hoax. The Iraqis were doing absolutely nothing. I told McCaffrey I was having trouble confirming the incoming.” But, Lamar will recall, nothing he says matters. McCaffrey wants to attack.

Private First Class Charles Sheehan-Miles, a gun loader in a 1st Brigade tank platoon, will later recall being sent to rescue an American unit under attack by Iraqi armored units. “We went up the road blowing the sh_t out of everything,” he will recall. “It was like going down an American highway—people were all mixed up in cars and trucks. People got out of their cars and ran away. We shot them.” Sheehan-Miles recalls shooting at least one person in civilian clothing. “My orders were to shoot if they were armed or running. The Iraqis were getting massacred.”

Specialist 4 James Manchester, a member of the Scout platoon of the 27th Battalion of the 1st Brigade, will later call the battle nothing more than “f_cking murder.”

After the battle, military analysts will pore over the battle films recorded by the Apache attack helicopters participating in McCaffrey’s assault. One of the analysts will later tell a reporter that the footage was clear: the Iraqi tanks were in full retreat and posed no threat to American forces. “These guys were in an offroad defensive position—deployed in a perimeter,” the analyst will recall. Some of the Iraqi tanks attempted to return fire once McCaffrey began his assault: “We saw T-72s in battle lines, firing away blindly in the air. They didn’t know what was killing them, but they were gamely shooting—knowing they would die.”
Many officers on the ground will later describe actions by McCaffrey and some of his senior subordinates they believe are designed to provoke a response from the retreating Iraqis and thus provide an excuse to begin a counterattack.
Massacre Factor in Decision to End Hostilities - Reporters are not allowed in the area, so no one is there to report on, or photograph, the actual assault or its immediate aftermath. But the area is heavily photographed in the following days, and the swath of destroyed, burned-out vehicles becomes at once a symbol of US military superiority and of Iraqi defeat. It is later cited as one of the factors in President Bush’s decision to accept Iraq’s surrender and cease hostilities. The decision enables the Iraqi Army to survive the war somewhat intact, and keeps Saddam Hussein in power. Bush will later explain: “If we continued the fighting another day… would we be accused of a slaughter of Iraqis who were simply trying to escape, not fight? In addition, the coalition was agreed on driving the Iraqis from Kuwait, not on carrying the conflict into Iraq or on destroying Iraqi forces.”
Dehumanizing the Iraqis - Manchester will later tell a reporter: “I was as patriotic as they come. I was a gung-ho ass-kicking Commie-hating patriotic son of a b_tch. I hated the Arabs. We all did. I dehumanized them. Did the Iraqis commit war crimes in Kuwait? Did they retreat back into Iraq to commit war crimes against their own people? The answer is yes to both questions. But does that make March 2nd justified? There have to be limits, even in war. Otherwise, the whole system breaks down.” (Hersh 5/22/2000)