This page can be viewed at http://www.historycommons.org/entity.jsp?entity=patty_casazza_1

Patty Casazza was a participant or observer in the following events: 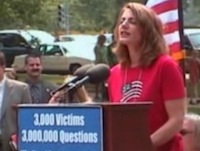 9/11 Family Member Mindy Kleinberg speaks at the rally. [Source: 9/11: Press For Truth]Four family members of 9/11 victims collectively known as the “Jersey Girls” come to Congress to ask for an independent inquiry into the attacks. “It’s not about politics,” says one of the four, Kristen Breitweiser, as she sits in the office of Tim Roemer (D-IN), a member of the House Intelligence Committee. “It’s about doing the right thing. It’s about the safety of the nation.” President Bush has resisted the creation of an outside body, saying Congress can handle the job and suggesting that an additional investigation might interfere with national security. The Jersey Girls’ “march through… the halls of Congress,” as it is termed by the New York Times, is augmented by a rally held in Washington and attended by four busloads of relatives, friends, and supporters of the 9/11 victims. The Times reports that the Jersey Girls and other speakers at the rally say their call for an independent investigation is “nonpolitical and a matter of grave national concern.” Ellen Mariani of New Hampshire, whose husband was on the second plane to hit the World Trade Center, agrees with the Jersey Girls that an investigation is necessary. “I want a real investigation,” she says. “I don’t want lip service. I’m angry, and I’m not going away.” Jersey Girl Mindy Kleinberg, who like Mariani lost her husband in the attacks, says: “I want to be able to look into the eyes of my children, and tell them the evil is over there, that they are safe and that their country is secure. Nine months have passed and I still cannot do that. I do not have answers.” The four Jersey Girls—Breitweiser, Kleinberg, Lori Van Auken, and Patty Casazza—say they began working together about two months ago when they met one another in a local bereavement group. They say they were inspired by the example of Bob Monetti, who lost his son in the crash of Pan Am Flight 103 over Lockerbie, Scotland. Of Monetti, Van Auken remarks: “He said: ‘You’re not getting any answers. It’s time for a rally.’ We had no idea what we were doing, but we didn’t think we couldn’t do it.” Casazza says that in the last few months, they have become heavily involved in Washington politics. She says: “I hate to admit it, but before September 11, I understood politics vicariously through my husband. I have a new appreciation for the way Washington works.” Casazza says she worries about her son, who is home in the care of a babysitter. “I just want to feel safe again,” she says. (New York Times 6/12/2002)

Relatives of some of the victims of the 9/11 attacks call on the CIA to release a report drafted by its inspector general into some aspects of the agency’s failings before 9/11. The report was completed in 2004 (see June-November 2004), and rewritten in 2005 (see January 7, 2005), but was not then released (see October 10, 2005). The call is backed by 15,000 signatures on a petition calling for the release. The victims’ relatives, Patty Casazza, Monica Gabrielle, Mindy Kleinberg, and Lorie Van Auken, say the report “is the only major 9/11 government review that has still not been made publicly available,” and quote Newsweek journalist Michael Isikoff saying that the main reason for the report’s non-release is “a desire to protect the reputations of some of the main figures [named in the report].” (Raw Story 6/18/2007) This coincides with efforts by lawmakers to get part of the report published (see Spring-Summer 2007) and is eventually partially successful (see August 21, 2007).