This page can be viewed at http://www.historycommons.org/entity.jsp?entity=paul_eaton_1

Paul Eaton was a participant or observer in the following events:

Major General Paul Eaton, who retired last month after being in charge of training new Iraqi military personnel, says the Bush administration’s strategy to use those new Iraqi troops to replace departing American troops was crippled from the beginning. Eaton says that the replacement program was never given the planning, funding, or staffing it needed to progress. The first year of the occupation was a critical time, Eaton says, and the US and Iraqi military might be much closer to President Bush’s goal of Iraqi forces “standing up” as US forces “stand down” had so much of that first year not been lost. Former military officials interviewed by the New York Times agree with Eaton’s assessment, as do a number of civilian officials involved in US operations in Iraq at the time. Eaton was replaced as the senior US official in charge of training Iraqi troops by Lieutenant General David Petraeus. Eaton began his yearlong stint on May 9, 2003, and now recalls: “I was very surprised to receive a mission so vital to our exit strategy so late. I would have expected this to have been done well before troops crossed the line of departure. That was my first reaction: ‘We’re a little late here.’” Eaton was told that training Iraqi troops was fifth on the priority list for Iraqi security forces, behind a civil defense corps, police, border guards, and guards for government and commercial facilities. “We set out to man, train, and equip an army for a country of 25 million—with six men,” Eaton recalls. He worked into the fall of 2003 with what he calls “a revolving door of individual loaned talent that would spend between two weeks and two months.” He never received even half of the 250 professional staff members he was promised. Between the chaos that ensued immediately after the overthrow of Saddam Hussein, the decision by Coalition Provisional Agency head L. Paul Bremer to dissolve the Iraqi army (see May 23, 2003), and the insurgency that arose shortly thereafter, Eaton and his small staff were never able to build the army they had hoped. Perhaps the worst blow was the wholesale dissolution of the Iraqi army. This left Eaton to train an entire military force essentially from scratch, without any Iraqi noncommissioned officers. New York Times reporter Thom Shanker observes, “Training an army without noncommissioned officers to serve as drill sergeants is like pitching a tent without poles.” (Shanker 2/11/2006) 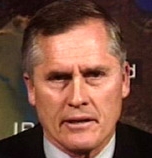 David Grange. [Source: CNN]CNN airs commentary from three of its “independent military analysts,” some of whom will later be cited as participants in the Pentagon’s Iraq propaganda operation (see April 20, 2008 and Early 2002 and Beyond). The analysts are retired Army Brigadier General James “Spider” Marks (whom CNN will later fire for conflicts of interest—see July 2007), retired Air Force Major General Donald Shepperd, and retired US Army Brigadier General David Grange. The topic is Defense Secretary Donald Rumsfeld and whether he should resign. After Marks confirms that Rumsfeld repeatedly refused requests from field commanders to send more troops into Iraq during critical battlefield moments (see April 16, 2006), CNN anchor Wolf Blitzer raises the issue of other retired generals calling for Rumsfeld’s resignation.
Grange - Grange dismisses the resignation demands as coming from “a small number of general officers…” Grange says he does not have a close relationship with Rumsfeld, but admits that he participates in “occasional” briefings with Rumsfeld and Pentagon officials. Grange says “it would be inappropriate [for Rumsfeld] to step down right now,” and adds that it really isn’t the generals’ business to make any such recommendations.
Shepperd - Blitzer plays the commentary of retired Army Major General Paul Eaton, who blames Rumsfeld for not putting “enough boots on the ground to prosecute” the Iraq war and has also called for Rumsfeld’s resignation, then asks Shepperd for his commentary. Shepperd, one of the most reliable of the Pentagon’s “independent analysts” (see June 24-25, 2005), says while Rumsfeld made some “misjudgments,” he should not resign. Like Grange, he questions the “propriety” of the retired generals’ speaking out on the subject. “It steps over, in my opinion, the line of the role of military general officers, active or retired, calling for the resignation of a duly appointed representative of the government by a duly elected government. That’s the problem I have with all of this. And it’s hard to have a rational discussion because you quickly get into, is the war going well or not, do we or do we not have enough troops, when the question is one of propriety about these statements.”
Marks - Marks adds his voice to the chorus, saying that “it’s not the place of retired general officers or anyone to make that statement.…[T]he country’s at war. You need to rally around those doing their best to prosecute it.” Though Marks stands with both Grange and Shepperd in defending Rumsfeld from calls for his resignation, he does note that he retired from the Army in part because of Rumsfeld’s cavalier treatment of two of his close friends, retired General Eric Shinseki (see February 25, 2003 and February 27, 2003) and General David McKiernan. (CNN 4/16/2006)

Retired Major General Paul Eaton, one of the 16 retired flag officers who joined President Obama in Obama’s signing of his executive order banning torture (see January 22, 2009), says that the Abu Ghraib scandal “immediately undermined me, my moral authority” as he worked in Iraq with eight other nations to build up Iraqi security forces. “It created a far more dangerous environment for every soldier, every marine we had in Iraq,” Eaton says. Eaton places direct blame for Abu Ghraib on the Bush administration’s push for enhanced interrogation techniques. (Woolner 1/23/2009)

White House counsel Greg Craig says that the executive orders given by President Obama in his first days in office, particularly those outlawing torture (see January 22, 2009) and closing Guantanamo (see January 22, 2009) have been in the works for over a year. Craig also notes that Obama has not finished issuing reforms, and has deliberately put off grappling with several of the most thorny legal issues. Craig says that as Obama prepared to issue the orders, he was “very clear in his own mind about what he wanted to accomplish, and what he wanted to leave open for further consultation with experts.”
Process Began before First Presidential Caucus - Craig says that the thinking and discussion behind these orders, and orders which have yet to be issued, began in Iowa in January 2008, before the first presidential caucus. Obama met with former high-ranking military officers who opposed the Bush administration’s legalization of harsh interrogation tactics, including retired four-star generals Dave Maddox and Joseph Hoar. They were sickened at the abuses committed at Abu Ghraib prison, and, as reporter Jane Mayer writes, “disheartened by what they regarded as the illegal and dangerous degradation of military standards.” They had formed what Mayer calls “an unlikely alliance with the legal advocacy group Human Rights First, and had begun lobbying the candidates of both parties to close the loopholes that Bush had opened for torture.” The retired flag officers lectured Obama on the responsibilities of being commander in chief, and warned the candidate that everything he said would be taken as an order by military personnel. As Mayer writes, “Any wiggle room for abusive interrogations, they emphasized, would be construed as permission.” Craig describes the meeting as the beginning of “an education process.”
'Joy' that US is 'Getting Back on Track' - In December 2008, after Obama’s election, the same group of retired flag officers met with Craig and Attorney General-designate Eric Holder. Both Craig and Holder were impressed with arguments made by retired Marine general and conservative Republican Charles Krulak, who argued that ending the Bush administration’s coercive interrogation and detention regime was “right for America and right for the world.” Krulak promised that if the Obama administration would do what he calls “the right thing,” which he acknowledged will not be politically easy, that he would personally “fly cover” for it. Sixteen of those flag officers joined Obama for the signing of the executive order banning torture. After the signing, Obama met with the officers and several administration officials. “It was hugely important to the president to have the input from these military people,” Craig says, “not only because of their proven concern for protecting the American people—they’d dedicated their lives to it—but also because some had their own experience they could speak from.” During that meeting, retired Major General Paul Eaton called torture “the tool of the lazy, the stupid, and the pseudo-tough. It’s also perhaps the greatest recruiting tool that the terrorists have.” Retired Admiral John Hutson said after the meeting that the feeling in the room “was joy, perhaps, that the country was getting back on track.”
Uncertainty at CIA - Some CIA officials are less enthusiastic about Obama’s changes. They insist that their so-called “enhanced interrogation techniques” have provided critical intelligence, and, as Craig says, “They disagree in some respect” with Obama’s position. Many CIA officials wonder if they will be forced to follow the same interrogation rules as the military. Obama has indeed stopped torture, Craig says, but the president “is somewhat sympathetic to the spies’ argument that their mission and circumstances are different.” Craig says that during the campaign, Obama’s legal, intelligence, and national security advisers visited CIA headquarters in Langley for two intensive briefings with current and former intelligence officials. The issue of “enhanced interrogation tactics” was discussed, and the advisers asked the intelligence veterans to perform a cost-benefit analysis of such tactics. Craig says, “There was unanimity among Obama’s expert advisers that to change the practices would not in any material way affect the collection of intelligence.” (Meyer 1/25/2009)