This page can be viewed at http://www.historycommons.org/entity.jsp?entity=paul_ice_1

Paul Douglas Ice was a participant or observer in the following events:

A federal grand jury indicts Oklahoma City bombers Timothy McVeigh and Terry Nichols (see 8:35 a.m. - 9:02 a.m. April 19, 1995) on 11 counts of murder and conspiracy. Neither McVeigh nor Nichols are present during the hearing. The grand jury is only empowered to bring federal charges; the eight murder charges are in regards to the eight federal agents slain in the bombing: Secret Service agents Mickey Maroney, Donald Leonard, Alan Whicher, and Cynthia Campbell-Brown; DEA agent Kenneth McCullough; Customs Service agents Paul Ice and Claude Madearis; and Paul Broxterman, an agent in the Office of the Inspector General at the Department of Housing and Urban Development. Both Nichols and McVeigh are expected to face 160 counts of murder brought by the state of Oklahoma; both will plead not guilty to all counts of the indictment (see August 15, 1995). The indictment levels the following charges:

on October 1, 1994, McVeigh and Nichols stole explosives from a storage locker in Marion, Kansas (the actual date of the theft is October 3—see October 3, 1994);

on October 3-4, 1994, McVeigh and Nichols transported the stolen explosives to Kingman, Arizona, and stored them in a rented storage unit (see October 4 - Late October, 1994);

in October 1994, McVeigh and Nichols planned the robbery of a firearms dealer in Arkansas as a means to finance the bombing, and on November 5 they “caused” firearms, ammunition, coins, cash, precious metals, and other items to be stolen from gun dealer Roger Moore (see November 5, 1994);

on December 16, 1994, McVeigh drove with Michael Fortier to Oklahoma City and identified the Murrah Federal Building as the target of the upcoming bombing (see December 16, 1994 and After);

on April 14, 1995, McVeigh bought a 1977 Mercury Marquis in Junction City, Kansas, called Nichols in Herington, Kansas, used the “Kling” alias to set up the rental of a Ryder truck capable of transporting 5,000 pounds of cargo, and rented a room in Junction City (see April 13, 1995);

on April 19, 1995, McVeigh parked the truck bomb directly outside the Murrah Building during regular business hours; and

on April 19, 1995, McVeigh “caused the truck bomb to explode” (see 8:35 a.m. - 9:02 a.m. April 19, 1995).
The indictment accuses McVeigh and Nichols of plotting the bombing “with others unknown to the Grand Jury.” It does not mention the person identified earlier as “John Doe No. 2” (see June 14, 1995). The grand jury says it is confident others, as yet unidentified, also participated in the plot. Lead prosecutor Joseph Hartzler says: “The indictment mentions unknown co-conspirators. We will try to determine if there are others who aided and abetted this crime.” After the indictments are handed down, Attorney General Janet Reno says: “We will pursue every lead based on the evidence.… [M]ost of these leads have been pursued and exhausted.… [W]e have charged everyone involved that we have evidence of at this point.” Prosecutors say that while others may well have been involved, the plot was closely held between McVeigh and Nichols. US Attorney Patrick Ryan has already announced he will seek the death penalty against both McVeigh and Nichols (see July 11-13, 1995), a decision supported by Reno (see 4:00 p.m., April 19, 1995). A third conspirator, Michael Fortier, has pled guilty to lesser crimes regarding his involvement; Fortier has testified against McVeigh and Nichols in return for the lesser charges (see May 19, 1995 and August 8, 1995), and defense lawyers are expected to assail Fortier’s credibility during the trials (see April 19, 1995 and After, April 23 - May 6, 1995, and May 8, 1995). Nichols’s lawyer Michael Tigar says, “Terry Nichols is not guilty of the allegations of which he is charged,” calls the case against his client “flimsy” and “irresponsible,” and accuses prosecutors of attempting to try his client “in the national media.” Periodically, Tigar holds up hand-lettered signs reading, among other messages, “Terry Nichols Wasn’t There” and “A Fair Trial in a Fair Forum.” Prosecutors have dropped all charges against Nichols’s brother James Nichols, who was indicted on three related explosive charges (see December 22 or 23, 1988, April 25, 1995, and May 11, 1995). US Attorney Saul A. Green says that “additional investigation failed to corroborate some of the important evidence on which the government initially relied.” (Thomas and Lardner 8/11/1995; Kifner 8/11/1995; Stickney 1996, pp. 189-191; Mickolus and Simmons 6/1997, pp. 811; Romano and Kenworthy 12/24/1997; Serrano 1998, pp. 245; Douglas O. Linder 2001) McVeigh’s lawyer, Stephen Jones, tells reporters after the hearing that he has been in contact with a man who, he says, told the government early in the fall of 1994 of plans to blow up federal buildings. This man, Jones says, was given a “letter of immunity” by the authorities in exchange for information involving a trip he had taken to Kingman, Arizona, Fortier’s hometown, and for information about his discussions with potential bombers whom, Jones says, the man had described as either “Latin American or Arab.” Jones refuses to identify the person to whom he is referring. (Kifner 8/11/1995) 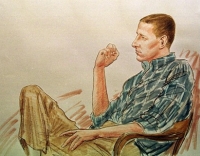 Timothy McVeigh sits in the courtroom during his trial. [Source: India Times]Accused Oklahoma City bomber Timothy McVeigh (see 8:35 a.m. - 9:02 a.m. April 19, 1995 and August 10, 1995) is convicted on all 11 counts of murder and conspiracy. (University of Missouri-Kansas City School of Law 6/2/1997; Douglas O. Linder 2001) The jury deliberates for over 23 hours, spread over four days (including a weekend), before announcing it has a verdict. McVeigh, who enters the courtroom with a smile on his face, shows no emotion when the guilty verdicts are read aloud by US District Judge Richard Matsch; Matsch polls the 12 jurors to ensure that they are indeed unanimous in their verdict. McVeigh is convicted of first-degree murder in the deaths of eight law enforcement agents who died in the blast, one count of conspiracy to use a weapon of mass destruction, one count of using a weapon of mass destruction, and one count of destruction of a federal building. McVeigh awaits a trial in Oklahoma, where he will face 160 counts of murdering the civilians who died in the bombing; Oklahoma City district attorney Bob Macy says he will file state charges that will bring both McVeigh and fellow conspirator Terry Nichols to court to face the death penalty. Many family members break down in tears as the verdicts are read; one woman shouts, “We got him!” Lead prosecutor Joseph Hartzler accepts an ovation from the gallery, and later says: “We’re obviously very pleased with the verdict. We always had confidence in our evidence. Now maybe everyone else will have confidence in our evidence.” Defense attorney Stephen Jones says he will prepare his client for the sentencing phase, where many feel McVeigh will be sentenced to death (see June 11-13, 1997). (Both sets of attorneys are under a judicial gag order preventing them from discussing the details of the case.) Jannie Coverdale, who lost her grandchildren in the blast, says she has mixed emotions: “This is bittersweet. After all, this is a young man who has wasted his life. I’m glad they found him guilty, but I’m sad for him, too. I feel sorry for him. He had so much to offer his country.… I want him to get the death penalty, but not out of revenge. It’s necessary. I haven’t seen any remorse from Timothy McVeigh. If he ever walked the streets, he would murder again. I don’t want to see that.” Asked if the verdict will bring her closure, she says: “I don’t think there will ever be closure. Too many people are missing.” Sharon Ice, whose brother Paul Douglas Ice was one of the federal agents killed in the bombing, calls McVeigh a “monster.” Former judge Durant Davidson says he supports the verdict: “I don’t have any question about that. There was a time before the trial started that I didn’t know. [But] after having followed it, there would not have been any question in my mind.” In Washington, President Clinton refuses to comment directly on the verdict, citing the judge’s gag order, but says: “This is a very important and long overdue day for the survivors and families of those who died in Oklahoma City.… I say to the families of the victims, no single verdict can bring an end to your anguish. But your courage has been an inspiration to all Americans. Our prayers are with you.” (Eddy et al. 6/3/1997; Thomas 6/3/1997; Romano and Kenworthy 6/3/1997; Associated Press 1/11/1998) McVeigh’s father William and his sister Jennifer release a statement from their Pendleton, New York, home that reads in part: “Even though the jury has found Tim guilty, we still love him very much and intend to stand by him no matter what happens. We would like to ask everyone to pray for Tim in this difficult time.” (Romano and Kenworthy 6/3/1997) Later, a juror says he and his fellows grew more convinced of McVeigh’s guilt with each day that the trial continued. “There is no justification for that kind of action,” juror Tony Stedman will say. (Associated Press 1/11/1998) As the prosecution leaves the courthouse, a weeping woman pushes her way towards lead attorney Joseph Hartzler, throws her arms around him, and says, “Dear God, thank you for what you have done.” (Serrano 1998, pp. 292)