This page can be viewed at http://www.historycommons.org/entity.jsp?entity=peter_beinert_1

Peter Beinert was a participant or observer in the following events: 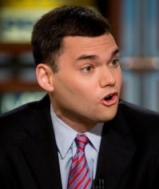 Peter Beinert. [Source: ViewImages.com]New Republic editor Peter Beinert, described by PBS host Bill Moyers as a “liberal hawk,” recalls his experience as one of the television news shows’ “hottest young pundits” in the months before the war. Beinert accused opponents of the war of being “intellectually incoherent,” and echoed administration talking points about Iraqi nuclear weapons. In an interview, Moyers asks Beinert, “Had you been to Iraq?” Beinert answers, “No,” and Moyers asks, “So what made you present yourself, if you did, as a Middle East expert?” Beinert responds: “I don’t think that I presented myself as a Middle East expert per se. I was a political journalist. I was a columnist writing about all kinds of things. Someone in my position is not a Middle East expert in the way that somebody who studies this at a university is, or even at a think tank. But I consumed that stuff. I was relying on people who did that kind of reporting and people who had been in the government who had access to classified material for their assessment.” Beinert confirms that most of his information came from government and government-associated sources, and from other reporters and columnists, and almost by necessity, his commentary was much more reflective of government and pro-war viewpoints than it should have been: “Where I think I was tragically wrong was not to see in February, March 2003 after we got the inspectors back in on the ground and we began to learn much more about what had been going on in Iraq than we had known in 2002 when we had no one on the ground that that assumption was being proven wrong.… I think the war has been a tragic disaster. I mean, the Americans killed, the Iraqis killed. It’s true, life under Saddam was hell. But can one really say that life for Iraqis is better today?” (Moyers 4/25/2007)