This page can be viewed at http://www.historycommons.org/entity.jsp?entity=peter_hanson

Peter Hanson was a participant or observer in the following events: 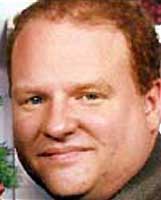 Peter Hanson. [Source: Family photo]Businessman Peter Hanson calls his father from Flight 175 and says, “Oh, my God! They just stabbed the airline hostess. I think the airline is being hijacked.” Despite being cut off twice, he manages to report how men armed with knives are stabbing flight attendants, apparently in an attempt to force crewmembers to unlock the doors to the cockpit. He calls again a couple of minutes before the plane crashes. (BBC 9/13/2001; Alderson et al. 9/16/2001; Mandel 9/16/2001) Hanson’s father immediately calls the local police department and relays what he heard. (San Francisco Chronicle 7/23/2004)

Flight 175 passenger Peter Hanson calls his parents a second time, and says to his father, “It’s getting bad, Dad—A stewardess was stabbed—They seem to have knives and Mace—They said they have a bomb—It’s getting very bad on the plane—Passengers are throwing up and getting sick—The plane is making jerky movements—I don’t think the pilot is flying the plane—I think we are going down—I think they intend to go to Chicago or someplace and fly into a building—don’t worry, Dad—If it happens, it’ll be very fast—My God, my God.” (San Francisco Chronicle 7/23/2004)