This page can be viewed at http://www.historycommons.org/entity.jsp?entity=peter_margulies_1

Peter Margulies was a participant or observer in the following events: 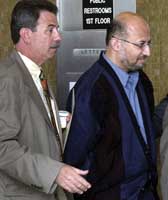 Sami al-Arian being led from a courthouse in handcuffs. [Source: Chris O'Meara/ Associated Press]Former Florida professor Sami al-Arian and three co-defendants are found not guilty of various counts of terrorist support, perjury, and immigration violations. The jury acquitted al-Arian of eight of the 17 federal charges against him and deadlocked on the rest. The New York Times calls the verdict “a major defeat for [US] law enforcement officials.” Al-Arian was indicted and imprisoned in 2003. He had been heavily investigated since 1995 and most of the charges related to events from 1995 or earlier (see 1995 and 1995-1998). Law professor Peter Margulies says, “I think the government’s case was somewhat stale because a lot of these events dated back ten years and the case was so complex that it was all over the board.” (Lichtblau 12/6/2005) Six months later, a federal judge will sentence al-Arian to an additional 19 months in jail in addition to the 38 months he has already served before being deported. Al-Arian will plead guilty to a lesser charge of aiding members of Palestinian Islamic Jihad and agree to be deported and in return the US will not retry him on the more serious charges. As part of the plea deal, al-Arian admits he raised money for the Palestinian Islamic Jihad (PIJ) and conspired to hide the identities of other members of the group. He denies committing any act of violence himself, but admits knowing “that the PIJ achieved its objectives by, among other means, acts of violence.” (Silvestrini 4/18/2006) The New York Times will note that the “outcome of the case against Mr. al-Arian did little to resolve the conflicting portraits of his life” as either a terrorism supporter or political scapegoat. (Steinhauer 5/2/2006)