This page can be viewed at http://www.historycommons.org/entity.jsp?entity=phillip_cooper_1

Phillip Cooper was a participant or observer in the following events: 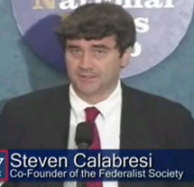 Steven Calabresi, one of the architects of the ‘unitary executive’ theory, says Bush’s use of signing statements has gone too far. [Source: MeFeedia]Legal scholars and constitutional experts decry President Bush’s claim that he can ignore or disobey laws with impunity. An examination by Boston Globe reporter Charlie Savage finds that to date, Bush has claimed the authority to disobey over 750 laws enacted since he took office (see January 20, 2001 and After, After September 11, 2001, January 27, 2002, November 5, 2002, March 12, 2004 and After, November 6, 2003, December 2004, December 17, 2004, Dec. 23, 2004, January 17, 2005, August 8, 2005, October 18, 2005, December 30, 2005, and January 23, 2006). He claims that as president, he has the power to override any statute passed by Congress when it conflicts with his interpretation of the Constitution. While the Constitution assigns Congress the power to write the laws and the president the duty “to take care that the laws be faithfully executed,” Bush asserts that he has no mandate to “execute” a law he believes is unconstitutional. Administration spokespersons have repeatedly said that Bush “will faithfully execute the law in a manner that is consistent with the Constitution,” but it is Bush who decides what is and is not constitutional. Many legal scholars disagree with Bush’s position, and accuse him of attempting to usurp Congressional power for himself.
Philip Cooper - Law professor Phillip Cooper says over the Bush administration’s tenure, it has relentlessly worked to concentrate ever more governmental power into the White House. “There is no question that this administration has been involved in a very carefully thought-out, systematic process of expanding presidential power at the expense of the other branches of government,” Cooper says. “This is really big, very expansive, and very significant.”
Christopher Kelley - Political science professor Christopher Kelley notes that Bush uses signing statements to abrogate Congressional powers in a manner inconsistent with Constitutional mandates. “He agrees to a compromise with members of Congress, and all of them are there for a public bill-signing ceremony, but then he takes back those compromises—and more often than not, without the Congress or the press or the public knowing what has happened,” Kelley says.
David Golove - Law professor David Golove says Bush has besmirched “the whole idea that there is a rule of law” because no one can be certain of which laws Bush thinks are valid and which he thinks he can ignore. “Where you have a president who is willing to declare vast quantities of the legislation that is passed during his term unconstitutional, it implies that he also thinks a very significant amount of the other laws that were already on the books before he became president are also unconstitutional,” Golove says. To the extent that Bush is interpreting the Constitution in defiance of Supreme Court rulings, Golove notes, he threatens to “overturn the existing structures of constitutional law.” When a president ignores the Court and is not restrained by a Congress that enables his usurpations, Golove says, the Constitution can be made to simply “disappear.” Golove adds, “Bush has essentially said that ‘We’re the executive branch and we’re going to carry this law out as we please, and if Congress wants to impeach us, go ahead and try it.’”
Jack Beerman - Law professor Jack Beermann says: “The president is daring Congress to act against his positions, and they’re not taking action because they don’t want to appear to be too critical of the president, given that their own fortunes are tied to his because they are all Republicans. Oversight gets much reduced in a situation where the president and Congress are controlled by the same party.”
Steven Calabresi - Former Justice Department official Steven Calabresi, who came up with the idea of using signing statements to counter Congressional powers during the Reagan administration (see August 23, 1985 - December 1985), now says, “I think what the administration has done in issuing no vetoes and scores of signing statements (see September 2007) is not the right way to approach this.”
Bruce Fein - Former Reagan Justice Department official Bruce Fein says: “This is an attempt by the president to have the final word on his own constitutional powers, which eliminates the checks and balances that keep the country a democracy. There is no way for an independent judiciary to check his assertions of power, and Congress isn’t doing it, either. So this is moving us toward an unlimited executive power.” (Savage 4/30/2006; Savage 2007, pp. 243)