This page can be viewed at http://www.historycommons.org/entity.jsp?entity=propaganda_due_1

Propaganda Due (P-2) was a participant or observer in the following events:

Billy Carter. [Source: Bettmann / Corbis]An Italian-American disinformation campaign has a profound effect on the US presidential election of 1980. With the assistance of Italian intelligence (SISMI) and the shadowy right-wing organization called “Propaganda Due,” or P-2 (see 1981), American neoconservative Michael Ledeen organizes a smear campaign against Billy Carter, the brother of US President Jimmy Carter. (Billy Carter is a self-proclaimed alcoholic whose escapades have provoked much hilarity among the US press and an equal amount of embarrassment in the White House.) In the weeks before the election, Ledeen publishes articles in the British and American press accusing Billy Carter of having untoward and perhaps illegal financial dealings with Libyan dictator Mu’ammar al-Qadhafi. Billy Carter is forced to admit that he did accept a $200,000 loan from al-Qadhafi’s regime. The ensuing scandal becomes known as “Billygate.” It is not known for sure what impact the scandal will eventually have on the race between President Carter and his Republican challenger, Ronald Reagan; what is known is that “Billygate” erupted in 1979, was investigated, and had died down. Then, less than a month before the November 1980 election, Ledeen and Arnaud de Borchgrave write an article for the US’s New Republic and Britain’s Now magazine that falsely alleges Billy Carter took an additional $50,000 from al-Qadhafi, and worse, met secretly with Palestinian leader Yasser Arafat. The articles reignite the scandal in time to affect the election. In 1985, a Wall Street Journal investigation will find that “Billygate” is an orchestrated attempt by Ledeen and SISMI to throw the election to Reagan. Ledeen, who used SISMI sources to unearth financial information on Billy Carter, was himself paid $120,000 by SISMI for “Billygate” and other projects. Ledeen has a code name, Z-3, and is paid through a Bermuda bank account. Ledeen will later admit that his consulting firm, ISI, may have accepted SISMI money, and will claim he can’t remember if he has a coded identity. P-2 operative Francesco Pazienza will be convicted in absentia on multiple charges stemming from the “Billygate” disinformation campaign, including extortion and fraud. Ledeen will not be charged in the Italian court that convicts Pazienza, but prosecutors will cite his participation in their arguments against Pazienza. Ledeen will deny any involvement with either Pazienza or P-2, and deny any connection to any disinformation schemes. In fact, Ledeen will say he doesn’t even believe P-2 exists. After Reagan takes office, Ledeen will be made a special assistant to chief of staff Alexander Haig, and later will become a staff member of Reagan’s National Security Council, where he will play a key role in setting up the arms-for-hostages deal with Iran. (Unger 2007, pp. 233-234, 388)

Licio Gelli. [Source: Reformation (.org)]“Propaganda Due,” or P-2, an informal, parallel Secret Service in Italy led by neofascist and Freemason Licio Gelli, is banned by the Italian Parliament, though the organization continues to function. (Gelli is expelled from the Masons the same year as P-2 is banned.) It had a penchant for secret rituals and exotic covert ops against what it considered Communist-based threats. P-2 members swear to have their throats slit and tongues cut out rather than break their oaths of secrecy and loyalty. Author Craig Unger characterizes the organization as “subversive, authoritarian, and right-wing.” It was sometimes called the “P-2 Masonic Lodge” because of its ties to the Freemasons. It served as a covert intelligence agency for militant anticommunists. It was also linked to Operation Gladio, a secret paramilitary wing of NATO that supported far-right military coups in Greece and Turkey during the Cold War. P-2 is banned by the Italian Parliament after an investigation found that it had infiltrated the highest levels of Italy’s judiciary, parliament, military, and press, and was linked to assassinations, kidnappings, and illicit arms deals around the world. The critical event was the murder of Freemason and bank president Roberto Calvi, who was found hanging from a bridge in London; the investigation found that P-2 may have been involved in Calvi’s murder. American neoconservative Michael Ledeen, who has long if murky connections with both US and Italian intelligence agencies, was a part of two major international disinformation operations in conjunction with P-2 and SISMI, the Italian military intelligence agency (see October 1980 and Mid-1981 through Late 1981). (BBC 10/16/1998; Grand Lodge of British Columbia and Yukon 12/14/2004; Unger 2007, pp. 232-233) 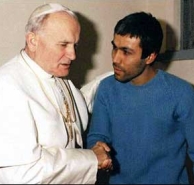 Pope John Paul II visits his would-be assassin, Mehmet Ali Agca, in prison, in 1983. [Source: CBS News]Columnist and Reagan foreign policy adviser Michael Ledeen, an American neoconservative with murky ties to both US and Italian intelligence (see October 1980), plays a key role in a disinformation campaign that attempts to blame Eastern European Communists for an attempt on Pope John Paul II’s life. A Turkish fascist, Mehmet Ali Agca, shot and nearly killed the Pope in May 1981. Shortly thereafter, Acga claimed to have taken his orders from the Soviet KGB through Bulgaria’s Secret Service. The story makes for fine Cold War propaganda, and Ledeen is one of its most relentless proponents, promoting it in news articles and television interviews around the world. But the story is most likely not true. “It just doesn’t pass the giggle test,” recalls Frank Brodhead, author of a book on the subject. Agca was a member of a far-right Turkish terrorist group called the Gray Wolves, Brodhead later says. “[I]t seemed illogical that a Turkish fascist would work with Bulgarian Communists.” Although Agca himself originated the claim, he is anything but reliable, widely considered a pathological liar by most involved in his case, and suffering from delusions of grandeur. (He often claims to be the reincarnation of Jesus Christ.) Eight men will be tried in Italian courts for their connections to the Bulgarian allegations, and all eight will be acquitted for lack of evidence. Agca will damage the case by constantly changing his story. At one point, Agca will say he made the Bulgarian accusation at the behest of Francesco Pazienza, a member of Propaganda Due (P-2), the shadowy right-wing organization. Agca says Pazienza offered him freedom in exchange for the claim. Agca will change that story as well. Washington Post reporter Michael Dobbs, who originally believes the Bulgarian story, will later come to believe that Agca’s tale “was invented by Agca with the hope of winning his release from prison… He was aided and abetted in this scheme by right-wing conspiracy theorists in the United States and William Casey’s Central Intelligence Agency, which became a victim of its own disinformation campaign.” Pazienza will later claim that the entire idea of a “Bulgarian connection” originated with Ledeen, a charge that Ledeen will angrily deny. (Unger 2007, pp. 388)