This page can be viewed at http://www.historycommons.org/entity.jsp?entity=rahmatullah_hashimi

Rahmatullah Hashimi was a participant or observer in the following events:

March-April 2001: Taliban Envoy Comes to US and Meets with High-Ranking Officials about Handing over Bin Laden 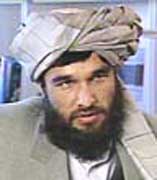 Rahmatullah Hashimi. [Source: PBS]Taliban envoy Rahmatullah Hashimi meets with reporters, middle-ranking State Department bureaucrats, and private Afghanistan experts in Washington. He carries a gift carpet and a letter from Afghan leader Mullah Omar for President Bush. He discusses turning bin Laden over, but the US wants to be handed bin Laden and the Taliban want to turn him over to some third country. A CIA official later says, “We never heard what they were trying to say. We had no common language. Ours was, ‘Give up bin Laden.’ They were saying, ‘Do something to help us give him up.’… I have no doubts they wanted to get rid of him. He was a pain in the neck.” Others claim the Taliban were never sincere. About 20 more meetings on giving up bin Laden take place up until 9/11, all fruitless. (Washington Post 10/29/2001) Allegedly, Hashimi also proposes that the Taliban would hold bin Laden in one location long enough for the US to locate and kill him. However, this offer is refused. This report, however, comes from Laila Helms, daughter of former CIA director Richard Helms. While it’s interesting that this information came out before 9/11, one must be skeptical, since Helms’ job was public relations for the Taliban. (Fard and Ridgeway 6/6/2001) Hashimi will mention to a reporter in June 2001 that he was in the US for a total of six weeks. (de Borchgrave 6/14/2001) According to one article at the time, Hashimi meets with “several senior officials from the State Department, CIA and National Security Council but also from the non-governmental organization Council on Foreign Relations.” Secretary of State Colin Powell is reportedly irate at the meetings because he had not been informed that high level officials would be meeting with Hashimi in the US. He blames CIA Director George Tenet “having laid on a red carpet for [Mullah] Omar’s adviser.” (Intelligence Newsletter 4/19/2001) Hashimi reportedly directly meets with Tenet. (Marlow 11/19/2001)