This page can be viewed at http://www.historycommons.org/entity.jsp?entity=raila_odinga_1

Raila Odinga was a participant or observer in the following events:

August 1, 2008 and After: Right-Wing Author Smears Obama in Book Riddled with Falsehoods 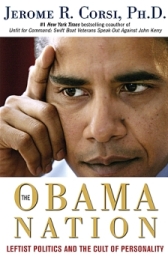 The cover of Klein and Elliott’s ‘The Manchurian President.’ [Source: Borders (.com)]The progressive media watchdog organization Media Matters finds a number of dubious or outright false claims in a recent book by Aaron Klein entitled The Manchurian President: Barack Obama’s Ties to Communists, Socialists, and Other Anti-American Extremists. Klein is a reporter for the conservative news blog WorldNetDaily, which has taken a lead role in accusing President Obama of not being an American citizen (see December 5, 2008, May 28, 2009, and August 1-4, 2009). Among other disproven claims, Klein writes that “terrorist” William Ayers (see October 4-5, 2008) was the “ghostwriter” of Obama’s 1995 memoir Dreams From My Father; Kenyan prime minister Raila Odinga is Obama’s cousin (using the false relationship to try to link Obama with Odinga, whom Klein calls a “traitor” to Kenya); Obama supports “involuntary birth-control measures,” which Klein describes as “compulsory, government-mandated ‘green abortions’ [to] control population growth and prevent ecological disasters”; and Obama sought and received support from the socialist New Party in the early stages of his political career. Klein also attempts to portray the church that Obama attended as a child, the First Unitarian Church of Honolulu, as a “staging ground” for his supposed “antiwar activism” and “socialism”; claims a number of ties between Obama and Communist “black activists”; and makes other claims. Klein also attempts to argue that “Obama may not be eligible to serve as president.” After admitting that there is “no convincing evidence that Obama was born in Kenya, nor that his birthplace was any place other than Hawaii, his declared state of birth,” Klein claims that because Obama’s father was not a US citizen, there should have been “Congressional debate about whether Obama is eligible under the United States Constitution to serve as president,” focusing on the legal definition of the constitutional requirement that the president be a “natural born citizen.” Klein ignores most accepted legal opinions on the subject, instead focusing on a 1758 treatise called The Law of Nations and an obscure Supreme Court decision, Minor v. Happersett. Both the treatise and the Court decision have been routinely cited by “birther” lawyers attempting to challenge Obama’s citizenship, Media Matters notes. (Media Matters 5/7/2010) Reviews of the book are mixed. David Horowitz’s far-right publication Front Page Magazine calls the book a “meticulously documented piece of outstanding investigative research” that “blow[s] the lid off the dome of silence surrounding the Obama administration.” Klein and co-author Brenda J. Elliot “reveal surreptitious ties to radical leftists of all stripes,” the review states. (Front Page Magazine 6/16/2010) Terry Krepel, the progressive founder of ConWebWatch, calls Klein’s entire book an exercise in “guilt by association,” using as one of several examples Obama’s attendance at the Honolulu church: Obama was a young boy at the time; the group that Ayers was a part of, Students for a Democratic Society (SDS), had splintered two years before Obama began attending church services; and Klein never shows any proof that what he calls “Ayers’s ideology” made it into the Sunday school curriculum. The book is entirely “dishonest,” Krepel concludes. (Krepel 5/9/2010)