This page can be viewed at http://www.historycommons.org/entity.jsp?entity=remote_area_medical_1

Remote Area Medical was a participant or observer in the following events: 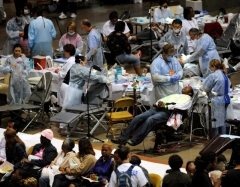 Hundreds wait in line for dental care at the Remote Area Medical clinic at The Forum. [Source: UPI / Jim Ruymen]The New York Times cites an eight-day health care event in Inglewood, California, as evidence of the overwhelming need for health care reform. Thousands of residents, who either lack any health insurance at all or are underinsured, line up every day outside The Forum, where the Los Angeles Lakers used to play professional basketball, to see a doctor, dentist, or nurse. The event serves 1,500 people per day; hundreds more are unable to get in to be seen. “It looked as if it was happening in an underdeveloped country, where villagers might assemble days in advance for care from a visiting medical mission,” the Times writes. “But it was happening in a major American metropolitan area. This vast, palpable need for help is a shameful indictment of our health care system—one that politicians opposed to reform insist is the world’s best.” The event is run by an organization called Remote Area Medical, originally formed to provide critical care to natives living in the Amazon basin. But the group realized that tremendous need exists within America itself, and began delivering free services in rural areas of the country. It has now expanded into urban areas. The first day, the group sees around 1,000 patients, and asks hundreds more to return the next day. By August 13, it has all available slots for the eight-day event committed. The Times writes: “The clinics are an inspiring example of what dedicated volunteers can do. But they are temporary events and come nowhere near to meeting the nation’s needs. Health care reforms under consideration in Congress could make big strides toward filling the gaps: by offering less costly insurance on new exchanges; by expanding Medicaid to cover more poor people and reaching out more vigorously to enroll them; by subsidizing coverage for low-income people; by helping increase the supply of primary care doctors; by requiring insurers to offer essential benefits and preventing them from denying coverage because of pre-existing conditions.… Americans deserve to know all of the facts, including that tens of millions of their neighbors and friends have no health insurance coverage at all or insurance that is grossly inadequate. If they still have doubts about why reform is so necessary, they should take another look at those lines in Inglewood.” (Guardian 8/12/2009; New York Times 8/15/2009; United Press International 8/15/2009)