This page can be viewed at http://www.historycommons.org/entity.jsp?entity=right_principles_1

Right Principles was a participant or observer in the following events: 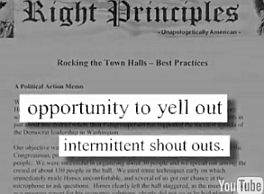 A screenshot from a Democratic National Committee ad highlighting phrases from the memo. [Source: Weekly Standard]The conservative Web site and political action committee (PAC) Right Principles releases a memo entitled “Rocking the Town Halls: Best Practices,” written by Bob MacGuffie, a founder of the organization and a volunteer with the “Tea Party Patriots,” a subsidiary of the conservative lobbying group FreedomWorks (see April 14, 2009). (Fang 7/31/2009; Tea Party Patriots 8/6/2009) The organization is very small—basically MacGuffie and four friends—and although MacGuffie volunteers with the aforementioned tea party group, he insists he and his organization have no connections to the much larger and well-funded FreedomWorks or other lobbying organizations that support anti-health care protests. “We are recommending with that memo that other grassroots groups that share our view should go to the town halls of their members and use the strategy that we did,” MacGuffie says. “We are trying to get into that town halls to make them understand that they do not have the unanimous support from people in their communities.” (Beutler 8/3/2009) Although the site either never posts the memo or takes it down shortly after, it quickly circulates throughout the conservative community (see July 23, 2009), and will be used to disrupt “town hall” meetings by Democratic House members, who intend to spend time during the August recess holding such meetings to discuss the Obama administration’s health care proposals. (Right Principles 2009; Fang 7/31/2009) MacGuffie later claims to have first e-mailed the memo to “8-10 community activists” in June. (Ham 8/5/2009)
'Best Practices' - The memo advises conservative activists and protesters of the best ways to dominate and disrupt the town hall meetings. Basing the memo on actions conducted by Right Principles members and supporters during a May 2009 town hall meeting held by Congressman Jim Himes (D-CT), MacGuffie writes, “We believe there are some best practices which emerged from the event and our experience, which could be useful to activists in just about any district where their congressperson has supported the socialist agenda of the Democrat leadership in Washington.” Some of the steps include:

Artificially inflating numbers. “Spread out in the hall and try to be in the front half. The objective is to put the rep on the defensive with your questions and follow-up. The rep should be made to feel that a majority, and if not, a significant portion of at least the audience, opposes the socialist agenda of Washington.”

Being disruptive from the outset. “You need to rock the boat early in the rep’s presentation. Watch for an opportunity to yell out and challenge the rep’s statements early.” The memo also advises, “Don’t carry on and make a scene, just short, intermittent shout-outs.”

Attempt to rattle or goad the speaker. “The goal is to rattle him, get him off his prepared script and agenda. If he says something outrageous, stand up and shout out and sit right back down. Look for these opportunities before he even takes questions.”
The memo also attaches some possible questions for the representatives, “which apply to most any Democrat that is supporting the socialist agenda,” it says. (Bob MacGuffie 7/2009

; Fang 7/31/2009) Progressive news and advocacy Web site Think Progress will note that the questions closely resemble talking points handed out in July by FreedomWorks. (Fang 7/31/2009) Liberal MSNBC host Rachel Maddow will accuse Right Principles of crafting a “how-to” manual for disruptive “rent-a-mob” activities. (Carpenter 8/6/2009) The conservative Weekly Standard will accuse “liberal media” outlets such as Think Progress and MSNBC of “manufacturing outrage” over the memo, and prints MacGuffie’s denials of having any connections to FreedomWorks. “There is no formal connection,” he says. “I don’t know anyone from FreedomWorks.” (Ham 8/5/2009)