This page can be viewed at http://www.historycommons.org/entity.jsp?entity=robert_loria_1

Robert Loria was a participant or observer in the following events:

December 2004: US Soldier Injured in Iraq Billed by US Army 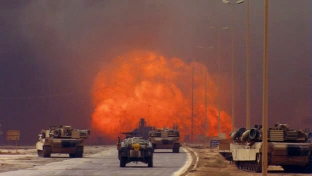 A roadside bomb detonates on an Iraqi highway. [Source: Representational Pictures]Upon being released from Fort Hood, Texas, 27-year-old Spc. Robert Loria is presented with a $1,768.81 bill from the US Army. (Cahn 12/10/2004) Loria was seriously injured on February 9, when the Humvee in which he was riding was hit by a roadside bomb. (Infield 3/21/2004) The explosion “tore Loria’s left hand and forearm off, split his femur in two and shot shrapnel through the left side of his body.” (Cahn 12/10/2004) After four months of rehabilitation at Walter Reed Hospital in Washington, D.C., he was sent to Fort Hood where he stayed several more months. When he is finally ready to leave, instead of receiving a check for the $4,486 he thought was owed to him, he receives a huge bill. The Army says he owes $2,408.33 for 10 months of family separation pay that the Army mistakenly paid him, $2,204.25 in travel expenses from Fort Hood back to Walter Reed for a follow-up visit, and $310 for unreturned equipment that Loria says was damaged or destroyed when his Humvee was attacked. Including taxes, the total amount Lori owes the Army is $6,255.50, almost $2,000 more than the amount he thought was owed to him. After a local newspaper runs a story on his situation and causes a public uproar, the Army waives most of Loria’s debts. (Seattle Times 10/11/2004; Cahn 12/10/2004; Associated Press 12/11/2004)