This page can be viewed at http://www.historycommons.org/entity.jsp?entity=rudi_dekkers_1

Rudi Dekkers was a participant or observer in the following events:

Huffman Aviation. [Source: FBI]Huffman Aviation, the Venice, Florida flight school later attended by Mohamed Atta and Marwan Alshehhi (see July 1-3, 2000) is sold to Naples-based flight school Ambassador Airways, which is owned by Wally Hilliard and Rudi Dekkers. Although Hilliard finances the purchase, Dekkers becomes the sole stockholder. Dekkers is a Dutch national with a highly questionable past. The St. Petersburg Times will later comment, he “seems to have benefited from the same type of casual scrutiny of visa applicants that let the 9/11 hijackers live and train here [in the US].” Even before 9/11, he has “a long history of troubled businesses, run-ins with the Federal Aviation Administration and numerous lawsuits… It is the kind of checkered history, experts say, that should have raised questions both before and after the 9/11 attacks about Dekkers’ fitness to run a school that trained pilots.” Having previously run a computer company in the Netherlands that went bankrupt, he’d moved to Naples, Florida in 1992. After running a computer chip exporting company, he’d started Ambassador Airways. Yet he’d been so late on some of his bills there that at one point the Naples airport refused to sell him aviation fuel, even if he paid cash. At some point in 1999 the FAA revoked his pilot’s license for 45 days—a severe penalty—for several violations, including “operating an aircraft in a careless or reckless manner.” In spite of Dekkers’ dubious history and the fact that his Ambassador Airways is struggling, Wally Hilliard, a prominent retired businessman, loans him $1.7 million to buy Huffman Aviation. Dekkers says he plans spending $60,000 per year promoting the school, advertising extensively in Germany and other European countries. (McIntyre 5/29/1999; Mudge 1/25/2003; Martin 7/25/2004) Huffman Aviation is just up the road from Florida Flight Training Center, where Ziad Jarrah, the alleged pilot of Flight 93, will begin flying lessons in summer 2000 (see (June 28-December 2000)). (Corte 9/9/2002) Dekkers will close Ambassador Airways in December 2001, due to financial difficulties, and sell Huffman Aviation in January 2003. (Zoldan 1/25/2003; Kimel 1/28/2003)

Rudi Dekkers, who owns the Venice, Florida flight school attended by 9/11 hijackers Mohamed Atta and Marwan Alshehhi, sets up his own commuter airline called Florida Air (FLAIR), which flies out of Sarasota Bradenton International Airport. FLAIR, which also goes by the name Sunrise Airlines, will only be in service for a couple of months in 2001, and eventually has its operating authority revoked by the Department of Transportation. (Venice Gondolier Sun 3/3/2001; Transportation 2/14/2002, pp. 6963

) Considering he reportedly offers him a job with his airline, it seems odd that Dekkers later claims having much disliked Atta when he was at Huffman. He will say he thought Atta was “very arrogant,” and that “My personal feeling was Atta was an asshole first class… I just didn’t like the guy… Sometimes you have that impression from when you meet people in the field and that was my first impression.” (Australian Broadcasting Corporation 10/21/2001; BBC 12/12/2001)

According to an associate of the 9/11 hijackers, Ramzi bin al-Shibh, and flight school owner Rudi Dekkers, the hijackers have more training on large jets than the FBI will disclose. The FBI will say that the four hijacker pilots never fly real large jets before 9/11 and have a total of approximately 17 sessions on large aircraft simulators, mostly on older models:

Both Mohamed Atta and Marwan Alshehhi each take two sessions lasting 90 minutes on a Boeing 727 simulator and one session on a simulator for a Boeing 767, the type of aircraft they fly on 9/11 (see December 29-31, 2000);

Hani Hanjour, who flies a Boeing 757 on 9/11, practices for a total of 21 hours on a Boeing 737-200 simulator (see February 8-March 12, 2001).
When he learns what the FBI believes is the extent of the hijackers’ training, bin al-Shibh will complain in a fax sent to a reporter after 9/11: “How do aviation experts evaluate the skill with which the aircraft were flown, especially the Pentagon attack—accurate and professional as it was? Is it credible that the executers had never before flown a Boeing? Is it credible they only had some lessons on small twin-engine aircrafts and some lessons on simulators?” Referring to the period in early 2001 after the pilots spend a few hours practicing on simulators, bin al-Shibh will say, “What they needed was more flying hours, more training on simulators of large commercial planes such as Boeing 747s and Boeing 767s, as well as studying security precautions in all airports.” However, apparently bin al-Shibh does not mention exactly when or where such additional training took place, if in fact it did. (Fouda and Fielding 2003, pp. 24-6, 38, 134) Interviewed two days after 9/11, Dekkers, at whose flight school Mohamed Atta and Marwan Alshehhi initially trained (see July 6-December 19, 2000), will comment, “After the training they had here they went to another flight school in Pompano Beach and they had jet training there, simulator or big planes, but there is where they conducted the training to do what they had to do.” Dekkers will say that he has heard this “from several directions.” However, the Pompano Beach school is not named. (Dekkers 9/13/2001)

Rudi Dekkers, owner of Huffman Aviation—the Venice, Florida flight school attended by Mohamed Atta and Marwan Alshehhi—faces a series of legal suits. On August 23, 2001, a former female employee initiates a suit to enforce the settlement of a charge of “severe” sexual harassment by Dekkers. Huffman Aviation earlier agreed to pay her $15,000 in return for her not suing them. (Mudge 10/3/2001; Martin 7/25/2004) In August 2002, Dekkers’ former business partner Wally Hilliard files a suit, claiming Dekkers has failed to repay several loans, including one for $1.7 million, and also owes money for Huffman stock he sold him. (McIntyre 8/24/2002) In January 2003, the state attorney’s office files criminal fraud charges against Dekkers for securing a loan of $200,000 with a mortgage on property his company had no legal interest in. The suit could result in a five-year prison sentence, but is later dismissed. (McIntyre 1/18/2003; Associated Press 1/22/2003; Mudge 1/25/2003; McIntyre 12/6/2003) And in April 2004, along with Hilliard, he is accused of making as many as 26 unauthorized passenger flights during 1999, and faces a fine of up to $286,000. (Associated Press 4/14/2004) In July 2004, the St. Petersburg Times will comment that Dekkers “continues to drive expensive vehicles and live in a million-dollar waterfront home, even though a Naples lawyer had ‘to chase him around’ to get him to pay a $359 judgment.” Even before 2001, Dekkers had a history of troubled businesses and being the subject of legal suits. In spite of this, following 9/11 he becomes a much sought-after figure by the media, later remarking, “I’m always on television somewhere.” He is even invited to testify before Congress regarding the two hijackers’ attendance at his flight school. (US Congress 3/19/2002; McIntyre 8/24/2002; Martin 7/25/2004) 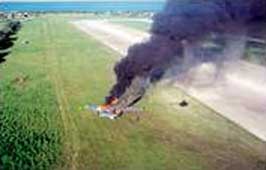 The crash of Arne Kruithof’s plane at Venice Municipal Airport. [Source: Public domain]Within the space of seven months, the owners of two Venice, Florida flight schools attended by several of the alleged 9/11 suicide pilots are separately in serious air accidents. On June 26, 2002, Arne Kruithof, whose Florida Flight Training Center was attended by Ziad Jarrah, survives a crash at the Venice Municipal Airport. He is a passenger in a twin-engine plane, which suddenly pulls to the left when about 50 feet off the runway and the pilot is unable to regain control. All the passengers are uninjured, but the plane is damaged extensively. (McIntyre 6/29/2002) On January 24, 2003, Rudi Dekkers, whose Huffman Aviation was attended by Marwan Alshehhi and Mohamed Atta, crashes his helicopter. He is flying to work early in the morning for a meeting with a competitor, to sell his flight school to them. Ten minutes after takeoff, his engine cuts out and he crashes into a river. He is rescued from the ice-cold water by a friend and fellow helicopter pilot who pulls him to shore. He arrives in Venice later in the day, and is able to proceed with the sale of Huffman Aviation. Two days earlier, the Associated Press had announced that Dekkers was to be arrested on felony fraud charges (see August 23, 2001-April 2004). (Associated Press 1/22/2003; Associated Press 1/24/2003; Mudge 1/25/2003; Zoldan 1/25/2003; Kimel 1/28/2003) In 2011, Dekkers will say that he is convinced someone tried to kill him, although he doesn’t know who. “The fuel lines were cut.” (Brecher 5/5/2011)