This page can be viewed at http://www.historycommons.org/entity.jsp?entity=russell_baer_1

Russell Baer was a participant or observer in the following events: 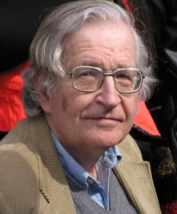 Noam Chomsky, noted linguist and and “anti-imperialism” activist. [Source: Convencion Bautista (.com)]Pat Tillman (see May 23-June 1, 2002) enlists a friend, MIT graduate student Jared Schrieber, to email MIT linguistics and philosophy professor Noam Chomsky. Tillman wants to set up a meeting with Chomsky, an opponent of the Bush administration’s war on terror and someone Tillman has long admired. Later, Tillman’s mother, Mary Tillman, will say that Tillman and Chomsky were to meet after her son completed his military tour of duty in July 2005, a meeting later confirmed by Chomsky. (Fish 4/2006) After Tillman’s death (see April 23, 2004), it will emerge that, like his brother Kevin, a philosophy major, he read widely and was known to family and friends as a deep and independent thinker. Russell Baer, a fellow Ranger who served with the brothers in Iraq and Afghanistan, will recall Tillman saying of the Iraq war, “this war is so f_cking illegal.” His mother will state that, while feeling that the Afghan war was “justified by the September 11 attacks,” her son was against “the whole Iraq war.” Further, a soldier who requests anonymity will say that Tillman “urged him to vote for Bush’s Democratic opponent in the 2004 election, Senator John Kerry.” (Collier 9/25/2005; Smith 9/11/2006) Ann Coulter, conservative political commentator, and Sean Hannity, co-host of the Fox News show Hannity & Colmes, will dispute reports that say Tillman respected Chomsky, endorsed Senator John Kerry, or opposed Bush. “I don’t believe it,” Coulter will say. “I don’t believe it either,” Hannity will agree. (Media Matters 9/24/2005; Zirin 10/24/2005)