This page can be viewed at http://www.historycommons.org/entity.jsp?entity=saparmurat_niyazov

Positions that Saparmurat Niyazov has held:

Saparmurat Niyazov was a participant or observer in the following events: 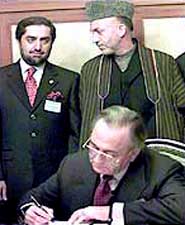 Leaders sign the pipeline agreement. [Source: Associated Press]Afghanistan’s interim leader, Hamid Karzai, Turkmenistan’s President Niyazov, and Pakistani President Musharraf meet in Islamabad and sign a memorandum of understanding on the trans-Afghanistan gas pipeline project. (Hashmi 5/31/2002; Alexander's Gas & Oil Connections 6/8/2002) Afghan leader Hamid Karzai (who formerly worked for Unocal) calls Unocal the “lead company” in building the pipeline. (BBC 5/13/2002) The Los Angeles Times comments, “To some here, it looked like the fix was in for Unocal when President Bush named a former Unocal consultant, Zalmay Khalilzad, as his special envoy to Afghanistan late last year .” (Watson 5/30/2002) Unocal claims that it has no interest in any Afghanistan pipeline after 9/11. However, Afghan officials say that Unocal will be the lead company in funding the pipeline. The Afghan deputy minister of mines comments on Unocal’s claim of disinterest: “Business has its secrets and mysteries. Maybe… they don’t want it to be disclosed in the media.” (Landsberg 3/2/2003)