This page can be viewed at http://www.historycommons.org/entity.jsp?entity=selena_salcedo_1

Selena Salcedo was a participant or observer in the following events:

December 5-9, 2002: Taxi Driver Arrested in Afghanistan and Handed to US Forces 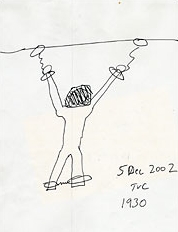 A sketch by MP Sergeant Thomas Curtis showing how Dilawar was chained to the ceiling of his cell. [Source: New York Times]Dilawar, a 22-year-old Afghan farmer and part-time taxi driver from the small village of Yakubi in eastern Afghanistan, is picked up by local authorities and turned over to US soldiers. Dilawar is described as a shy, uneducated man with a slight frame, rarely leaving the stone farmhouse he shares with his wife and family. He is captured while driving a used Toyota sedan that his family bought him to use as a taxi. He has three fares, men headed back towards his village, and is stopped by Afghan militiamen loyal to the guerrilla commander Jan Baz Khan. (Khan will later be taken into custody himself for allegedly attacking US targets and then turning over innocent villagers to US forces, accusing them of carrying out the attacks.) The militia confiscates a broken walkie-talkie from one of the passengers, and an electric stabilizer used to regulate current from a generator in the trunk of the Toyota (Dilawar’s family later says the stabilizer is not theirs; they have no electricity). All four men are turned over to American soldiers at Bagram Air Force Base as suspects in a recent rocket attack on the US base at Khost. They spend the first night handcuffed to the fence to deprive them of sleep. Dilawar is then examined by the base doctor, who pronounces him healthy.
Passengers Shipped to Guantanamo, Say Bagram Treatment Far Worse - Dilawar’s three passengers are eventually shipped to Guantanamo for a year, before being released without charge. The three will describe their ordeal at Bagram as far worse than their treatment at Guantanamo. All will claim to have been beaten, stripped in front of female guards, and subjected to repeated and harsh rectal exams. Abdul Rahim, a baker from Khost, will recall: “They did lots and lots of bad things to me [at Bagram]. I was shouting and crying, and no one was listening. When I was shouting, the soldiers were slamming my head against the desk.” Another of Dilawar’s passengers, Parkhudin, later recalls that Dilawar “could not breathe” in the black cloth hood pulled over his head.
Running Joke - Though Dilawar is shy and frail, he is quickly labeled “noncompliant.” One US military policeman, Specialist Corey Jones, reports that Dilawar spat on him and tried to kick him. Jones retaliated by giving him a number of “peroneal knee strikes” (see May 20, 2005). As Jones will later recall: “He screamed out, ‘Allah! Allah! Allah!’ and my first reaction was that he was crying out to his god. Everybody heard him cry out and thought it was funny. It became a kind of running joke, and people kept showing up to give this detainee a common peroneal strike just to hear him scream out ‘Allah.’ It went on over a 24-hour period, and I would think that it was over 100 strikes.” Several other guards will later admit to striking Dilawar. While most MPs deny any knowledge of Dilawar being injured by the physical assaults, Jones will remember seeing Dilawar’s legs when his orange drawstring pants fell off of him while he was shackled. “I saw the bruise because his pants kept falling down while he was in standing restraints,” Jones will later recall. “Over a certain time period, I noticed it was the size of a fist.” Dilawar’s repeated cries and pleas for his release do little besides annoy his captors.
Fourth Interrogation Marked by Beatings - Dilawar’s fourth interrogation, on December 8, turns sour. Lead interrogator Specialist Glendale Walls will contend that Dilawar is hostile and evasive. Sergeant Selena Salcedo, another interrogator, will say that Dilawar smiled, refused to answer questions, and refused to stay kneeling on the ground or in his ordered “chair-sitting” posture against the wall. But the interpreter present, Ahmad Ahmadzai, has a different recollection. According to Ahmadzai, Dilawar denies launching any rockets at the Americans. He is unable to hold his cuffed hands above him while kneeling, and Salcedo slaps them back up whenever they begin to droop. “Selena berated him for being weak and questioned him about being a man, which was very insulting because of his heritage,” Ahmadzai will tell investigators. Both Salcedo and Walls repeatedly slam Dilawar against the wall: “This went on for 10 or 15 minutes,” Ahmadzei will say. “He was so tired he couldn’t get up.” Salcedo begins stamping his foot, yanking his head by grabbing his beard, and kicking him in the groin. Ahmadzai will state: “About the first 10 minutes, I think, they were actually questioning him, after that it was pushing, shoving, kicking and shouting at him. There was no interrogation going on.” Salcedo orders the MPs to keep him chained to the ceiling of his cell until the next shift comes on. (Ackerman 8/21/2004; Golden 5/20/2005)
Chained to the Ceiling - The next morning, Dilawar is still chained to his ceiling. He begins shouting during the morning, and is ignored until around noon, when MPs ask another interpreter, Ebrahim Baerde, to see if he can calm Dilawar. Baerde will tell investigators: “I told him, ‘Look, please, if you want to be able to sit down and be released from shackles, you just need to be quiet for one more hour.’ He told me that if he was in shackles another hour, he would die.” A half-hour later, Baerde returns to the cell to find Dilawar slumped in his chains. “He wanted me to get a doctor, and said that he needed ‘a shot,’” Baerde will recall. “He said that he didn’t feel good. He said that his legs were hurting.” Baerde tells a guard, who checks Dilawar’s circulation by pressing down on his fingernails. According to Baerde, the guard says: “He’s okay. He’s just trying to get out of his restraints.” (Gall 3/4/2003; Campbell 3/7/2003; Gumbel 3/7/2003; Ackerman 8/21/2004; Gall and Rohde 9/17/2004; Golden 5/20/2005)
Dead Days Later - Dilawar will be found dead in his cell days later (see December 10, 2002).