This page can be viewed at http://www.historycommons.org/entity.jsp?entity=site_r_1

Site R was a participant or observer in the following events:

With the approval of President Harry S. Truman, the US government constructs a massive 200,000-square-foot underground facility along the Maryland-Pennsylvania border, about seven miles north of Camp David and about 65 miles north of Washington, DC. Site-R at Raven Rock, officially known as the Alternate Joint Communications Center, is one of 96 bunkers being assembled around the nation’s capital in preparation for a potential nuclear conflict with the Soviet Union (see 1950-1962). Site-R is designed to serve as a complete backup to the Pentagon in times of war and is complete with state-of-the-art technology, alternate command posts, war rooms, and living spaces for top officials. The subterranean fortress resembles a small city, with all the basic necessities for sustaining a population in the thousands for months at a time. The site is equipped with its own self-generating power supply, offices, medical clinic, fire department, mail service center, dining halls, and dormitories. The facility is said to have its own a chapel, two fishing lakes, a barbershop, a drug store, and even a bowling alley. There are also rumors that an underground tunnel connects Site-R to Camp David less than 10 miles to the south. Decades later, Vice President Dick Cheney and other high-ranking officials will relocate to Site-R in the aftermath of the terrorist attacks of September 11, 2001 (see (11:00 a.m.) September 11, 2001 and September 12, 2001-2002). (Guo 8/7/1985; Gup 5/31/1992; Gifford 12/2/2000; Weiser 6/25/2002; Goldstein 7/20/2004)

Fears of a nuclear conflict with the Soviet Union inspire the US government to construct a network of 96 nuclear-resistant fallout shelters around Washington, DC. The underground “Federal Relocation Centers,” collectively known as the “Federal Relocation Arc,” are designed to serve as both living quarters and command bunkers for a post-nuclear government. The underground installations will later be described as the “backbone” of the ultra-secretive Continuity of Government (COG) program, which is meant to keep the government functioning in times of national emergency. Under Presidents Harry S. Truman and Dwight D. Eisenhower, the US government spends billions of dollars carving out caves and assembling the underground fortresses in preparation for nuclear war. Upon completion, the bunkers are said to resemble small cities, each capable of sustaining a population in the thousands for months at a time. Each facility is equipped with its own self-generating power supply, fresh water source, living quarters, food rations, command posts, telecommunications equipment, and other requirements for housing officials and running the federal government from deep underground. In the event of a crisis, high-ranking officials, most notably the president and those in the presidential chain of command, are to be secretly whisked away to the underground installations in order to ensure the continuation of government functions. Some of the known underground locations include Mount Weather, fortified within the Blue Ridge Mountains about 50 miles west of Washington, DC (see 1952-1958); Site R, along the Maryland-Pennsylvania border near Camp David (see 1950-1954); and the Greenbrier, underneath a hotel resort in White Sulphur Springs, West Virginia (see 1959-1962). (Pollock 3/1976; Gup 12/9/1991; Gup 5/31/1992; Gup 8/10/1992; Gifford 12/2/2000; Weiser 6/25/2002)

(11:00 a.m.) September 11, 2001: Deputy Defense Secretary Wolfowitz and Others Leave the Pentagon for the Alternate Command Center

Deputy Defense Secretary Paul Wolfowitz leaves the Pentagon and relocates to the alternate military command center outside Washington, DC. Wolfowitz evacuated from his office to an area in front of the Pentagon after the building was hit, but then went back inside and joined Defense Secretary Donald Rumsfeld and others in the National Military Command Center (NMCC). (Wolfowitz 5/9/2003) With smoke seeping into the center, Wolfowitz advises Rumsfeld to leave the NMCC (see (10:40 a.m.-11:00 a.m.) September 11, 2001). But instead Rumsfeld orders Wolfowitz to leave and fly to Site R, the alternate command center, which is located inside Raven Rock Mountain, about six miles north of Camp David, on the Pennsylvania-Maryland border. (Schwartz 11/2001; Vogel 2007, pp. 441) Wolfowitz will later recall that he “was not happy about” receiving this order. (Wolfowitz 5/9/2003) Minutes later, a helicopter lands outside the Pentagon, and carries Wolfowitz and several others off to the alternate command center. (Goldberg et al. 2007, pp. 132) Site R was designed as a duplicate of the NMCC, and if the NMCC were ever destroyed in an attack or needs to be evacuated, it would serve as the Pentagon’s primary command center. (Creed and Newman 2008, pp. 174) It has “more than 700,000 square feet of floor space, sophisticated computer and communications equipment, and room for more than 3,000 people.” (Schwartz 11/2001) Others who will relocate to Site R on this day include Army Secretary Thomas White and personnel from the office of the vice chairman of the Joint Chiefs of Staff, though White will return to the Pentagon later on (see (11:00 a.m.) September 11, 2001). (Rumsfeld 1/9/2002; Myers 9/11/2002; Goldberg et al. 2007, pp. 135) According to journalist and author James Mann, Rumsfeld’s decision to order Wolfowitz to leave Washington has its roots in a top secret program Rumsfeld was involved in during the 1980s, which serves to ensure the “Continuity of Government” (COG) in the event of an attack on the US (see 1981-1992). (Mann 2004, pp. 138-139) Counterterrorism “tsar” Richard Clarke activated the COG plan shortly before 10:00 a.m. this morning (see (Between 9:45 a.m. and 9:56 a.m.) September 11, 2001). (Clarke 2004, pp. 8)

(11:00 a.m.) September 11, 2001: Secretary of the Army White Is Unnecessarily Sent to a Secure Location outside Washington

Secretary of the Army Thomas White is ordered to leave the Pentagon and go to Site R, an alternate military command center outside Washington, DC, but the decision to send him there will subsequently be found to have been a mistake and so he will return to the Pentagon later in the day. (Chiarelli 2/5/2002; Christopher N. Koontz 2011, pp. 57

)
Army Secretary Is Ordered to Leave the Pentagon - After he has spent some time in the AOC, though, he is ordered to leave the Pentagon and go to Site R, a secure complex of buildings on the Pennsylvania-Maryland border. (Goldberg et al. 2007, pp. 135; Arkin 2013, pp. 176) The facility was designed as a duplicate of the Pentagon’s National Military Command Center (NMCC) that would serve as the Pentagon’s primary command center if the NMCC was destroyed in an attack or needed to be evacuated. (Creed and Newman 2008, pp. 174) White is ordered to go there by Major General Peter Chiarelli, the Army’s director of operations, readiness, and mobilization. Chiarelli will later recall that he issued the order to White after he “got word that we were going to exercise a relocation plan of key leaders to a place called Site R.”
White Initially Objects to Leaving the Pentagon - White is unhappy when he is first told that he has to leave the Pentagon and refuses to go. “He communicated he was not leaving, he was staying in the building,” Chiarelli will recall. But the officer in charge of the relocation and continuity of operations plan then explains to Chiarelli that White has to go to Site R. He says: “Sir, he has no choice at this time. This has been directed and he must immediately proceed to leave here. This is bigger than him. This is continuity of the government of the United States.” Chiarelli asks the officer, “Are you sure of this?” and the officer replies: “Yes, I’m sure. Sir, you need to go up and tell him he needs to get up and go.” Chiarelli therefore goes up to White and tells him that he has “no choice; he was bound to do this; we had gotten word that this portion of the implementation plan was in effect, and that he must proceed directly to a specified place in the building where he would get in a helicopter and leave.” White then agrees to go to Site R.
Order to Send White Away Will Be Found to Be Unnecessary - He leaves the Pentagon at the same time as Deputy Secretary of Defense Paul Wolfowitz does (see (11:00 a.m.) September 11, 2001) and the two men are flown to the secure facility in the same helicopter, according to Chiarelli. However, personnel in the AOC will subsequently discover that the decision to send White to Site R was a mistake. “We found out that it wasn’t required for him to leave at that particular point in time, because the level of evacuation did not reach his level,” Chiarelli will say. The unnecessary order came about because the person who said White had to leave the Pentagon “misspoke over the phone,” he will add. White will therefore return to the Pentagon about four hours after leaving it. (Chiarelli 2/5/2002)
Army Vice Chief of Staff Will Be in Charge While White Is Away - As secretary of the Army, White is the top civilian leader for the US Army and is responsible for the effective and efficient functioning of the Army. (US Department of the Army 7/9/2002

; Collins 4/7/2017) He is also the “top executive agent in the Pentagon hierarchy,” the “coordinator of continuity for the Pentagon,” and the “middleman for military support to civil authorities,” according to military expert and author William Arkin. But while he is away from the Pentagon, General John Keane, vice chief of staff of the Army, will be “in charge of the Army (and of decisions relating to military support to civil authorities),” Arkin will write. (Arkin 2013, pp. 176) 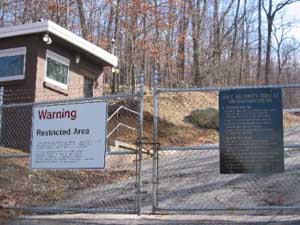 Raven Rock Mountain, the location of ‘Site R.’ [Source: Unknown]After arriving at the alternate military command center outside Washington, Deputy Secretary of Defense Paul Wolfowitz reports that the computer and communications systems there are hardly functioning. Secretary of Defense Donald Rumsfeld ordered Wolfowitz to leave the Pentagon and relocate to the alternate command center—“Site R”—earlier on, and Wolfowitz was transported there by helicopter (see (11:00 a.m.) September 11, 2001). (Goldberg et al. 2007, pp. 132; Vogel 2007, pp. 441) Site R is located inside Raven Rock Mountain, about six miles north of Camp David, on the Pennsylvania-Maryland border. (Schwartz 11/2001) According to authors Patrick Creed and Rick Newman, it “was designed as a duplicate of the NMCC” (the National Military Command Center, inside the Pentagon). “If an attack took out the NMCC, or it needed to be evacuated for any reason, Site R would become the Pentagon’s primary command center.” Since joining the Joint Chiefs of Staff in 1998 as its director of operations, Vice Admiral Scott Fry had “instituted regular drills and other measures to make sure Site R could rapidly get up to speed in an emergency, without glitches that might be fatal in a war setting.” (Creed and Newman 2008, pp. 174) Yet when he calls the Pentagon from this alternate command center, Wolfowitz reports that “the computer and communication systems there functioned poorly or not at all.” He is, however, able to participate in video teleconference calls. (Goldberg et al. 2007, pp. 132) These problems are not reported as causing any significant hindrance in the emergency response to the attacks. But Creed and Newman will comment: “The authority to order major military action rested jointly with the senior civilian leaders at both the White House and the Defense Department. Only they, together, could order troops to move, or missiles to fly. If the NMCC went down before Site R was up and running, the communications link required to utilize the nation’s military might be severed, for the first time since the system was put in place in 1947.” (Creed and Newman 2008, pp. 174-175)