This page can be viewed at http://www.historycommons.org/entity.jsp?entity=smain_lamari_1

Smain Lamari was a participant or observer in the following events: 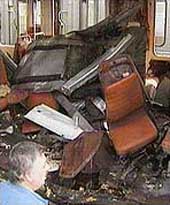 A Paris subway car bombed in 1995. [Source: Associated Press]Ten French citizens die and more than two hundred are injured in a series of attacks in France from July to October 1995. Most of the attacks are caused by the explosion of rudimentary bombs in the Paris subway. The deaths are blamed on the Groupe Islamique Armé (GIA) Algerian militant group. Some members of the banned Algerian opposition Islamic Salvation Front (FIS) living in exile in France are killed as well. For instance, high-level FIS leader Abdelbaki Sahraoui is assassinated on July 11, 1995. The GIA takes credit for these acts. The attacks mobilize French public opinion against the Islamic opposition in Algerian and causes the French government to abandon its support for recent Algerian peace plans put forth by a united opposition front (see January 13,1995). (BBC 10/30/2002; Randal 2005, pp. 171, 316-317; Bouteldja 9/8/2005) However, in September 1995, French Interior Minister Jean-Louis Debré says, “It cannot be excluded that Algerian intelligence may have been implicated” in the first bombing, which hit the Saint-Michel subway stop in Paris on July 25 and killed eight. (BBC 10/31/2002; Randal 2005, pp. 316-317) And as time goes on, Algerian officials defect and blame Algerian intelligence for sponsoring all the attacks. Ali Touchent is said to be the GIA leader organizing the attacks (see January 13,1995). But Mohammed Samraoui, former deputy chief of the Algerian army’s counterintelligence unit, will later claim that Touchent was an Algerian intelligence “agent tasked with infiltrating Islamist ranks abroad and the French knew it.” But he adds the French “probably did not suspect their Algerian counterparts were prepared to go so far.” (Randal 2005, pp. 316-317) A long-time Algerian secret agent known only by the codename Yussuf-Joseph who defected to Britain will later claim that the bombings in France were supported by Algerian intelligence in order to turn French public opinion against the Islamic opposition in Algeria. He says that intelligence agents went sent to France by General Smain Lamari, head of the Algerian counterintelligence department, to directly organize at least two of the French bombings. The operational leader was actually Colonel Souames Mahmoud, head of the intelligence at the Algerian Embassy in Paris. (Sweeney and Doyle 11/9/1997) In 2002, a French television station will air a 90-minute documentary tying the bombings to Algerian intelligence. In the wake of the broadcast, Alain Marsaud, French counterintelligence coordinator in the 1980s, will say, “State terrorism uses screen organizations. In this case, [the GIA was] a screen organization in the hands of the Algerian security services… it was a screen to hold France hostage.” (Campbell 2/14/2004)