This page can be viewed at http://www.historycommons.org/entity.jsp?entity=spain

Spain was a participant or observer in the following events:

Tayseer Allouni. [Source: Public domain / Antonio Casas]Al Jazeera reporter Tayseer Allouni makes several trips to Turkey and Afghanistan, taking money with him and giving it to people who are later said to be militants. Allouni, some of whose telephone conversations are recorded by Spanish authorities from the mid-1990s (see 1995 and After), makes numerous trips to Turkey and Afghanistan, carrying no more than $4,000 each time. Allouni’s associates include Mamoun Darkazanli and Mohammed Haydar Zammar, who are linked to 9/11 hijackers Mohamed Atta, Marwan Alshehhi, and Ziad Jarrah (see November 1, 1998-February 2001 and October 9, 1999), as well as Spain-based al-Qaeda operative Barakat Yarkas, who also is in contact with Darkazanli and Zammar (see August 1998-September 11, 2001). (Miles 2005, pp. 306-313) In 2000, Allouni is monitored by the Spanish government as he makes several trips to Afghanistan. His lawyer will later concede that he was given $35,000 by Yarkas, and Allouni will acknowledge that he did carry thousands of dollars from Yarkas to Afghanistan, Turkey, and Chechnya. (Crewdson 10/19/2003) However, Allouni will later say he is not a member of al-Qaeda and was only taking the money to friends and other Syrian exiles. He will later interview Osama bin Laden (see October 20, 2001) and be sentenced to jail for his alleged al-Qaeda membership (see September 26, 2005). (Miles 2005, pp. 306-313) 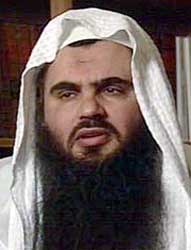 Abu Qatada. [Source: Public domain]Al-Qaeda religious leader Abu Qatada disappears, despite being under surveillance in Britain. He has been “described by some justice officials as the spiritual leader and possible puppet master of al-Qaeda’s European networks.” (Crumley 7/7/2002) He supposedly escapes from his house, which the police are monitoring, in a minivan with his heavily pregnant wife and four children. (McGrory, Ford, and Evans 10/25/2002; O'Neill and McGrory 2006, pp. 108) Qatada had already been sentenced to death in abstentia in Jordan, and is wanted at the time by the US, Spain, France, and Algeria as well. (Gillan et al. 2/14/2002) In October 2001, the media had strongly suggested that Qatada would soon be arrested for his known roles in al-Qaeda plots, but no such arrest occurred. (Leppard and Rufford 10/21/2001) In November, while Qatada was still living openly in Britain, a Spanish judge expressed disbelief that Qatada hadn’t been arrested already, as he has previously been connected to a Spanish al-Qaeda cell that may have met with Mohamed Atta in July 2001. (Harris 11/25/2001) Time magazine will later claim that just before new anti-terrorism laws go into effect in Britain, Abu Qatada and his family are secretly moved to a safe house by the British government, where he is lodged, fed, and clothed by the government. “The deal is that Abu Qatada is deprived of contact with extremists in London and Europe but can’t be arrested or expelled because no one officially knows where he is,” says a source, whose claims were corroborated by French authorities. The British reportedly do this to avoid a “hot potato” trial. (Crumley 7/7/2002) A British official rejects these assertions: “We wouldn’t give an awful lot of credence [to the story].” (Dodd 7/8/2002) Some French officials tell the press that Qatada was allowed to disappear because he is actually a British intelligence agent. (Burke 2/24/2002) It appears that Qatada held secret meetings with British intelligence in 1996 and 1997, and the British were under the impression that he was informing on al-Qaeda (though there is disagreement if he was misleading them or not) (see June 1996-February 1997). Qatada will be arrested in London on October 23, 2002 (see October 23, 2002). 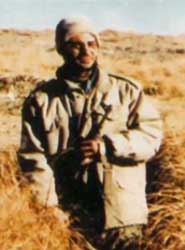 The 2007 PBS documentary “America at a Crossroads: The Brotherhood” will claim that Spanish investigators discovered this picture of Darkazanli holding a Kalishnikov rifle in Afghanistan. [Source: PBS]A Spanish judge issues an indictment against Mamoun Darkazanli and 34 others, alleging that they belonged to or supported the al-Qaeda cell in Madrid, which assisted the 9/11 hijackers in planning the attack. Darkazanli’s name appears 177 times in the 690-page indictment. He is accused of acting as bin Laden’s “financier in Europe.” “The list of those with whom Darkazanli has done business or otherwise exchanged money reads like a Who’s Who of al-Qaeda: Wadih El-Hage, bin Laden’s one-time personal secretary; [Tayyib al-Madani], the husband of bin Laden’s niece and, before 9/11, al-Qaeda’s chief financial officer; and Mustafa Setmarian Nasar, the head of a training camp for al-Qaeda in Afghanistan who journeyed to Hamburg to visit Darkazanli in 1996.” (Crewdson 10/5/2003) The CIA had been monitoring Darkazanli sometime before December 1999 and had tried to convince Germany to “turn” him into an al-Qaeda informant. However, the CIA refused Germany’s request to share information regarding Darkazanli’s terrorist ties in the spring of 2000 (see Spring 2000). (Crewdson 11/17/2002)

Mamoun Darkazanli. [Source: Associated Press]Mamoun Darkazanli, under investigation for ties to al-Qaeda long before 9/11, is finally arrested in Germany. The Chicago Tribune calls him “one of the most elusive and mysterious figures associated with al-Qaeda and the Sept. 11 hijackers.” He has been living openly in Germany since the 9/11 attacks. The reason for the timing of the arrest is unclear, but there is speculation it may be to preempt an attempt by Darkazanli to apply for asylum in Syria, the nation of his birth. Because German anti-terrorism laws were so weak until after 9/11, he cannot even be convicted of financing terrorism. However, he is also wanted in Spain where prosecutors have been building a case against him and his associates. Germany says it intends to extradite him to Spain, but Darkazanli claims he’s innocent and is going to fight the extradition. (Crewdson 10/15/2004)

At a UN meeting in Granada, the Convention on Biological Diversity’s “Working Group on Article 8(j)” meets ahead of the Convention’s eighth biennial meeting to discuss implementation of Article 8(j) and related provisions of the Convention, as requested by the seventh conference of the Convention that took place in 2004 in Kuala Lumpur. (Convention on Biodiversity 2/20/2004) Article 8(j) of the convention calls on member countries to protect the traditional knowledge, innovation, and practices of indigenous peoples and peasant farmers. One of the group’s tasks is to “consider the potential socio-economic impacts of genetic use restriction technologies on indigenous and local communities” and make a recommendation based on three previous UN reports (see February 19, 2003-February 21, 2003; February 7, 2005; September 26, 2000-September 28, 2000) and official submissions from indigenous peoples and farmers’ organizations (see September 26, 2005-September 27, 2005). In every one of these reports, terminator technology was considered a threat to the poor. In spite of this, the Australian, New Zealand, and Canadian governments, guided by a US representative (the US has not ratified the Convention on Biological Diversity) and industry lobbyists, push to make the Working Group’s recommendations supportive of terminator technology. Lobbyists for the seed companies include Harry Collins, vice president of Delta & Pine Land, and Roger Krueger of Monsanto. Delta & Pine Land jointly holds three patents on terminator technology with the US Department of Agriculture. According to the ETC Group, a Canadian-based organization opposed to terminator seeds whose representatives are present at this meeting, “With a US government official consulting at her side, the Australian negotiator insisted on deleting reference to the ‘precautionary approach’ and used this as a bargaining chip to win controversial wording for a ‘case-by-case risk assessment’ of terminator.” However, the efforts of these countries to draft a recommendation that would weaken the moratorium on terminator seeds are opposed by the majority of other parties, including Spain, the African Group, Egypt, the Philippines, Norway, Pakistan, Kenya, India, and Brazil. (ETC Group 1/27/2006; National Farmers Union 1/27/2006; Bueckert 1/30/2006) Australia refuses to budge and it is finally agreed to revise the recommendation to say that further research on terminator technology should include “a case-by-case risk assessment basis with respect to different categories of GURTs technology subject to the precautionary approach.” (Convention on Biodiversity 1/27/2005