This page can be viewed at http://www.historycommons.org/entity.jsp?entity=stephen_push

Stephen Push was a participant or observer in the following events: 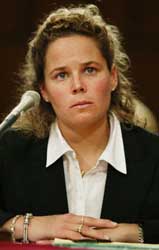 Kristen Breitweiser. [Source: Hyungwon Kang/ Reuters]Two 9/11 victims’ relatives testify before the Congressional 9/11 inquiry. Kristen Breitweiser, whose husband Ronald died at the WTC, asks how the FBI was so quickly able to assemble information on the hijackers. She cites a New York Times article stating that agents descended on flight schools within hours of the attacks. “How did the FBI know where to go a few hours after the attacks?” she asks. “Were any of the hijackers already under surveillance?” (Miklaszewski 9/18/2002) She adds, “Our intelligence agencies suffered an utter collapse in their duties and responsibilities leading up to and on September 11th. But their negligence does not stand alone. Agencies like the Port Authority, the City of NY, the FAA, the INS, the Secret Service, NORAD, the Air Force, and the airlines also failed our nation that morning.” (US Congress 9/18/2002) Stephen Push states, “If the intelligence community had been doing its job, my wife, Lisa Raines, would be alive today.” He cites the government’s failure to place Khalid Almihdhar and Nawaf Alhazmi on a terrorist watch list until long after they were photographed meeting with alleged al-Qaeda operatives in Malaysia (see January 5-8, 2000 and Shortly After). (Miklaszewski 9/18/2002)

Time magazine reports that the 9/11 Commission has requested an additional $11 million to add to the $3 million for the commission, and the Bush administration has turned down the request. The request will not be added to a supplemental spending bill. A Republican member of the commission says the decision will make it “look like they have something to hide.” Another commissioner notes that the recent commission on the Columbia shuttle crash will have a $50 million budget. Stephen Push, a leader of the 9/11 victims’ families, says the decision “suggests to me that they see this as a convenient way for allowing the commission to fail. they’ve never wanted the commission and I feel the White House has always been looking for a way to kill it without having their finger on the murder weapon.” The administration has suggested it may grant the money later, but any delay will further slow down the commission’s work. Already, commission members are complaining that scant progress has been made in the four months since the commission started, and they are operating under a deadline. (Burger 3/26/2003) Three days later, it is reported that the Bush administration has agreed to extra funding, but only $9 million, not $11 million. The commission agrees to the reduced amount. (Eggen 3/29/2003) The New York Times criticizes such penny-pinching, saying, “Reasonable people might wonder if the White House, having failed in its initial attempt to have Henry Kissinger steer the investigation, may be resorting to budgetary starvation as a tactic to hobble any politically fearless inquiry.” (listed] 3/31/2003) 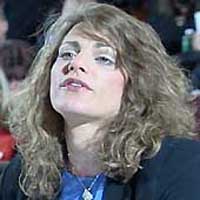 Mindy Kleinberg. [Source: Public domain]Following introductory statements by 9/11 Commissioners (see 9:15 a.m. - 9:45 a.m. March 31, 2003) and questioning of New York officials, several of the victims’ relatives testify on the first day of the Commission’s first hearing. One relative is selected from each of the four organizations they have formed. (Shenon 2008, pp. 102) The relatives are unhappy and, as the Miami Herald reports, “Several survivors of the attack and victims’ relatives testified that a number of agencies, from federal to local, are ducking responsibility for a series of breakdowns before and during September 11.” (Davies 3/31/2003) The New York Times suggests that the 9/11 Commission would never have been formed if it were not for the pressure of the 9/11 victims’ relatives. (Chen 4/1/2003) Some of the relatives strongly disagree with statements from some commissioners that they should not place blame. For instance, Stephen Push states: “I think this Commission should point fingers.… Some of those people [who failed us] are still in responsible positions in government. Perhaps they shouldn’t be.” (Waterman 3/31/2003) The most critical testimony comes from 9/11 relative Mindy Kleinberg, but her testimony is only briefly reported on by a few newspapers. (Waterman 3/31/2003; Hetter 4/1/2003; Chen 4/1/2003; Gould and Edozien 4/1/2003; Coscarelli 4/1/2003) In her testimony, Kleinberg says: “It has been said that the intelligence agencies have to be right 100 percent of the time and the terrorists only have to get lucky once. This explanation for the devastating attacks of September 11th, simple on its face, is wrong in its value. Because the 9/11 terrorists were not just lucky once: They were lucky over and over again.” She points out the insider trading based on 9/11 foreknowledge, the failure of fighter jets to catch the hijacked planes in time, hijackers getting visas in violation of standard procedures, and other events, and asks how the hijackers could have been lucky so many times. (9/11 Commission 3/31/2003)