This page can be viewed at http://www.historycommons.org/entity.jsp?entity=steven_hermes_1

Steven Hermes was a participant or observer in the following events:

Before November 2005: Mid-level CIA Lawyers Find No Bar to Destruction of Interrogation Videos 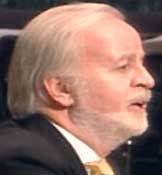 John Rizzo. [Source: C-SPAN]Guidance is issued by CIA lawyers Robert Eatinger and Steven Hermes to the CIA’s National Clandestine Service (NCS) on the preservation of videotapes of detainee interrogations made by the CIA. (Mazzetti and Shane 12/19/2007) The guidance is apparently used as justification for the tapes’ destruction (see November 2005), but its content is unclear. According to one account, “Lawyers within the clandestine branch of the Central Intelligence Agency gave written approval in advance to the destruction in 2005 of hundreds of hours of videotapes documenting interrogations of two lieutenants from al-Qaeda.” (Mazzetti and Shane 12/11/2007) Another account supports this, saying the lawyers give “written guidance to [CIA manager Jose] Rodriguez that he had the authority to destroy the tapes and that the destruction would violate no laws.” (Mazzetti and Shane 12/19/2007) However, according to another account: “[The guidance] advises that there is no explicit legal reason why the Clandestine Service had to preserve the tapes… The document does not, however, directly authorize the tapes’ destruction or offer advice on the wisdom or folly of such a course of action.” (Isikoff and Hosenball 12/11/2007) Some CIA videotapes have been requested for court proceedings, meaning such tapes should not be destroyed, but it is unclear if the tapes that are destroyed in November 2005 have been requested by courts or not (see May 7-9, 2003 and November 3-14, 2005). The CIA’s top lawyer, John Rizzo, is not asked for an opinion, although he has been involved in discussions about what to do with the tapes for years and several high-ranking officials and legislators are of the opinion that the tapes should not be destroyed (see November 2005). (Mazzetti and Shane 12/11/2007) Eatinger and Hermes apparently inform Rizzo they have issued the guidance and expect Rodriguez will consult him before destroying the tapes, but Rodriguez does not do so. (Mazzetti and Shane 12/19/2007) The New York Times will comment, “It is unclear what weight an opinion from a lawyer within the clandestine service would have if it were not formally approved by Mr. Rizzo. But [an anonymous former official] said Mr. Rodriguez and others in the clandestine branch believed the legal judgment gave them the blessing to destroy the tapes.” The former official will also say they “didn’t need to ask Rizzo’s permission.” (Mazzetti and Shane 12/11/2007) A lawyer acting for Rodriguez will later say, “He had a green light to destroy them.” (Mazzetti and Shane 12/19/2007) However, other former CIA officers will express surprise that a lawyer junior to Rizzo would approve such a controversial decision without asking for his input. Former CIA lawyer John Radsan will say, “I’d be surprised that even the chief [NCS] lawyer made a decision of that magnitude without bringing the General Counsel’s front office into the loop.” He adds, “Although unlikely, it is conceivable that once a CIA officer got the answer he wanted from a [NCS] lawyer, he acted on that advice… But a streamlined process like that would have been risky for both the officer and the [NCS] lawyer.” (Mazzetti and Shane 12/11/2007)