This page can be viewed at http://www.historycommons.org/entity.jsp?entity=task_force_121__1

Task Force 121 was a participant or observer in the following events: 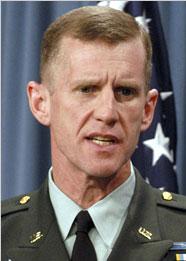 Lieutenant General Stanley McChrystal. [Source: DoD photo by Helene C. Stikkel/Released, via Reuters]Secretary of Defense Robert Gates and the chairman of the Joint Chiefs of Staff Admiral Michael Mullen announce the nomination of controversial former special/black operations commander Lieutenant General Stanley McChrystal to replace the top US commander in Afghanistan, General David McKiernan. At the Pentagon, Gates explains that “new leadership and fresh eyes” are needed to reverse the course of the seven-year-old war. “We have a new strategy, a new mission, and a new ambassador. I believe that new military leadership also is needed,” he says. The White House confirms that President Obama has signed off on the nomination. McChrystal is the former commander of the secretive Joint Special Operations Command (JSOC), which during his tenure was tied to prisoner abuse and covert assassinations in Iraq, as well as controversy in the military’s handling of the death of Pat Tillman in Afghanistan. McKiernan will remain in place until the Senate confirms the appointments of McChrystal and his designated deputy, Lieutenant General David Rodriguez, also a veteran of elite US forces. Both officers have experience in Afghanistan and have more familiarity with counterinsurgency operations than McKiernan. Gates says that McChrystal and Rodriguez will “bring a unique skill set in counterinsurgency to these issues, and I think that they will provide the kind of new leadership and fresh thinking that [Admiral Mike Mullen] and I have been talking about.” (CNN 5/11/2009; Tice 5/11/2009)
Prisoner Abuse, Geneva Convention Violations - Under McChrystal’s command, the Joint Special Operations Command supplied elite troops to a secret unit known variously as Task Force 626 and Task Force 121, based at Camp Nama (an acronym for “nasty ass military area”) near Baghdad. A Human Rights Watch report found evidence that the task force engaged in prisoner torture and abuse, and that the JSOC command likely violated the Geneva Conventions (see November 2004). According to the report, which was based on soldier testimony, inmates at the camp were subjected to beatings, exposure to extreme cold, threats of death, humiliation, and various forms of psychological abuse or torture. The report’s sources claimed that written authorizations were required for abusive techniques—indicating that the use of these tactics was approved up the chain of command—and that McChrystal denied the Red Cross and other investigators access to Camp Nama, a violation of the Geneva Conventions. (Schmitt and Marshall 3/19/2006; Sifton and Garlasco 7/22/2006; Doyle 5/17/2009)
Secret Assassinations - During McChrystal’s tenure as head of JSOC, he led campaigns to track down, capture, or kill enemies. To this end, McChrystal built a sophisticated network of soldiers and intelligence operatives to assassinate Sunni insurgent leaders and decapitate al-Qaeda in Iraq. He is also understood to have led the hunt for Osama bin Laden and other al-Qaeda leaders in Afghanistan and Pakistan. However, a Human Rights Watch report on the secret units under JSOC command states that although targets included Saddam Hussein and Abu Musab Al-Zarqawi, the operations also swept up “hundreds of anonymous, and often innocent, detainees.” One senior Pentagon officer, quoted by the Washington Post, warns, “People will ask, what message are we sending when our high-value-target hunter is sent to lead in Afghanistan?” (Sifton and Garlasco 7/22/2006; Tyson 5/13/2009) Newsweek has noted that JSOC is likely part of what then-Vice President Dick Cheney was referring to when he said America would have to “work the dark side” after 9/11 (see September 16, 2001). (Hirsh and Barry 6/26/2006) Furthermore, investigative reporter Seymour Hersh has reported that JSOC ran what he called an “executive assassination wing” that reported directly to Cheney’s office, which then cleared lists of people to be targeted for assassination by secret JSOC units (see March 10, 2009 and March 31, 2009).
Pat Tillman Silver Star Controversy - The Pentagon’s inspector general found McChrystal responsible for promulgating false and misleading information in the aftermath of the “friendly fire” death of Pat Tillman in 2004. In the controversy, McChrystal had approved paperwork recommending Tillman for a silver star, which stated that he died from “devastating enemy fire,” despite knowledge of internal investigations pointing to friendly fire as the cause of death (see April 29, 2004) and April 23-Late June, 2004). McChrystal then backtracked only when he learned that then-President Bush was about to quote from the misleading silver star citation in a speech. The US Army later overruled the Pentagon inspector general’s recommendation that McChrystal be held accountable for his actions. (Lindlaw and Mendoza 8/4/2007; Doyle 5/17/2009)