This page can be viewed at http://www.historycommons.org/entity.jsp?entity=terry_marker_1

Terry Marker was a participant or observer in the following events: 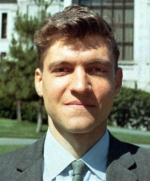 A photograph of Theodore ‘Ted’ Kaczynski, taken in 1968 while Kaczynski was a young faculty member at the University of California at Berkeley. [Source: George M. Bergman / Wikimedia]An unmailed package is found in a car park at the University of Illinois, Chicago, and brought to Northwestern University in Evanston, Illinois, because of its return address; the addressee now teaches at Rensselaer Polytechnic Institute in Troy, New York. Buckley Crist, the material sciences professor named in the return address on the package cannot identify it, and turns it over to campus security. When Northwestern police officer Terry Marker opens it, it explodes, injuring him slightly. The package contains a pipe bomb packed in a carved wooden box. (BBC 11/12/1987; Lardner and Adams 4/14/1996; Washington Post 1998) The bomb is made of a nine-inch pipe filled with explosive powders and triggered by a nail held by rubber bands that strikes and ignites match heads when the box is opened. (World of Forensic Science 1/1/2005) The package contains 10 $1 commemorative Eugene O’Neill stamps on its outer wrapper. Authorities will later speculate that the bomber may have chosen the O’Neill stamps because the playwright was an ardent supporter of anarchists. (Goldston 5/28/1995) The bombing will later be shown to be the work of Theodore “Ted” Kaczynski, the so-called “Unabomber” (see April 3, 1996). It is believed to be Kaczynski’s first bomb. (Perez-Pena 4/7/1996)