This page can be viewed at http://www.historycommons.org/entity.jsp?entity=the_shepperd_group_1

The Shepperd Group was a participant or observer in the following events: 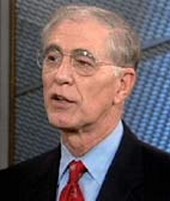 Donald Shepperd, on the June 24 CNN broadcast. [Source: CNN]Within hours of returning from a Pentagon-sponsored “fact-finding” trip to the Guantanamo detention facility (see June 24-25, 2005), CNN military analyst Don Shepperd, as planned (see June 25, 2005), extolls the virtues of the Pentagon’s handling of detainees on a lineup of CNN news broadcasts. As per his most recent briefing, he does not mention the case of Mohammed al-Khatani (see August 8, 2002-January 15, 2003), who has suffered extensive brutality at the hands of his captors. Instead, his “analyses” are so uniformly laudatory that, as commentator Glenn Greenwald will observe, they are “exactly what it would have been had [Defense Secretary Donald] Rumsfeld himself written the script.” After returning from his half-day visit, he participates in a live telephone interview with CNN anchor Betty Nguyen. He opens with the observation: “I tell you, every American should have a chance to see what our group saw today. The impressions that you’re getting from the media and from the various pronouncements being made by people who have not been here, in my opinion, are totally false. What we’re seeing is a modern prison system of dedicated people, interrogators and analysts that know what they are doing. And people being very, very well-treated. We’ve had a chance to tour the facility, to talk to the guards, to talk to the interrogators and analysts. We’ve had a chance to eat what the prisoners eat. We’ve seen people being interrogated. And it’s nothing like the impression that we’re getting from the media. People need to see this, Betty.… I have been in prisons and I have been in jails in the United States, and this is by far the most professionally-run and dedicated force I’ve ever seen in any correctional institution anywhere.” Shepperd watched an interrogation, and he describes it thusly: “[T]hey’re basically asking questions. They just ask the same questions over a long period of time. They get information about the person’s family, where they’re from, other people they knew. All the type of things that you would want in any kind of criminal investigation. And these were all very cordial, very professional. There was laughing in two of them that we…” Nguyen interrupts to ask, “Laughing in an interrogation?” and Shepperd replies: “In the two of them that we watched. Yes, indeed. It’s not—it’s not like the impression that you and I have of what goes on in an interrogation, where you bend people’s arms and mistreat people. They’re trying to establish a firm professional relationship where they have respect for each other and can talk to each other. And yes, there were laughing and humor going on in a couple of these things. And I’m talking about a remark made where someone will smirk or laugh or chuckle.” In another CNN interview three days later, Shepperd reiterates and expands upon his initial remarks, and says of the detainees: “[W]e have really gotten a lot of information to prevent attacks in this country and in other countries with the information they’re getting from these people. And it’s still valuable.” CNN does not tell its viewers that Shepperd is president of The Shepperd Group, a defense lobbying and consulting firm. (CNN 6/24/2005; Greenwald 5/9/2008)